I am Craven Edge, and I always hunger

My nephew wanted to do a Halloween costume of a character from a popular D&D show, Critical Role. He and his girlfriend wanted to dress up as Lord and Lady Briarwood, and Lord Briarwood’s sword, Craven Edge, is integral to the story. It’s described as a large two handed sword made of onyx, so I had a bunch of latitude on how to build it. Here’s how it ended up.

I started with the blade, cutting and engraving using the passthrough. This is two layers of 1/8" BB glued together to make a 1/4" blade. I sand an “edge” into it, I don’t truly sharpen it but I think the slight bevel helps sell the whole look. I used a black acrylic ink that had really great coverage (surprisingly black wood stain gave terrible coverage), painted the runes in with gold acrylic ink, then finished with a few layers of gloss polyurethane.

A closeup of the crossguard and handle assembly. The inlay was done on 1/8" material that was glued onto the 3 1/4" thick layers of the crossguard. it ended up being quite sturdy with an overall thickness of about an inch. 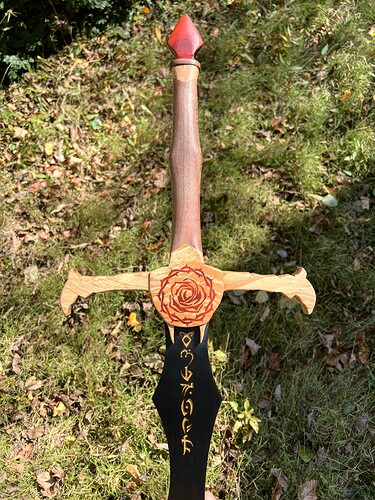 The pommel is 3 layers of 1/4" thick padauk. I cut the parts, then glued it up into a solid blank of about 3/4" thick. I roughly shaped it using a belt sander and then the final steps were all by hand with strips of sandpapers. 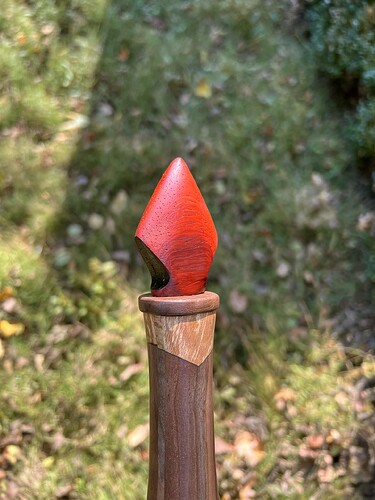 It’s pretty and I knew he’s want to display it so I rigged up a wall mount. 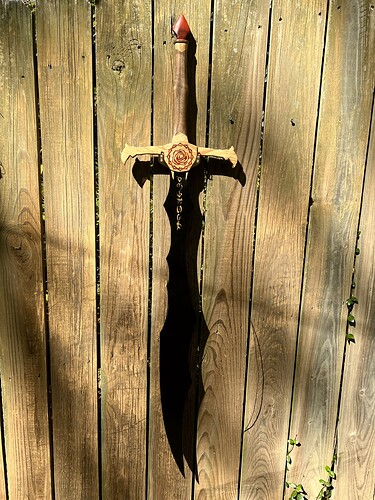 More detail on the mount. 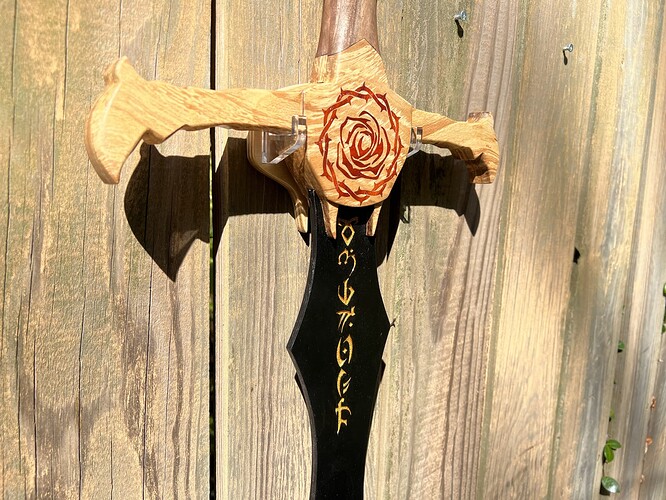 A good look at the rose motif and the wall mount design. The rose/thorn motif is the same design of the inlay, a reference to the name Briarwood. True Critical Role spoiler: The shape is a not-so-subtle set of fangs, as Lord Briarwood is secretly a vampire. The fang motif is also present in the blade crossguard. 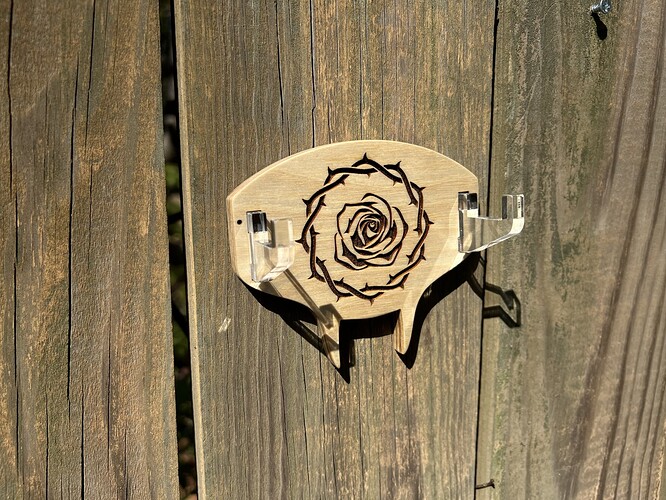 A closeup of the handle, because I mean look at that walnut. So pretty. I spend a fair amount of time sanding the handle to just the right shape. This is the part of the sword you interact with so it should be as smooth and pleasing to hold as possible. 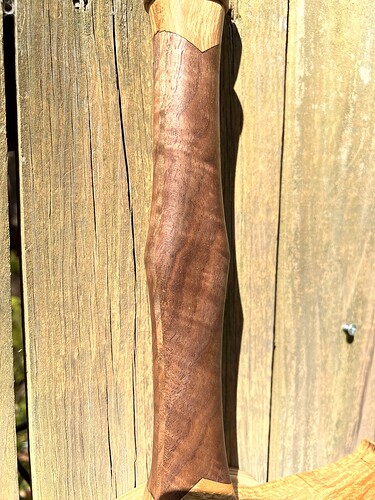 The tip of the blade is actually quite sharp, and since the sword is 49" overall it would be pretty easy to acidentally damage the blade or poke someone. I made a slip-on tip guard that uses friction (with the leather liner) and hinged captive magnets to grab onto the blade.

And here it is at the costume party: 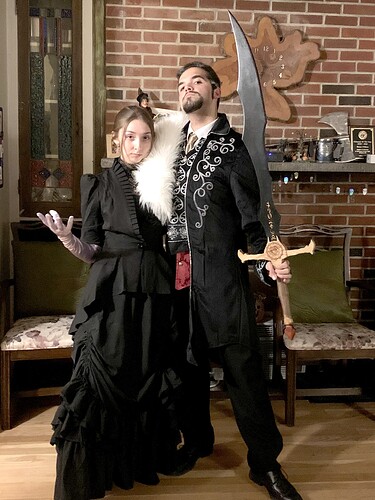 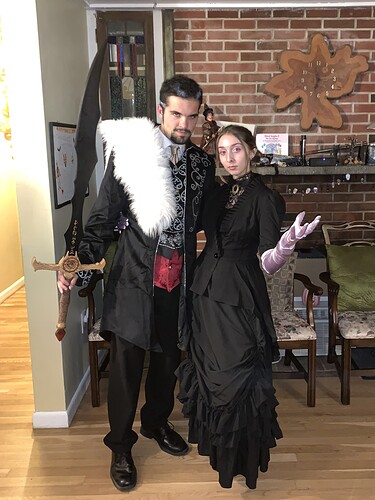 So yeah, fun project. I’ve made a number of other wooden swords before. If you’re curious, you can find them here:

very nicely done. i need to try making a sword.

the acrylic ink looks good. you can also get very dark, very even coverage with india ink. i did some staining of a small sign mockup and it worked fantastic.

Yeah I was amazed at how poorly the stain worked, it’s varathane ebony. The acrylic ink (liquitex brand) just immediately saturates the fibers of the BB. Far better deeper black than the varathane.

it’s not the stain. i’ve never found BB to be great at taking stain. and stain, by default, is also intended to allow the grain to show through. if you use ink, it will blacken everything. it works better than paint because it’s not on top, it’s into the wood. and better than stain because it covers more like paint.

I used a black acrylic ink

I still have some black 3.0, but I wanted the grain to be (subtly) visible. My thinking was that paint would have obscured that. I like that you can tell that the entire thing is made of wood on close inspection.

not that i expect your nephew to be dueling with it, but the ink won’t chip off the way paint might. i would consider that an extra bonus.

consider that an extra bonus

Yeah if it came to it and the blade did chip or otherwise get damaged, he could use a sharpie to touch up the black and then hit it with a tiny bit of wipe on urethane. It seems that it survived the party with no damage though, so no need to go down that path yet.

As for duelling, he’s the same nephew that has the Xiphos-style sword too. He’s pretty sensible though, so I think we’re mostly safe? The two swords are pretty similar in length, but Telikos has a 3-layer blade and is significantly more massive and sturdy. I would go with that one if it were my duel

Props to the uncle for making a great prop! That sword is terrific.

Lord and Lady Briarwood would be proud!

The sword pictured with them, shows the true size (no banana here). What an intricate and elegant design!

That had better be Lord and lady Briarwood cosplays!!!

Yeah that was their couples Halloween costume

Holy smokes! That turned out to be way bigger than I thought it was. Super nice job on that, the design details remind me of Weta Workshop. Love the costumes, they work so well with the sword.

Amazing. Off to blacksmith school with you already! You need to work with cold hard steel

Love it! And great use of gluing up multiple layers!