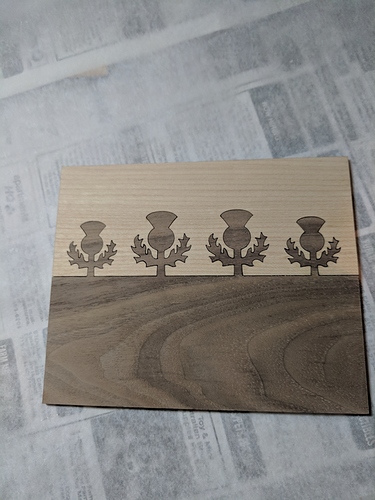 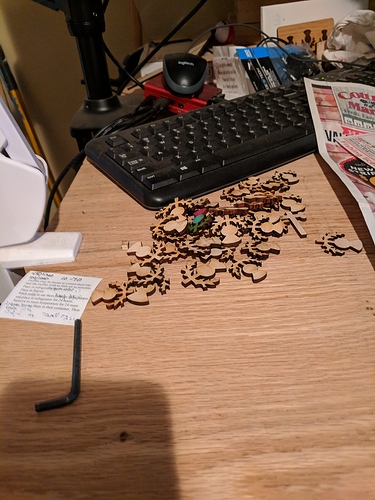 trialanderror.jpg3036×4048 3.14 MB
And finally I got the idea to check the inkscape file. Until now, all of my joins and inlay have been done on pretty regular shapes and block letters. I haven’t had any issues, just a little more waste than I want dialing in the kerf. The thistles were traced from a png and some paths simplified and nodes manipulated in inkscape. When I did a stroke to path, turned off the fill and made the strokes really thin, it was clear the problem was in inkscape, or at the very least my use of it. The distances between the inner and outer lines as you went around the thistles varied. Just in case it isn’t clear (the following is as good a kerf correction as I could obtain): 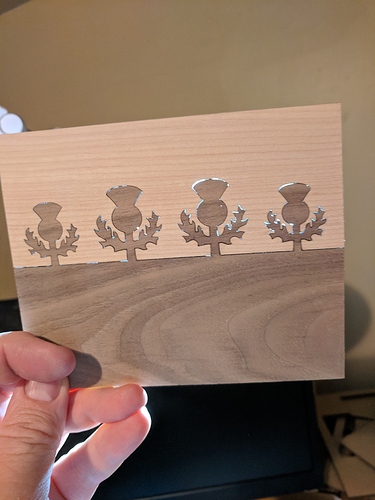 bad_kerf.jpg3036×4048 2.87 MB
From the start I had intended on making an inner box from maple with these butt joined panels glued to it. So while the gaps aren’t ideal, they are at least hidden. 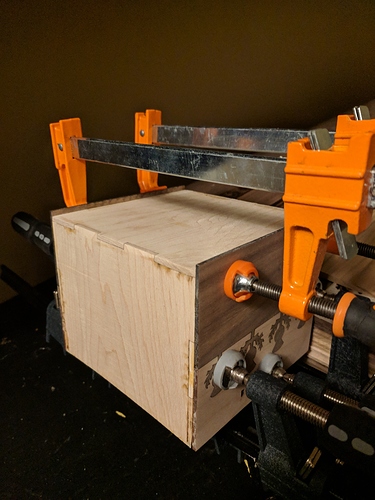 gluestobox.jpg3036×4048 3.28 MB
So the sad part is I made this for the dad of someone I know. She had gotten Toby as a puppy, but was too young to really take care of him without roommate conflicts and what not. Her dad took in Toby and they couldn’t be separated for nearly 17 years. 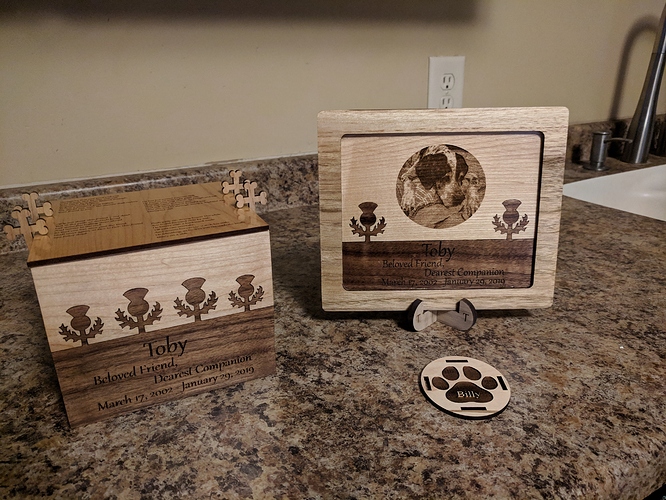 boxandmemorial.jpg4048×3036 3.99 MB
Originally the box was supposed to go into the ground, but after seeing it half-completed she said, “there is no way he is burying that. It’s going on the mantel forever.” So I made it extra shiny. The photo doesn’t really convey the depth and contrast of the finish or the richness of the walnut.

The frame and stand for the memorial plaque is 1/4" butternut. The gift tag is unfinished maple (I wrapped the memorial plaque.) I used the glowforge to vaporize away about an 1/8" of butternut so the plaque would lay into it. Everything else started out as a little bit over 1/8" stock, but after sanding is a bit thinner.

The dog bone crosses keep the top on and their holes helped a lot in gluing two of the sides to the box. Once those two sides were on the front and back were very easy to align and clamp down. Used yellow wood glue on everything but the butt joins were I used a CA glue. 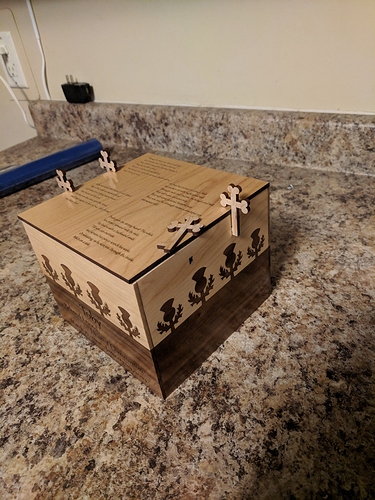 What a lovely memorial box! (And the thistles are perfect for that technique.)
Nicely done.

Thanks for the write up. Lots of work, but really great result.

The dog bone crosses just about pushed me over the edge. But if he lived 17 years, it’s clear he had a good life. You did a lovely job on that box, kerf issues and all.

This is such a lovely tribute.

You did such a special job on this - such a respectful and beautiful tribute.

Beautiful work on that, and no way I would bury it either.

An old man said every dog he ever had gave him a piece of its heart, and that he did the same in return, and by the time he died his heart would be all dog - and he would see and love the world as they did.

If there are no dogs in heaven, when I die I want to go where they went. - Will Rogers

What a wonderful, and thoughtful project. Excellent work!