This is yet another test. But, I’m SUPER happy with the scoring part of it. I have been experimenting with how wide can I get a score, rather than engraving and waiting for hours. The lines on this piece are all scores and took 18 minutes. I told the GF that the material was 0.5" thick, but it was actually 0.58" from the bottom of the machine, so about 1.35" down from the focus point. The score lines are about 0.1" wide and 0.008" deep. (2.8mm x 0.2mm). I added the infills later, so lost my settings, but I think the score was full power, but about half speed. A lot of fire… I had tried it at full speed/full power, but the lines weren’t solid and weren’t as wide.

The image is 7" x 11". Then I started to play with engraves and that’s when things went haywire. The chevrons and most other really dark areas are all full speed, 90% power, 125dpi. The lighter vertical rectangles were done at full speed, 55% power, 75dpi. But, this took two tries. So, some of the ones on the right are too dark because they got one pass that was already too dark, and another pass after I cancelled and ran again at a lower dpi.

It could still use a light sanding, but that’s out in the cold garage… and this is only a test anyway. I’ve included the svg file if anyone would like to use it. It’s copyrighted probably by the Frank Lloyd Wright Foundation, so don’t sell it. 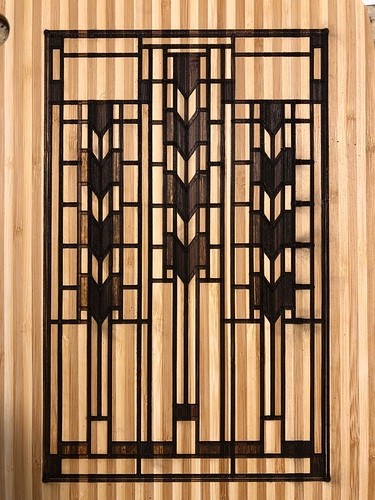 After washing (no sanding necessary) Lost some contrast. 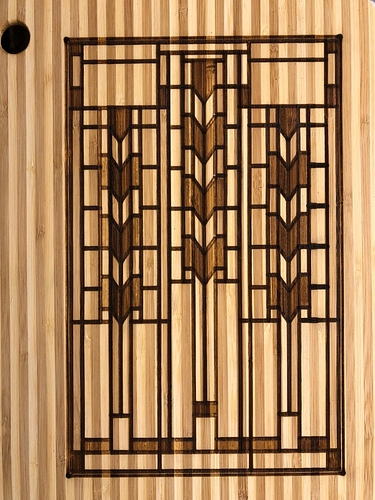 Very nice.
The darker it is, the more fragile - closer to ash. I can see in some cases you would want to preserve that ‘patina’ with a clear coat.

I really like this idea, and your example came out great! I’ve defocussed on acrylic (worked really well) but not on wood. I’ll add it to my todo list.

Looks good! What if you defocus in the opposite direction (tell

it is taller than it is)? Is there a difference (wood or acrylic) if you focus laser above or below the surface?

What if you defocus in the opposite direction

I’ll leave that answer to someone that knows more about lasers.

Just theorizing, but I would think the effect would be essentially the same.

I saw something online about focusing into the middle of an acrylic block and it doesn’t disrupt the surface at all. Not something I think I’ll need to try.

I saw something online about focusing into the middle of an acrylic block and it doesn’t disrupt the surface at all.

Different kind of laser. That’s the kind that creates those designs that are on the inside of a block of acrylic. Low wattage CO2 lasers like ours can’t do that.