I’m fairly new to using this machine and I’m completely bewildered by a problem that I’ve run into. I’m making character sheet folders for the Star Wars TTRPG campaign that I’m in and I’m really struggling getting the Star Wars logo to come out clean. I’m using black folders and, after the first two attempts went poorly, I ran a sheet on cardstock with a bunch of different settings. What I don’t understand is why (or HOW) I’m getting a blotchy or almost ombre effect on some of them. I used the same settings as one of the clearest ones here on the folder and got an inconsistent result.

This is my test sheet. There is NO glare on this image. That’s actually how it looks. (Sorry if it’s a little blurry. I have a tremor and this was the best I could do.) 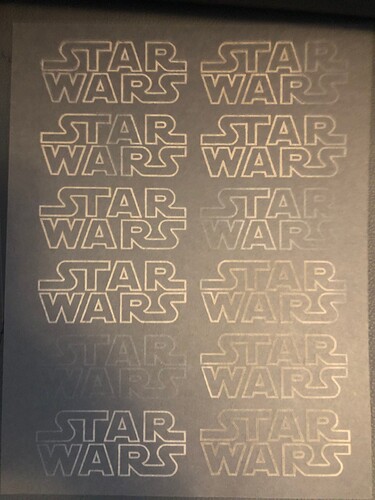 If it were darker or lighter in the same places every time, I feel like I’d have some clue as to what is going on. As it is, I’m completely in the dark. Any suggestions?

If you look under the left side at the end of the gantry is a little round window that the laser beam jumps to the head that has a similar window. If any crud (even the slightest) is on the window the beam will be blurred. that slight blurring will be less significant on the left where the distance is short than the right where the distance is long.

If it has just shown up when it was working before then that is pretty much the only cause. It does look a bit odd in your case as it is more like a band with the extreme right stronger than just to the left of it. Sometimes that can be just a variation in the wood, but it can also be a warp in the material that , the place it works less is a different height than the rest, the vertical range of highest temp is amazingly short so you want the hold down pins to keep the material very flat.

With the “draftboard” it can also be dampness as it will soak water out of the air and any water will make a big difference in the amount of energy needed to get the same effect.