Not sure what made them make the change, probably their partnership with JoAnn stores, but this new label is massive. It’s just one big sticker. I’m already in the habit of manually changing my settings, and only keep the QR codes on to save me on having to select which material is in the machine (which only works half of the time, anyway), and so I know which side has a nicer grain (seems the backside of PG isn’t as aesthetic as the other). I eventually have to remove the label on some of the sheets for a consistent engrave, but for cuts it’s not a big deal.

Anyway, the other change I noticed in the shipment was that the entire order was sealed in plastic, rather than wrapped. Thought that was an interesting addition. 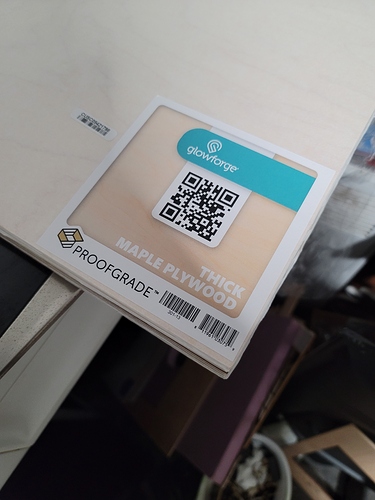 Those barcodes all but confirm it’s a change for retail, and the larger, more bold font must be for easier spotting and identifying while walking down an aisle.

When I first saw the label posted, I figured it was a 2 part label - the larger, more visible retail type sticker, with the regular QR code sitting in a cutout.

On the one hand, it’s nice to be able to tell what the material is really easily without having to peek under the masking, but dang it takes up a lot of real estate.

I had hoped it could be peeled away and separated - now that would be a cool design! Unfortunately, just one big sticker, and just another routine to get in the habit of peeling off when needed.

I can tell you exactly why they aren’t easily removable. To prevent theft in stores - people would swap draftboard stickers onto walnut and such.

If you order online, you should get small, unobtrusive tags in the unprintable area.

Not sure what made them make the change

easier to read with a blurry dirty lid camera

I was thinking the same thing. My camera no longer reads QR code’s, apparently. Even when clean.

Smoke particles have worked their way inside the camera and settled on the inside of the lens. They are not airtight, but they set the focus by melting the plastic on the thread. I’ve tried to break mine free but gave up as I didn’t want to risk permanent damage.

Tip of a soldering iron or similar where the lens cap meets the threads. It’s done on most fixed-focus cameras of this type. It will often break free as the plastic is brittle, but it wouldn’t with “reasonable force” on the GF camera.

I doubt GF assembly is doing it - they probably come with focus pre-set by the manufacturer.

Smoke particles have worked their way inside the camera

So this would be speculation then?

I’d be kind of surprised. If it were a lens that had moving elements, I could see that, since those breathe/exchange air. But then again, I’m surprised a lot.

i have a hunch that this is speculation

I would rather they just stamped the label on the cover paper. No sticker. I would think it wouldn’t have to be peeled off to engrave in that area.

So is the thought process here saying that JoAnn will or may start selling proofgrade materials?

Some are already selling it and have been for some time. It would t surprise me if they eventually partnered with other craft locations eventually, so a move like this is beneficial to any retail setting. I’m not a fan, personally, of the new label, but I can see how they’d justify it this way.

I looked at my local JoAnn’s and they are not offering proofgrade material as of yet, but as you say, it might happen in the future. What I have started doing is scan the current sticker and make a label to lace on my non proofgrade material. I just use a full sheet label and just scan the QR plus a bit more then lay it down on my masked material. Saves time because I don’t have to enter manual settings. The sticker s quite large, so I just shrunk it down some.

You could just select the material at the top left corner of the app instead of making stickers. This would take even less time.

I’ve had my machine long enough that the default settings don’t even cut through anymore, so I’ve got a bunch of custom settings in there. I was just thinking today how normal it is for me to change the material manually (when I need to, because my machine struggles detecting them most of the time) and change to one of my personal settings for cuts or engraves.

I would also prefer them to just ink a QR code with a name of the material, the stickers only get in the way.