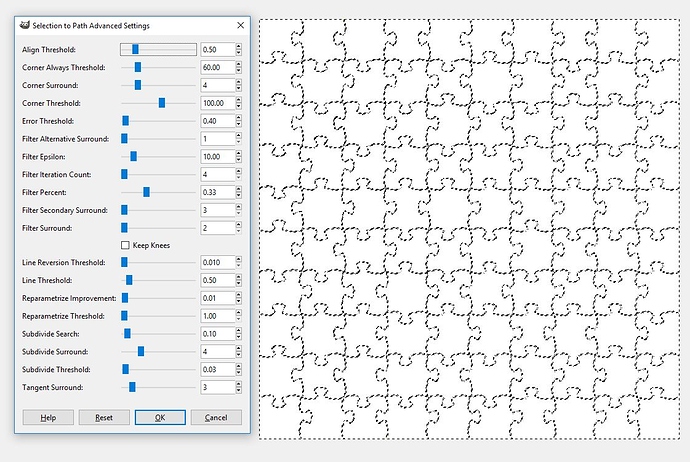 the puzzle is a standard feature automatically done, and the path settings should produce a vector file so you should be able to do thousands of different random puzzles for as many pictures as you want to make, and all very quickly.

I had no idea that that little gem was in there! Now figure out all those settings and teach them to us!

Looks great! Can you upload a sample SVG/vector file? I’d like to see how the pieces are created - as in, are the pieces all separate shapes or are they the result of paths in rows and columns that intersect and look like puzzle pieces?

I have not had the time to explore fully the paths to vectors formatting though it may need to be dxf first, and then svg. not having my GF yet I cannot try it. however Just playing I also did this. 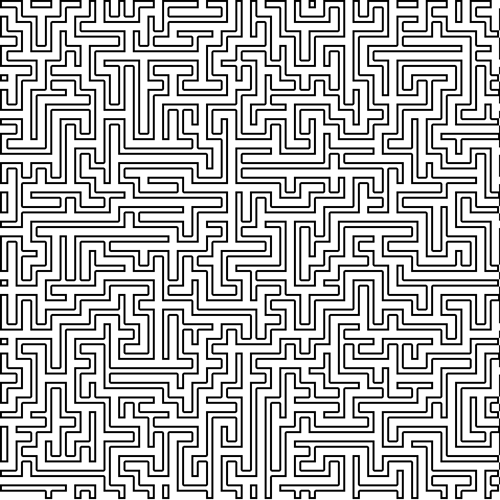 How does one access this feature? I have gimp open and I can’t find it.

Probably in plugins… I’ll look in a minute.

it is in filters and rendering from there

Awesomesauce! I found it.

The maze one is cool too!

Nice! The reason I ask is that some generators do it by pieces and some do it by intersecting lines across rows and columns. The lines method is much more suited to laser cutting. When they are pieces, you’ll have double cuts where all of the pieces meet. If you want to upload a puzzle sample in SVG, I can take a look at it when I get back to the computer.

Here is where it lives: 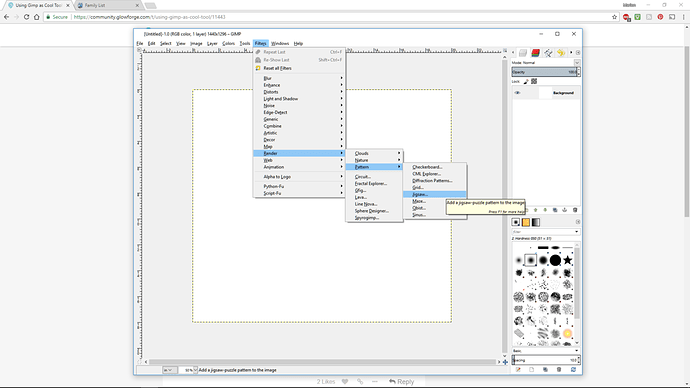 I can create the puzzle pattern but GIMP is still defeating me in turning it into a path to export.

That is seriously cool! Now I’m wondering why such things don’t exist for Adobe Illustrator? Or is it that they do exist but you have to buy them maybe?

Oops, I meant Photoshop, but same thing for Illustrator. I’m seeing all kinds of capabilities in the free Inkscape that I don’t see in Illustrator.

I believe you may be correct. The last plugin I picked up was a couple hundred bucks.

One thing I have noticed about expensive “commercial” software vs Open Source is the great difference in motives of the programmers. In commercial software, they are less interested in the folks who already purchased it than those who have not, and their main focus is programming and not using it. As a result, they want early success, and ease of use for those who just bought it. A common thing is a decision tree that you can make many small decisions that will get you where you wanted.

Now for the experienced user, they will already know where they want to go and having to make five commands and a return that yes you really want that can be tedious and annoying, and single or two letter commands that just do it and the more the letters are at the lower left side of the keyboard the better, as that is where your free hand is.

So it is that with Open Source that they are mainly advanced users who are capable as programmers making things work best for themselves and are extremely efficient for those experienced with the program, but daunting for newcomers. As nobody stays a newcomer forever I find this approach best. This is why such gems exist in Open Source because someone thought it would be nice to have it, and not in commercial software because no programmer imagined the need.

Very we’ll said! And Amazing find! Thanks so much. I will have to play around with this for sure.

Yeah the only paid item i use in my photography workflow is Adobe Lightroom… and that was only because i got full ownership (as opposed to monthly fee) and bought it at a special highly discounted price.
GIMP is great
Infranview is fantastic for very very quick & easy manipulations

and that was only because i got full ownership (as opposed to monthly fee) and bought it at a special highly discounted price.

The Australian discount? I kid, I kid!

Lightroom is indispensable if you have a large catalog of images that you actually do stuff with. Last I remember, the Photoshop/Lightroom combo was $9.99USD a month, which ain’t bad for SAAS and you are making money/using your stuff.

The Australian discount? I kid, I kid!

LOL, no!
Actual ca$h money was used… not pirate booty.

Special Offer with a Student discount thanks to the wife who was still working on her latest Masters (after 3 i think she gets a free set of Steak Knives).

Lightroom is indispensable if you have a large catalog of images

I can come back from an hours dive with up to 200 images in RAW. Nothing can process them as efficiently and effectively as Lightroom.

I use Lightroom all the time! Love it! I used ifanview a long time ago but had forgotten about it. I will have to dig it out and dust it off as well.

That is the hubris of Open Source. It sometimes even works out that way.

I’ve been writing software, from video game cartridges to shrink wrapped apps, to mobile games, to class libraries. Some where we shipped the source code (even from Microsoft, in 1992) and others completely closed source.

What I have found is that many Open Source projects suffer from the, “it’s good enough for me to use…no matter that it’s not intuitive nor documented,” syndrome.

Believe me, the developers inside companies are just as inventive as those outside. The difference is often that the business has filters in place to help focus development towards actually releasing something, and doing it at a certain quality bar. Some companies do that better than others, and some give their people more time to explore.