I replaced the included bendy, flimsy, dryer hose with a stiffer one with white plastic screw on ends. Commonly available at ACE hardware and the like (not at OSH, for some reason) for less than $20.

It resulted in a MASSIVE improvement to fume removal during cutting. As in, my garage took on a distinct campfire smell over the course of a cut whereas there is zero smell now, even after 2 hours of heavy engraving.

To join the plastic end to the GF, I used a bit of sticky backed high heat gasket (used to repair Big Green Eggs, coincidentally). That produces a fit that is almost tight enough to stick on its own. Not quite. Had to use some gaffers tape to hold it in place. The gasket produces an airtight seal, though.

(1) The included hose is really sub-optimal. Unless you have a dead straight run and/or support the bends, the hose sags, creating more air drag. And the interior is basically a spiral sawtooth, which blocks more air flow. A better solution would be welcome.

Suggestion: I get why it only sticks out as much as it does. How about some conveniently placed bits of steel or super magnets in the case that could be used for magnetic coupling purposes? Then, maybe, you could also sell a couple of different styles of hose couplers in the Glowforge store? 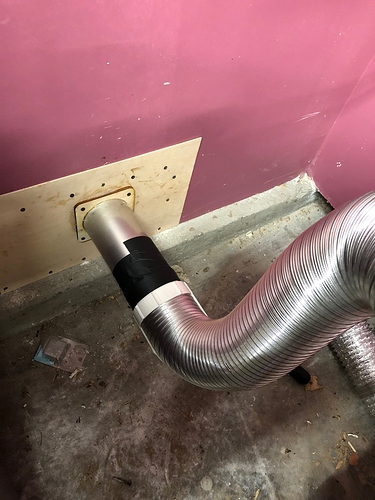 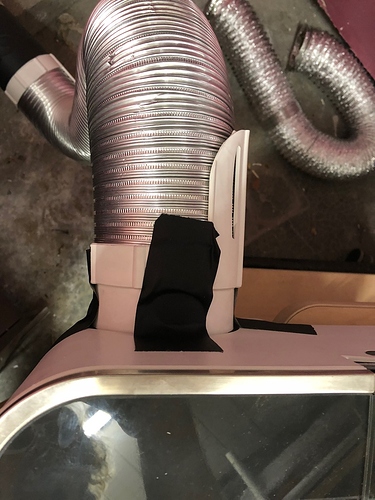 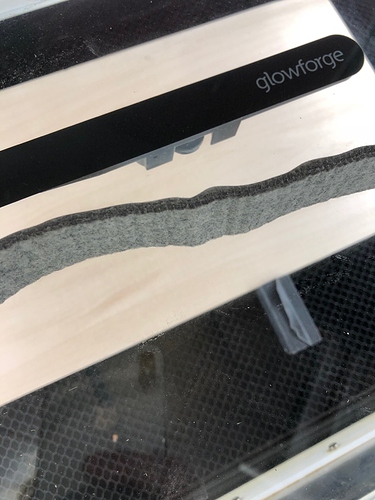 I think one reason we have trouble achieving an absolute seal with the flex duct is that spiral wire. It spirals underneath the duct material - all the way under the clamp. Where the wire gets pinched down to the duct, there is a pinhole space immediately each side of the wire where the duct material cannot contact the exhaust flange and seal… there is a spiral tunnel running under the clamp.
I think making a ‘bed’ for the wire to embed in out of a gasket material would be an improvement in the seal.

That flex duct you have there is far superior. Perhaps the full price lasers will sport premium ducting, but for what I paid - I’m good upgrading it.

I’m onto GF #2 right now. I noticed that both of them have a huge leak between the lid and the side on the left edge. So the fan blows the smoke to the left and much of it leaks out next to the lid. I fixed it by attaching some weatherproofing along the edge of the lid – really helped reduce fume leakage into the room.

That assuredly doesn’t help, but there are a slew of problems with said super bendy pipe!

First, in my install, it draped down to the floor and then back up to the outlet hole. This created 2 extra bends while making both the bend out the back of the GF and into the outlet port in the wall extra sharp!

And there are the leaks on both ends. As well, the material is super flimsy and repeated flexing appears to create pinholes!

The leak at the end of the spiral wire is easily taken care of by wrapping the entire joint with HVAC tape. Dryer vents are for dryers (including the other options out there) so when folks want to use them with lasers and produce poisonous gasses in high volumes, a $10 roll of tape made for sealing this stuff is a good investment.

The flexibility lends itself to moving the unit around the workspace as needed. I wheel mine all over the place because it is stowed away for storage when not in use, then brought out into the work area when needed.

The flange may be a wee bit short but honestly I don’t have any hard times with it. I use a screw type hose clamp and put the screw part at the bottom of the vent which frees up room to actually work with it.

Even with leak tape in place, I still had leaks with the included hose.

The flexibility was convenient, but I suspect you’ll find it has a bunch of micro holes after moving it all about for a while. Try sticking a light in it and turning off the room lights!

A screw type clamp would be an improvement over the included spring clamps, certainly.

I’ve had the GF 6 months now, taped joints, flexy hose and all. No leaks here.

Taped joints, et.al. and my garage smelled like a campfire. Now it doesn’t.

I’m super happy that the cheap as dirt Flexi-hose works for you.

It didn’t work for me. Nor did it work for a bunch of other people.

Hence, the solution that I posted.

I’m onto GF #2 right now. I noticed that both of them have a huge leak between the lid and the side on the left edge. So the fan blows the smoke to the left and much of it leaks out next to the lid. I fixed it by attaching some weatherproofing along the edge of the lid – really helped reduce fume leakage into the room.

I would question any smoke leaking out of the lid as when the exhaust is working correctly, an airtight seal is not necessary. During use air should be sucked in through lid cracks and not coming out of it. At least one other person and I had a similar serious exhaust issue and it ended up being a very dirty/clogged fans. I would suggest you check yours just in case. I’m glad you figured a work around, but it really sounds like yours isn’t working correctly.

but I suspect you’ll find it has a bunch of micro holes after moving it all about for a while. Try sticking a light in it and turning off the room lights!

I can’t find the post right now, but someone checked if the flex duct with the pinholes would actually leak water…it did not. The hose is a multilayer sandwich. The pinholes in the foil do not go through the plastic.

I did a similar thing to you - replaced the original duct with a similar semi-rigid ducting, installed a blast gate (because I live in MN…) and put a quick-connect end after the blast gate so I can disconnect from my vent port when not in use. (because frozen laser = bad!)

we made some quick cuts last night and it was -20 outside and I didn’t wait for the cool down cycle to complete, believe me the inside of the laser was already cool enough!

Anyway your points are all valid about the provided venting options being pretty meh, but to be honest they aren’t really permanent solutions (in my opinion) more like “I want to get started right now!” things. Anyone doing a permanent setup is going to want a more robust solution. some thumbscrew hose clamps, better ducting, and some HVAC metal tape all go a long long way. Now if only they provided an option to allow for longer exhaust fan runtimes…

Yes-- I think the longer exhaust fan runtimes and, better yet, if it could run at less than full whoosh speed, would go a long way to minimizing laser stench.

Ironically, I just took out that style of semi-rigid duct and replaced it with plastic. I thought maybe something was getting out between the seams. It didn’t make a difference.

I am actually considering buying a second inline fan to put at the end of the exhaust between the hose and my window vent. They are only like 30$ and I am hoping this will help reduce the smell.

Another detail: in my experience, most foil tape does not adhere well to plastic, long-term. A little bit of flexing and it lets go. I was struggling to find the end to un-tape mine from the Glowforge when I noticed I could just pull it off. I had the same experience on the other side, where it was connected to a plastic flange on the booster fan. It sticks for a few days and then pops loose.

Agreed. I will likely be using clamps and a gasket rather than trying to tape any of it together. Might as well just try to make it permanent the first time.

I should pop apart the connection to the GF and take a picture to share.

I found that 1/8" thick high temp gasket material with an adhesive back (some leftovers I had lying around from replacing the gasket on my BGE) stuck to the inside of the plastic at the end of that semi-rigid tube is a near perfect pressure fit on the back of the GF. In fact, without the semi-rigid tube, the plastic adaptor bit stuck on the GF quite nicely. The rigid tube made it too easy to pull off, which is why I added tape.

Note that this is about 15’ more gasket than you actually need.

Might as well just try to make it permanent the first time.

I think making a ‘bed’ for the wire to embed in out of a gasket material would be an improvement in the seal.

I’ve been using the silicone only-self-adhesive tape, and that seems to bed down nicely. Oh for the days of a handy helium leak detector

you’ll need to remove the hose at that end occasionally for cleaning.

Has anyone posted a video of cleaning the fan blades? I don’t recall seeing one.