I am working on some office space and I am planning on housing a table in the middle with 3D Printers and a glowforge pro. I want to know if it is feasible and usable to run a duct around 40ft (15 meters) long that go straight down to the floor under the slab from the GF output run underground to our nearest wall and then go to the roof… After transitioning to the roof it will make its way outside where it will be exhausted. My architect was concerned with the distance and the transitions and I wanted to know if this will work for venting.

This is the drawing. I hope I can explain my self. 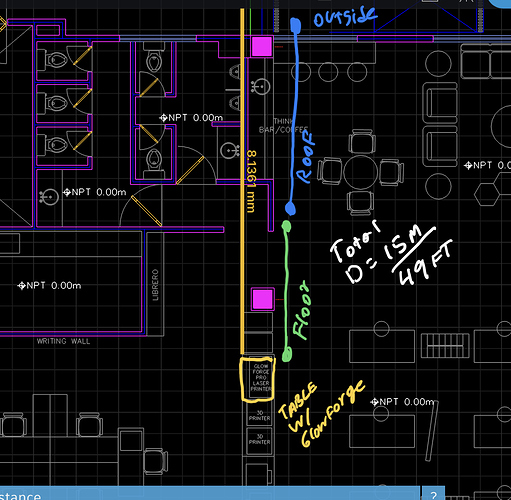 Any tips would be greatly appreciated!

From my experience. It doesn’t vent itself out very well. I would make sure you the proper calculations to keep your CFM over 300 for the exhaust all the way outside. I would also make sure you ventilate out that room and make up the air as fast as you can. I have my glow force in an office with a 500CFM fan venting the room and the glow-forge and I can easy smoke out my room.

I would suggest a full enclosure for the glowforge that moves both exhaust air as well as brings in make up air so that fumes do not enter into your work space. Thats my next project anyways.
just my .02

Tagging @karaelena as I know he has a long vent run. Or you could search for his posting.

From the look of it a roof exhaust with a roof assist, built into the wall would be the way to go with a horizontal 6" pipe that would allow some flexibility for the future. You already have several vertical vents through the bathrooms and some sort of room exhaust in the bathrooms a good idea as well. Adding another vent would not seem to be much of an issue but no matter what there would need to be some assistance.
I would also have this to keep dust and smells from the rooms.

Hey Danforth. How often do you replace your filters in the whale? I see that they sell carbon replacements also. Did you go with those or just the pre filter and the HEPA?

Pre-Release | From box to cut Made on a Glowforge

I guess I should mention what I have the glowforge sitting on. [image] Table top Legs (Qty 4) Storage system And two of these on the Glowforge on the left. One has sharpies, two metal rulers, carpenter pencils. The other has magnets, utility knife and microfiber cloth for the lid. As for the exhaust. I have two gravity type blast doors. One directly on the inlet (where the 'forge connects too) and the other is right after the booster. Directly behind that (the inlet for the 'for…

Venting Through Ceiling Beyond the Manual

Total length of my install is 28ft with one booster. For 40ft, I’d do two boosters and blast gates. One about 10~12ft downstream of the glowforge with a blast gate after it, and one about 5~10ft from the exit to the exterior with a blast gate before it. Both boosters about 200~250CFM. I’d suggest use 4" PVC between the long runs between boosters. Or the whole length if you can manage it (except the bit that interfaces the glowforge directly to the inlet, that should remain flex pipe.)

Then wire both boosters to a physical switch with a light. Or you can do something fancy by getting a dust collector switch/trigger that turns on a load when it detects a load.

How often do you replace your filters in the whale

I have not had to replace them after a year yet. If it had been taking the total smoke of the Glowforge it would probably need it though. We will probably get the ones made for it and I think getting one of those washable sponge type filters to catch the big chunks first

New construction, how cool!
From the ground up you can do it right. @karaelena has a good idea with the PVC, I used the standard 4" flue pipe for my long run to the furnace room next to the shop and then up and out the *roof.
Because everything downstream of the booster is pressurized I had to seal every seam and joint in the run (including the booster fan housing) with silicone to eliminate odor. With PVC the solid walls and glued joints will ensure a positive seal.
*Out the roof is the best possible configuration

the exhaust won’t bother your neighbors either!

Some of the most fun I ever had was setting my shop up from square one in my newly built home 20 years ago. Blank canvas, make it a masterpiece.

Thanks all for your help.

We are doing PVC. Let me show you the pictures of the layout. I was planning on a blast door on éxit. Now I will add one before going under the floor and one at the exit. Plus a booster where the pipe goes up. 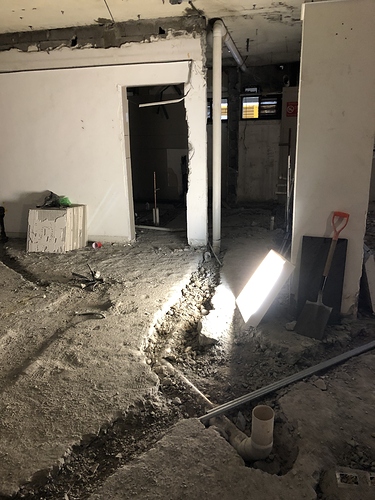 Most excellent. So cool to design the layout from the dirt up.

That’s 4" right?
I presume the glowforge is going to connect close to the upright terminal there? Just eyeballing it, I would think about the first booster in the vicinity of the elbow at the ceiling.

Now is the time if you want to incorporate any control leads to control the fans into that trench.

As far as the pipe it’s 4” and the unit will be right on top of the PVC. Planning the first blast door right before entering the PVC pipe. And then the other one on the exit… booster right on the ceiling Elbo… will plan for a 300CFM booster.

Your Glowforge is designed to operate with the included exhaust hose connected to the outside with a maximum of two 90 degree bends. If you configure your exhaust differently, the Glowforge unit may not be able to expel enough air, and it could cause smoke and fumes to enter the room. Because ventilation is complex and poor ventilation could cause smelly and even dangerous results, we can’t advise on exhaust configurations other than what’s described in the Glowforge Manual.