After reading a lot of topics on ventilation, particularly those of people getting a lot of smells, I wanted to share some thoughts on this from an engineering perspective and offer some suggestions based on the setup I upgraded to this weekend.

The glowforge itself, since it is upstream of the fan, is considered to be under negative pressure. Which means as long as the fan is clean and running as its supposed to, any gaps/leaks in the door or case only let air into the glowforge. It can’t blow out.

However, the vent hose being downstream of the fan means it is under positive pressure. Which means any gap, pin hole or leak point etc is a path for particulates and smoke to leak out. So take great care in making sure you seal well the hose at the glowforge and anywhere you have a seam along your exit path. If you are getting alot of smell or smoke, its very likely coming from somewhere in your vent hose path. I use aluminum foil tape which works very well.

The machine is so incredibly loud. And since GF seemingly can’t get their marketplace updated to let us order a compact filter separately, I decided it was time to change things up and not wait for it. So I got an 6" inline booster fan from Lowes (rated for up to 250cfm boosted flow) and connected it through a reducer to the glowforge with an insulated duct.

Since the rated CFM is >200cfm (which is what the compact filter fan is rated for) I am able to check the option in the UI as if I have a compact filter so that the booster is doing basically all of the venting and the loud internal fan slows way down. This new setup is so quiet, I can listen to the TV at normal levels even though the GF is sitting on the table right next to me. I could’t hear the TV really at all before. The smoke is visibly flowing out as usual and have not had any warnings for temperature or fans.

Anyways, wanted to share some info in case others are venting and want to make it quieter or are still fighting with smoke/smells from their machine. Hope this helps someone.

Can you post a link to the in-line fan?

Is your new booster inside your workspace or is it outside? I’m wondering about your noise reduction and whether its due to a larger diameter fan that runs at lower RPMs, or if it’s down to physical separation of having your fan outdoors.

Everything is inside the house. The larger booster running at lower RPM is super quiet. The major noise reduction comes from enabling the compact filter option slowing down the main internal glowforge fan. 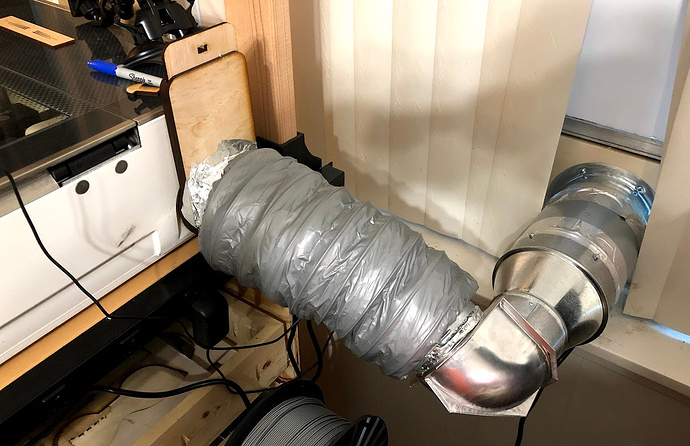 @WAM I forgot to mention that because of the way the fittings orientation worked out, this particular inline fan has a male side and female side. The 4" ones typically have a male on both ends to be inline with a hose on each end. So to connect it to the flanged adapter attached to the wall, I had to undo the two screws holding the fan inside the duct and flip it 180 degrees.

Just don’t forget to turn on the fan

Having worked quite a while with very marginal exhaust capability I found a number of interesting points. #1 the pressure gradients at all openings are not equal. If the exhaust volumes are sufficient this does not matter, but where the volume is marginal the total area open and what is happening with the smoke start to count a lot. When generating a lot of smoke, and the head fan is strong the smoke is blown against the front increasing the pressure there especially if the cut is near the front of the bed, If you are cutting through the material on a big piece of plywood, it will cut off almost all the escaping paths through the crumb tray grill leaving only the front opening and the cutting will create quite a positive pressure there as well. If you are using a Pro with the pass-through open a lot of smoke will escape there under the work in the best of conditions. So if you get smells using that condition look there for the source. A rag or whatever between the work and bottom of the opening can solve that issue if you encounter it.

I happened to have a roll of 1/2" foam tape 1/8" thick that is sticky on both sides but when run across the door and a bit of powder on the top kept that side from sticking. In total the tape compressed to the same thickness as the gap and shut off that much area of exposure where the head fan was blowing the smoke against it.

Not wanting to size down from 6" I bought a Vivosun 4" assist that cannot do the job alone but with the replaced machine makes the amount of smoke actually resident at any one time looking to be less than half what it was and so the build up of gunk seems to be quite considerably less.

Of much less knowledge apparently is that a V8 bottle is the perfect diameter for your 4" exhaust, Cut off the vertical part and there are several ribs keeping the bottle round when you grab the bottle, Those ribs are the perfect size to grab a hold of the Glowforge exhaust flange very tightly without leakage. this gives a tight fit and a clear space that you can see the exhaust fan effects even while it is running. 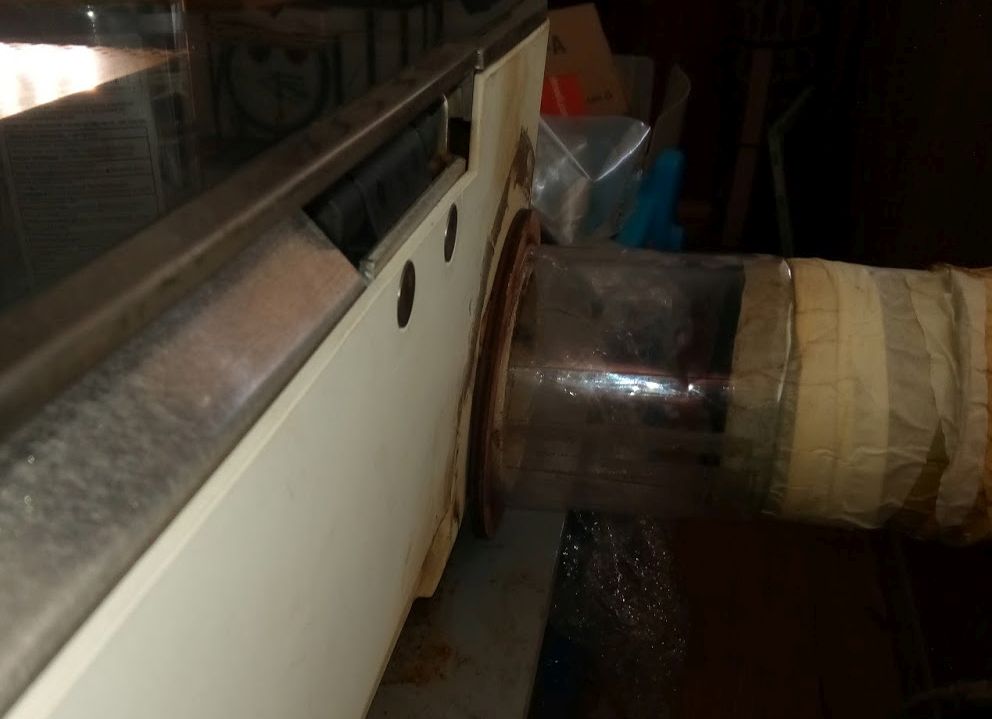 I think that the positioning of the machine gives use of the pass-through without having to move it.

@MechanicalGoose, once I got serious about sealing the pressurized sections of the exhaust run I have enjoyed zero odor from vaporizing stuff.

I don’t think it’s a marketplace problem, my impression is that it’s more of a production volume issue.

Refering to Dan’s previous note below.

The Glowforge Compact Filter Everything Else

An update: all customers who ordered a Glowforge Air Filter and requested a Compact Filter instead have now been shipped (with a few more going out this week). We’re now switching production to build units for sale with new machines (available for sale at glowforge.com/order). Now that we’ve completed all active requests, if you have a Glowforge Air Filter, you can still request a switch to a Compact Filter and we’ll add it to the production queue as well; delivery times will vary based on ava…

From the research I did, I think Poriair is who makes the Compact filter and it’s very similar to their Apollo W180. Same handles, wheels, form factor and similar filter element. It’s a little lower flow than the upgraded Glowforge version but it’s also half the cost. Amazon has it for $475.

Besides the flange and overall unit dimensions?