I built a panel for my window and a properly sealed air venting path according to spec (only two bends, length within recommended tolerances). Then I spent about an hour cutting thick-ish black acrylic.

At first, it seemed the system was working fine. Could barely smell the acrylic. Then the cut was done, I waited until the fan stopped running, opened the Glowforge, and there was a lot more smell. By the time I’d cut for an hour (and opened another window far from the venting, to let in fresh air), both I and some other people in our workspace started feeling a bit woozy, and someone who walked in commented they could smell it all down the hall.

Clearly, something’s wrong. It’s fall here and getting cold, and the vent goes upwards, so I was wondering if what’s happening is there’s some atmospheric pressure pushing the air back down the vent as soon as the fan stops running. At least when you light a fire in a fireplace here during this season you have to heat the air first to push out an “air lock” so the smoke doesn’t come into the room instead of going out the chimney. Perhaps an extra fan in the pipe that would keep running even after the cut is done would fix this? Or could one somehow set the Glowforge fan to keep running for a bit after the job is done?

The other thing I was wondering is this: I have the Air Filter on order. How good is it going to be? Can I trust it to work in a workshop full of people without letting these fumes through?

Make sure the air intakes underneath the Glowforge are clear and open for a good flow through. Double check every length of the hose, especially at connections. Many folks have switched to a different hose that is a bit more substantial because the supplied hose can be somewhat fragile. Make sure the exit part of the hose does not block the flow.

In my experience, when I smell the exhaust, there is some type of leak or back flow. I have a very short run that’s almost straight. I’ve had no problem with long acrylic jobs or leather even and my setup handles it.

The following post is masterful in examining the issue, if you haven’t seen it.

Let’s talk about fans Beyond the Manual

I found a lot of mentions of fans, theoretical or currently being used, in various threads, but I still have a lot of questions and I think a consolidated topic on it would be helpful. I’m only on day 2, but the smell is becoming a problem. I’ve gone over everything with foil tape, but my lungs still smell like hurty. It’s a short run and there are only two bends in it, and I’m going to try semi-rigid duct and flexible foil tape to ensure I get every possible hole and crack covered. But still, …

I hate cutting acrylic for this reason. There will be residual stench from the cut pieces. So, when you open the GF and pull out the cut bits and the scrap bits? All of them will be stinky. For quite a while.

And it’ll be super doubleplus stinky outside wherever you’re venting to. If there are is any kind of air intake – passive or active – that stench is gonna come back in.

I have no idea whether or not the air filter is going to fully solve the problem. I suspect not because once the fans are off, there is residual stink floating about. Certainly, full on air filter will help, assuming it works well!

I’m seriously tempted to run a vertical pipe up outside with an inline booster and vent a few feet above my roof line.

Add an inline vent booster -
something like this,
https://www.amazon.com/iPower-Booster-Inline-Exhaust-Grounded/dp/B00CQBFOTS/ref=sr_1_2?ie=UTF8&qid=1539045152&sr=8-2&keywords=4"+inline+vent+booster

Or like this if the distance is longer…
https://amzn.to/2C4fzBo

Turn it on before you hit the button (a switched power strip would work…) and wait 3-5 minutes after the GF fans turn off.

Fyi - I bought one similar to the “lazy moon” one above and it leaked a ton through various cracks adn crevisis of the housing. Had to essentially wrap the thing in duct tape. I would consider another model fan.

My vent run exits through the roof, twenty feet up. I bought a pretty nice quality 400cfm inline fan from the grower supply house down the street, and it works a mint… after I wrapped every single seam and fastener point in aluminum tape.

Personally, I wouldn’t go below 200 cmf, since that’s what the GF fan is supposedly rated at, and I wouldn’t want to risk causing more of a blockage by putting in a fan thats not moving enough air. YMMV.

If going vertical, it takes A LOT more than you’d think to push that exhaust up & out, and more than the little fan in the GF unit can push (as you’ve unfortunately learned). So the suggestions for an-line blower are your best bet.

(there are sites/books with details on what type of blowers are needed for vent sizes–or max run a vent can be either horizontal or vertical for equipment, which if you can’t do that = in-line blower fan).

I still have mine venting out a window & crap covering the “open” part of the screen. Definitely not a good option now it’s getting cold & wet again!

Bear in mind unless you have a booster fan sucking, everything downstream of the exhaust fan of the glowforge is pressurized, so absolute air-tight sealing is needed. I trusted silicone sealant for that on every joint of the 4" flue pipe I used for my extended exhaust run. Caulk would work as well.
I also replaced the squeeze clamp that came with the duct with a screw clamp I could cinch down.
There is zero smell.
I am fortunate enough to have an unused furnace flue at my disposal, so with a 190CFM booster at the vertical run, mine goes out the roof too.

thanks for the quick and helpful replies, guys!

My GF uses a typical dryer vent attached to the hose that shipped with the unit. I tried a 100 cfm inline fan and liked the way it vented the residual odors after the GF shutsdown. I believe most of my odors come from the GF hours after the job is finished.

I have very little understanding of HVAC but it seemed after reading the Glowforge’s specs that a 100 cfm fan would act as an impediment to the machine’s venting system while in operation. The GF’s vent fan pushes more than 100 cfm.

If someone has the real answer to this problem my basement would smell better with secondary fan inline.

I was going to post on my own but @Bigjohn beat me to it! I have the Booster Fan Inline Duct Vent Blower he showed, and it does the trick. Turn it on before you start cutting anything, leave it on until your ready to finally shut the lights out and go to bed. It’ll continuously clear fresh air through the forge. Can’t recommend enough.
Good luck!

@aspiala I’m glad you contacted us about this.

Even with proper filtration, small amounts of smoke and fumes can enter the air around your Glowforge, producing a detectable odor. You may also smell an odor when you open the Glowforge lid, even long after a print is complete. This is not harmful.

However, if you detect a strong, sharp smell that also causes eyes, nose, or throat irritation, or if there is visible smoke escaping while the lid is closed, shut off your Glowforge unit immediately. Smoke and fumes could be entering the room in excessive concentrations.

We’ve created an troubleshooting guide with illustrations here: https://glowforge.com/support/topic/troubleshooting/print#excessive-smoke-or-fumes-during-print. If you haven’t already, please review it and try the troubleshooting listed there.

If you’re still seeing or smelling excessive smoke or fumes when using Proofgrade materials, we’re here for you. Email us again and send us:

We do have customers using boosters and longer ventilation runs, but unfortunately we can’t advise on the design or construction of such systems, other than to say airflow is roughly 150 cfm. We recommend ventilating your Glowforge as described in the user manual. If you take a different approach, I’m afraid we can’t provide support for that. We do have an amazing community that may be able to offer advice or suggestions, though - you can ask in our “Beyond the Manual” section of the forum at Beyond the Manual - Glowforge Owners Forum. Please note, information posted in that section of the forum is not reviewed or endorsed by Glowforge staff.

If someone has the real answer to this problem my basement would smell better with secondary fan inline.

We try to keep to one topic per post in the Problems and Support section. Can you create a new post with this question?

The inline booster should not cause back-pressure - it’s not a ‘seal’ or anything - the blades are bent to allow airflow and they don’t touch the edge of the metal sleeve. The benefit of the booster has been stated - it runs and runs, constantly pulling air through the forge and out the vent, minimizing the remnant odor, probably pulling the entire ‘air volume’ of the forge out every second…

Had to essentially wrap the thing in duct tape

Thank you for noting the problem of leaks at the fan. I bought a 200 cfm in line fan
so I can put off sending Puff home for a flatulence adjustment for a few months as the trip itself will be a major pain whenever, but it is a bad time of the year to vacation.

I did buy some of that spray anti-leak they advertise on tv thinking I had bought clear instead of shiny white, so I am thinking it will work better than duck tape and look better while doing it.

I have had fewer issues with dragon flatulence than I would have since I bought Puff a companion that feeds on any sort of flatulence. Not a part of the original expectation of direct mouth to tail action it still feeds like a blue whale leaving little for anyone else.

I sealed my booster housing with silicone too because of leaks where the housing is assembled, that includes the electrical connection box on the side.
Having air purging the machine constantly is a definite improvement.

Another good option for sealing is aluminum tape. Duct tape doesn’t do as good a job IMHO.

I have decided I prefer black over shiny white so I used a bit of Gorilla tape to seal the outflow… I have not tested it yet but it is hard to tell the blower is operating at all it is so quiet. 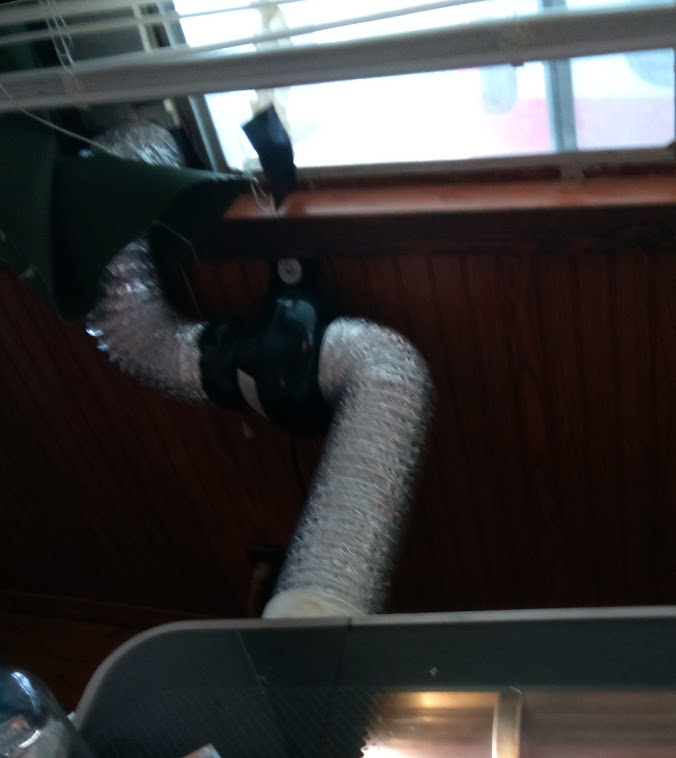 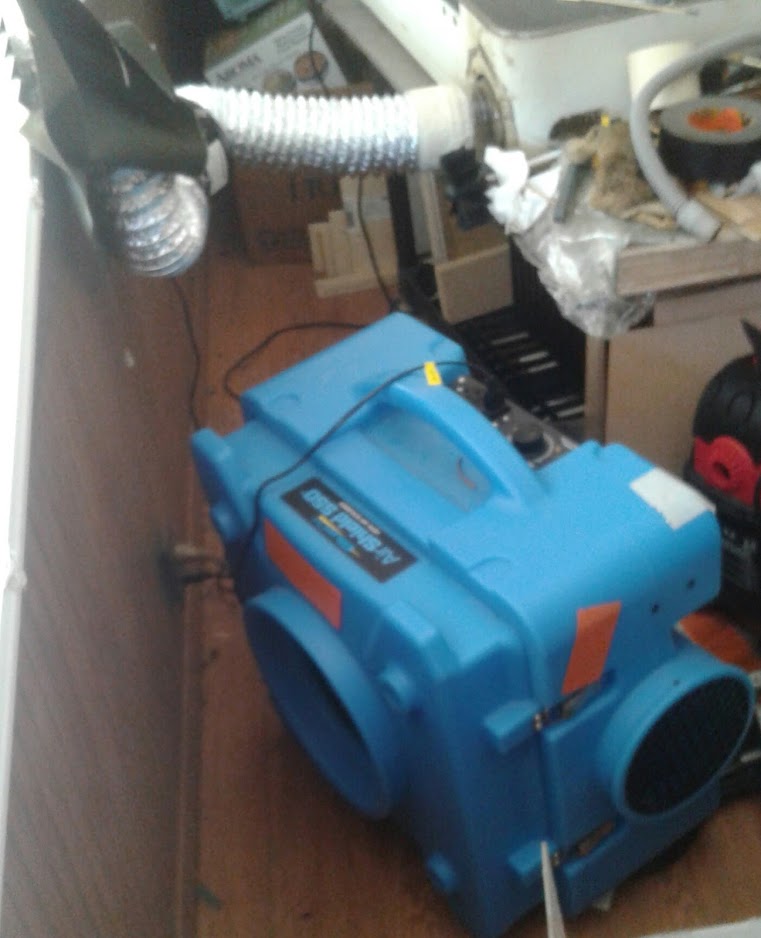 I have now tested it and while the results are marginal they exist and the blue whale is eating the residuals.