My sewing room has a space for my Glowforge and there’s a window right behind it. Excellent, right? Maybe not so much. My first thought was that I could just open the window when I need to vent. However, it only opens on the bottom half like the one pictured below. The window in my sewing room has a table in front of it with lots of storage underneath. That makes it very challenging to get the window open. My next thought was to create an insert in the bottom of the window like some others have. However, it’s in the front of the house so I’m concerned about security, appearance, and keeping the appropriate temperature air in. My last thought was to vent through the ceiling a/c vent, into the attic and out a vent I can install in the eaves. I’d have to detach the a/c ducting to that particular vent and perhaps add an additional exhaust fan in the ceiling to account for the extra distance. Anyone think this will work? I think it would be no more than 12’ to get it to the eaves (6’ vertical and 6’horizontal). 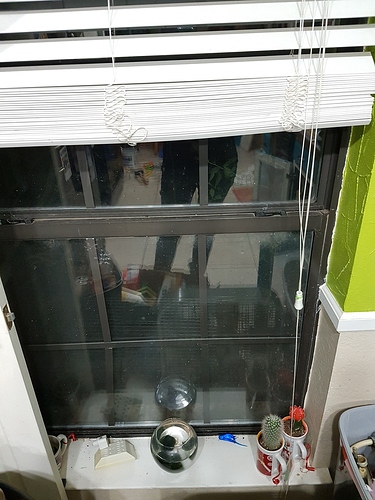 I vent my 2 laser exhausts through the ceiling at my office…it goes 12 ft above the drop ceiling (which is 8 ft) up to the roof. ( total of 20 ft). I have a large exhaust fan enclosed in a box with vents sitting on the roof that pulls the exhaust up and out.
You will need a fan to help the exhaust along and make sure it vents out and not into the crawl space. I have a blast door slider on the hose so cold air doesnt filter down to the lasers in the winter too.

you absolutely can’t vent through an a/c vent unless it’s unused and disconnected from the rest of the house. if your laser exhaust were leaking, you really wouldn’t want to spread it across the house; it’s also against code.

it’s too bad you don’t feel comfortable using the window, as that would be ideal. as @smcgathyfay mentioned, though, exhausting through the ceiling isn’t too hard, just a lot of work. i think your plan sounds fine as long as you cut your own hole in the ceiling for ductwork.

something to keep in mind - smooth ducting will impede airflow less than that collapsible ribbed kind. if you need to install a booster fan for it (probably, but glowforge can tell you how long of a run their exhaust fan supports), you’ll want to install it at the very end, so that it minimizes leaks in your exhaust path. 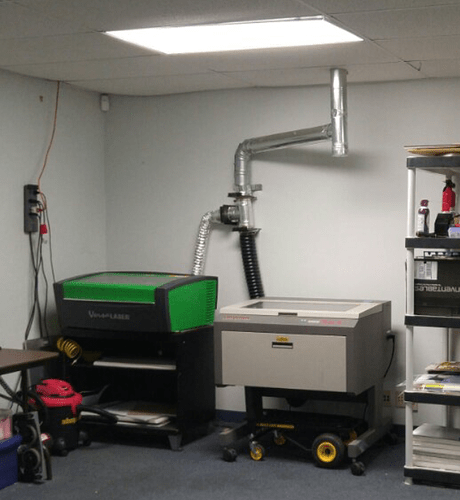 I agree about kerb appeal and security for a front window. It is a simple solution and you can make the window connection airtight and insulated like I did with the two layers of foam board but it doesn’t look nice nfrom outside and making it at least as secure as a window would take work.

In the long run (ha pun!) it would be worth your effort to setup a permanent exhaust through the ceiling and out the roof or eaves. Then you will not have to worry about it and can concentrate on lasering. Any HVAC friends than can assist in the calculations and air assist?. @karaelena’s solution seem similar to what you want to do in terms of some exhaust assist and a longer run.

Unless there’s a really good reason not to cut another hole in the ceiling, it might be best to leave the existing AC stuff alone entirely. Adapting size and shape will cost you time, noise and airflow. And it’s easy enough to cover 5-10 years from now.

Maybe this is silly, but what about taking a photo of the window as it is now, and designing an insert that matches up, with mirrored acrylic ‘window panes’ and a layer of stiff insulation… still might not give you the security you are looking for but could look good enough to have facing the street?

was literally just now thinking the same thing! i think this is a great idea. the only really noticeable bit would be the dryer flaps you put on the outside hole.

Yeah me too a nice screen to camouflage the vent on the window.

I agree about kerb appeal and security for a front window. It is a simple solution and you can make the window connection airtight and insulated like I did with the two layers of foam board but it doesn’t look nice nfrom outside and making it at least as secure as a window would take work.

Thank you for not making me seem crazy. I know a window insert is most common, and will definitely be easier than going through the ceiling, but I don’t want to invite a thief or make a mess of ash and other small debris in my front yard along with the look of a funky window.

something to keep in mind - smooth ducting will impede airflow less than that collapsible ribbed kind. if you need to install a booster fan for it (probably, but glowforge can tell you how long of a run their exhaust fan supports), you’ll want to install it at the very end, so that it minimizes leaks in your exhaust path.

Thanks, I’ll keep this in mind.

Has anyone seen or considered these [inline fans with air filter?
Perhaps it could be placed in the attic without the need for an outtake in the eaves?
I could place it near the existing ridge vent.
(http://www.homedepot.com/p/Viagrow-Carbon-Air-Filter-1-with-Inline-Fan-Combo-22-45-CFM-Exhaust-VOCC4/203548980)? 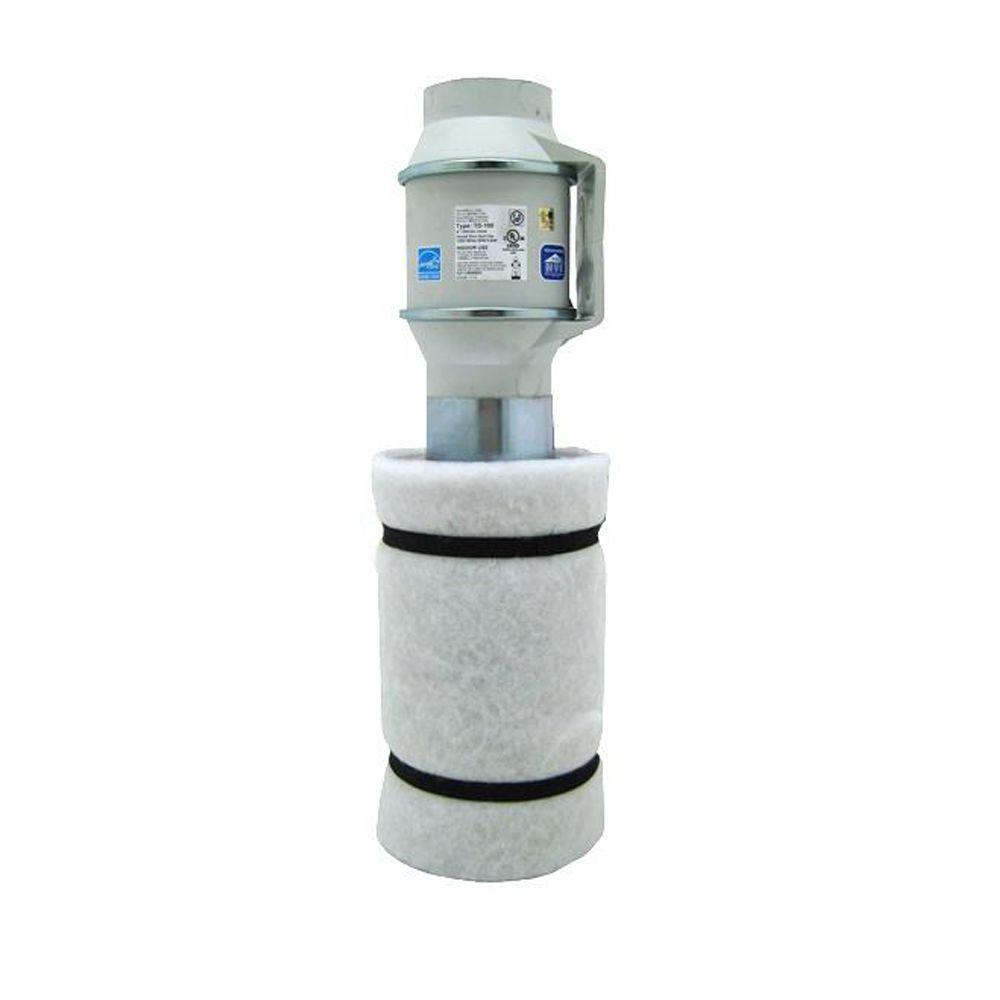 Please forgive my slow response to all your help. I spent the last two days installing a new tile backsplash in my kitchen to go with my new countertops. I’m exhausted, but I think it came out pretty great. 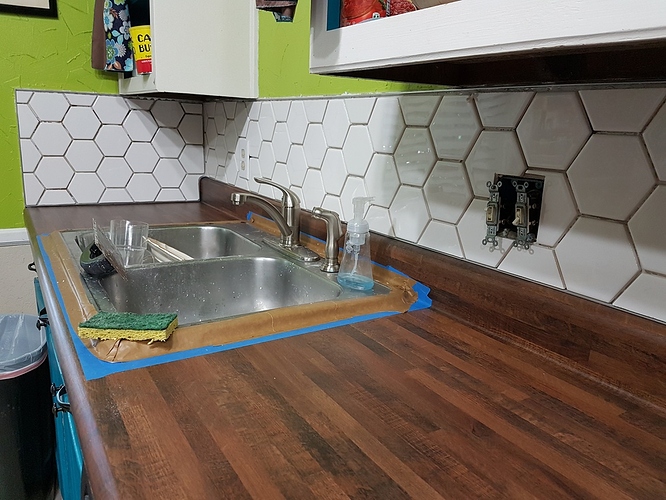 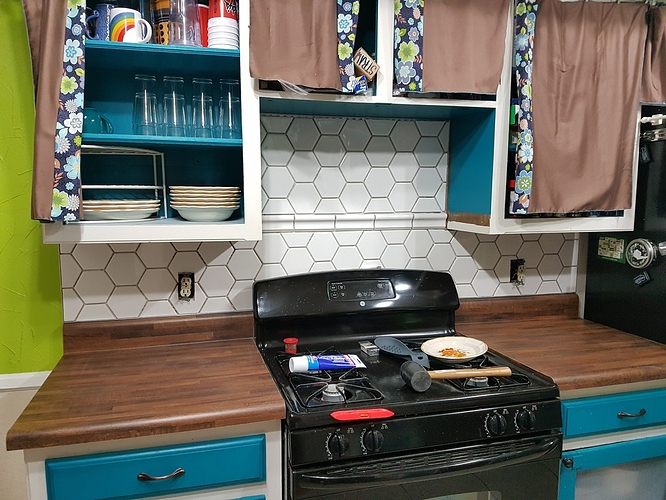 Has anyone seen or considered these [inline fans with air filter?
Perhaps it could be placed in the attic without the need for an outtake in the eaves?
I could place it near the existing ridge vent.

Unless that filtration is for laser cutting, it would be dangerous to vent those fumes into the attic space (consider those nasty things like CO leaking back into your house).

You won’t notice it (I’ve cut a lot of stuff so far on my GF PRU and there is no mark on the deck where it exhausts) let alone ash or debris.

unfortunately that filter won’t be sufficient. it’s a carbon filter designed mostly to filter out the odors from cannabis grow rooms. it won’t capture toxic gases or particulate matter, for example.

speaking of, there’s a fair amount of junk that gets exhausted, which is why laser filters need changing much more often than most others. something else to consider when venting into an enclosed attic space - water is a byproduct of the combustion reaction; while the laser tends to ablate most things away without necessarily burning them, the exhaust may be wet enough to cause some condensation on a really long job (short jobs would likely not matter, @dan could probably find out how humid the exhaust tends to be).

Now you need to make some leather (or wood) bee accents for that honeycomb.

Actually a friend of mine wanted me to make vinyl bug stickers so it would look like a game of Hive, but I don’t really want my kitchen to look like a board game. 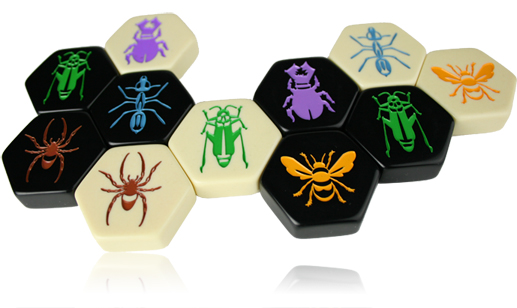 Personally I would go the roof vent path. Duct it completely to the outside and place your inline fan as close to the exit as possible as @jrnelson said. That way the entire run is under suction instead of pressurized. Zero leaks in the run.

Took me 2days to run mine out the roof so odor will never be a concern. I am so glad I did it well, instead of the eaiser way of dumping the exhaust out the shop window between our houses.

There is also a benefit to the booster, in that it will continue to pull air through the unit after the glowforge fans have stopped.
I second @smcgathyfay’s blast gate idea for winter temperatures when the machine is not running.

How did you deal with power? All the inline exhaust fans I’m seeing have standard plugs. If it’s in the attic, I’ll need to add a box and patch into the wires currently in the ceiling. I could cut the plug off and splice it in, but perhaps you did something else?

My situation is kind of unique, and my solution was a bit easier than yours will be.
We upgraded the furnace to 98% efficient which vents through the wall with PVC, so the metal duct to the roof was abandoned, but still vents the water heater. I ran about 15 feet of duct from the laser in the next room to that duct that was shared between the old furnace and water heater. My booster sits above the junction of the water heater and the duct from the shop.
The new furnace has a dedicated circuit with a duplex outlet available, so I plugged the fan into that and soldered a speed controller into the fan. I run it full speed when operating the laser, and crank it down otherwise - so it runs all the time.
There is still the venting required by the old furnace for combustion air, so there is a good air turn over in there.

Your situation will be a bit more complicated. Running a conduit for a remote switch to be within reach will be required.
If it was me, I would run the conduit right along the ductwork. If the vent run has to pass through multiple walls, I might consider running the conduit through the duct.
I believe there are automatic sensing systems that would trigger the fan, but I am not familiar with them, and they would still require a circuit to be available to the fan.

Yep, a PITA but that pain will pass quickly. I am really glad objectionable odors are not a pain for me and my neighbors.

Sorry for the shameless show and tell.

Show and Tell Everything Else

##Editor’s note: This thread is for non-Glowforge crafts. For Glowforge projects, look in the Made on a Glowforge category. ’Cmon… lets see some of your crafts people! I know there are many skilled artisans here - Whatcha got? I’ll throw in an entry. No lased goodies to show, but I have the results of excursions down various rabbit holes. Many different creative endeavors. This is the largest bronze casting I ever did, inspired by my love of SCUBA, and my affinity for a particular creature. …

if you want to be even lazier, you could buy one of those current-sensing plugs like they use for power tools. tool turns on, so does vacuum.

“turning on a switch? how very pedestrian.” – @smcgathyfay in a few weeks