I’m also stuck on calibrating for over an hour now. Every time I try to print, it starts to print then just says “sorry, couldn’t print”.

Was trying to cut out christmas ornaments for tonight.

Trying again now. Had to run a few errands. Processing design…definitely approaching the 5 min mark on the design processing…

Had to reload everything. After doing so, got to the rendering your design step, which is taking a bit of time as well, guessing more than normal. 6.5 min to render simple design. Scanning your material, less than 1 min. Preparing your design step 7 min… still waiting…8 min…9 min…10 min… 11 min…13 min…15 min…16 min… Going to have to leave the computer working, so will loose total time at this point. 18 min of preparing when I had to step away.

Wow, I thought an hour was a long time to wait. I would let the design render overnight and print in the morning. 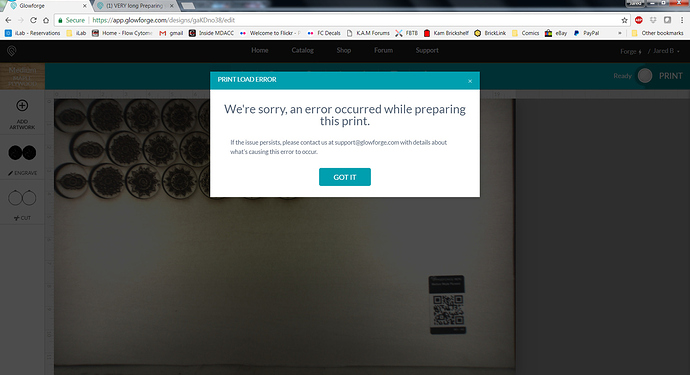 I’m still having the problem. It gets past the processing message and when it goes to the glowforge UI window I can see the cut list on the side but I cannot position anything on the material… there is no box for it. I’ve zoomed out as far as possible and still nothing.

This is what I see for an extended period of time: 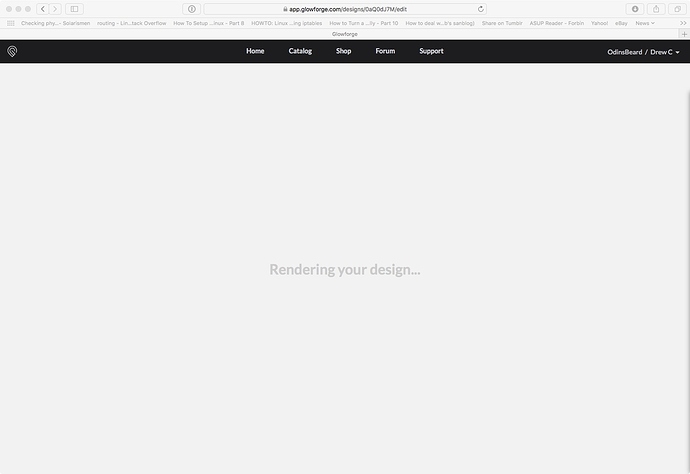 if it ever gets past this again I will show a screen show of the next issue.

Another Error-ed out, at least it took less time to do so.

Finally got another print started, but again, I had to remove items from the printing. I am merely creating a 3" Christmas ornament with text on it that has been converted to graphics. Nothing complex, only 16 min of “printing” time but having a heck of a time to get it to the printing stage. 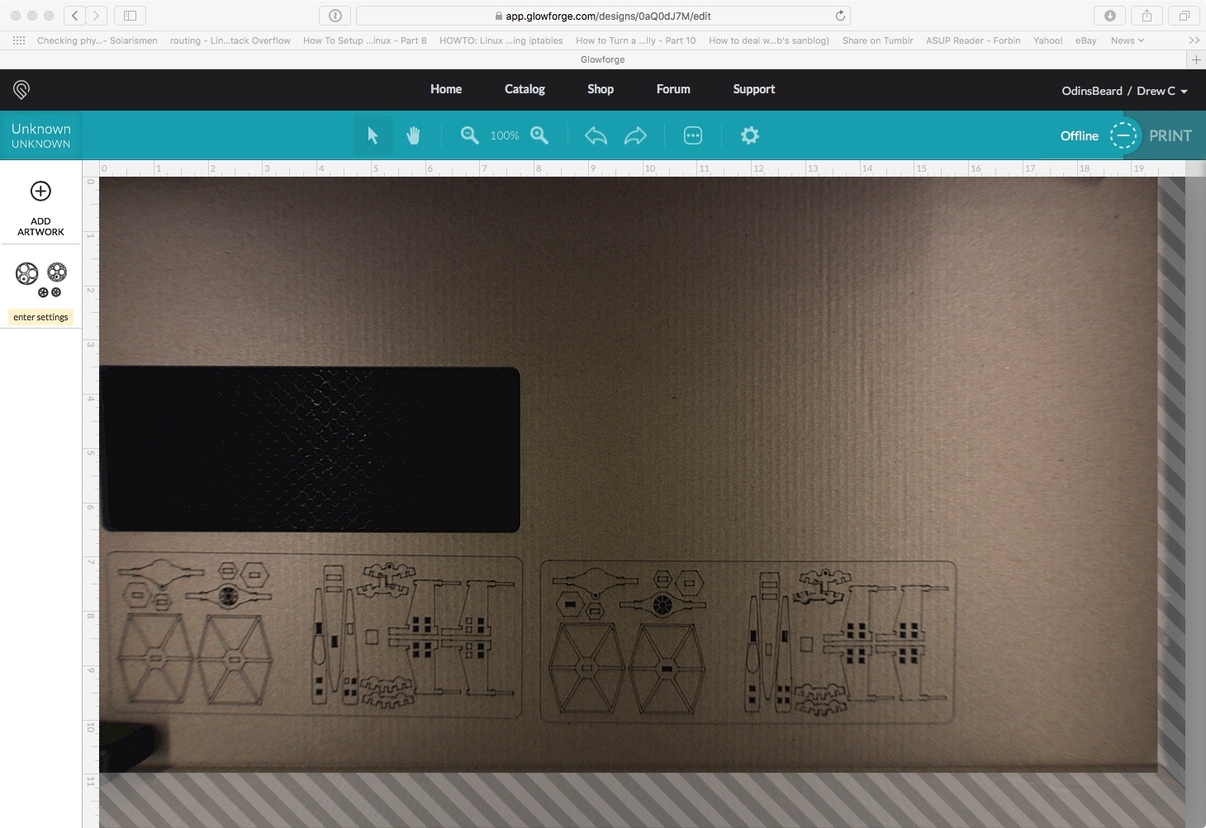 As you can see… no magenta location box for the items.

I tried this with a 3"x4" business card style gear thingy with the same result.

They don’t turn magenta until you enter settings unless you have detected Proofgrade in which case it chooses settings automatically.

how about there’s no box at all regardless of color?

I would love to tell you what color the box actually is but since the app hasn’t worked all day it’s hard to recall from memory.

In that screenshot there is absolutely no way to place the cut object on the material. 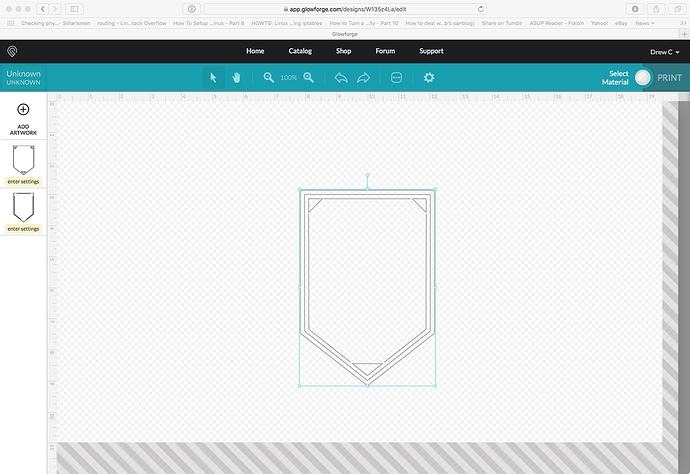 If I open a project that the app has seen before it works just fine. If I do anything custom… not so much

Perhaps the object is positioned off of the screen or has a scaling issue. I could try on my device if you like. If you’ve got an example svg that doesn’t work that you can share, attach it in a zip.

I think you need to add a material thickness first.

nope… you can add if the unit isn’t online at all… if you look at the picture where the plaque shows up the glowforge isn’t even turned on.

I’ve tried it with multiple different things today, not just the one above. If it’s positioned off the screen that is 110% a UI problem… it should default landing on the page. Considering I’ve tried it with 2" and 4" gears and it doesn’t show up… I doubt it’s a scaling issue either.

You can try this attachment. I’ve put it into inkscape and exported to SVG like I have other stuff… I’ve not had a problem with stuff like this until today. Planetary_gear_calling_card.zip (1.5 MB)

No doubt, but I think you’ll agree that this is the kind of polish that the app currently lacks in a few places at the moment.

Yes, the dxf coordinates if you just open them up in Inkscape and save as svg they’re waaay off the bottom. The app doesn’t move stuff by design since some folks use the art board for accurate placement (since the camera view isn’t).

The svg also requires some editing before printing since dxf import brings in all the construction lines as cut lines. I could make a run at it, but I’m not sure which lines to nuke.

I find a workflow that works for me better with dxf’s is to use my 12x20 template in inkscape (with cut and engrave limit guidelines) by fine new and then "import"ing the dxf. and then placing it.

I’ll take a look at the pdf next.