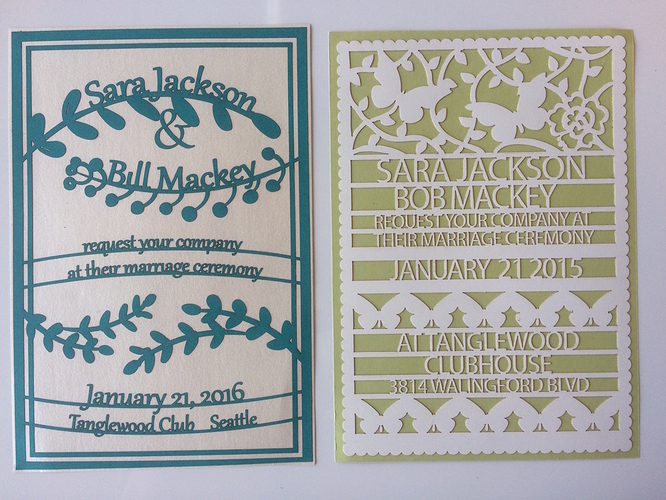 I’m wondering how many sheets of paper can be cut at once? Say If I was to want to do 100 invites , could I have stacks of 10 sheets or would each piece need to be cut on its own?

That’s a good question - it would require some experimentation. I’m guessing you’d want each one separate, but it’d be worth trying.

You might get smoke / residue creeping between the layers when cutting a stack, especially with air assist blowing out of the nozzle.

I was wondering if there’s any kind of fonts who will attach the letters so it’s possible to make invitations like this or if you just have to make it yourself?

Lots - google “stencil fonts”. I’ve also manually adapted fonts to work for this; using pathfinder in Illustrator, I didn’t find it to be too challenging.

I would expect the number of units that can be stacked for simultaneous cuts would be limited the focal depth.
The focus diverges pretty quickly with depth.

I see that Sara Jackson’s January 2015 marriage to Bob Mackey didn’t even last a year before she married Bob’s brother Bill in January of this year. She’s going to singlehandedly keep the laser-cut invitation industry in business!

On a more serious note, what’s the cut time on pieces like this? I would expect paper to be pretty quick.

Ha! Know what happened to Bill? The “ILL” didn’t look as good in the all-caps-with-lines-on-top-and-below treatment.

I don’t remember cut time, but it was reasonably quick.

Question: will there be a way to line up the paper to make additional copies and have them be consistent from one invite to the next? For example, I often print on an invitation and then want to cut (with a Cricut) around some of the text. One of the limitations I experience with this is, that I can’t specify the exact place to cut on the paper in the preview. Will the Glowforge offer a method to line up the invitation to ensure a cut that is aligned every time for each piece I need to cut? Thanks!

There has been a lot of discussion and speculation on this point. There is an expectation by the members of the forum it will do this; the how is endlessly speculated. If you search registration mark you should find some threads from the paperwork/printing side. There are others. But if it isn’t in the FAQ on the main website it is not guaranteed.

Thanks caribis2 I appreciate you taking the time to address my question! I’ll search “registration” as you suggested.
I haven’t dedicated nearly enough time to researching all that the GF will do. I was enraptured very quickly by the promo video and was on the fence about getting one… because of cash flow. I did take the plunge during the initial introductory offer, but I really haven’t had much time to play in the forum.

I was wondering if the laser will char the edges of the paper like it does the
Wood when it cuts?

Technically, yes, but with careful control of the settings and selection of the material, it’s not noticeable.

I would really like to know the answer to this as well. My business is making cards and it would be so helpful to know if we could cut several layers of cardstock at once, as long as it was under 1.5 inches? I also would like to make wood veneer cards and wondering if we could also cut more than one at a time? It would make a huge difference in productivity. Can you tell us how long it took to cut your sample cards? Also, will the laser score veneer? If the veneer can be scored, than it can be bent and folded and create more options.

One of the forum regulars actually did a blog post about this. Granted, it wasn’t with a Glowforge, but I imagine the issues would be similar across most lasers. 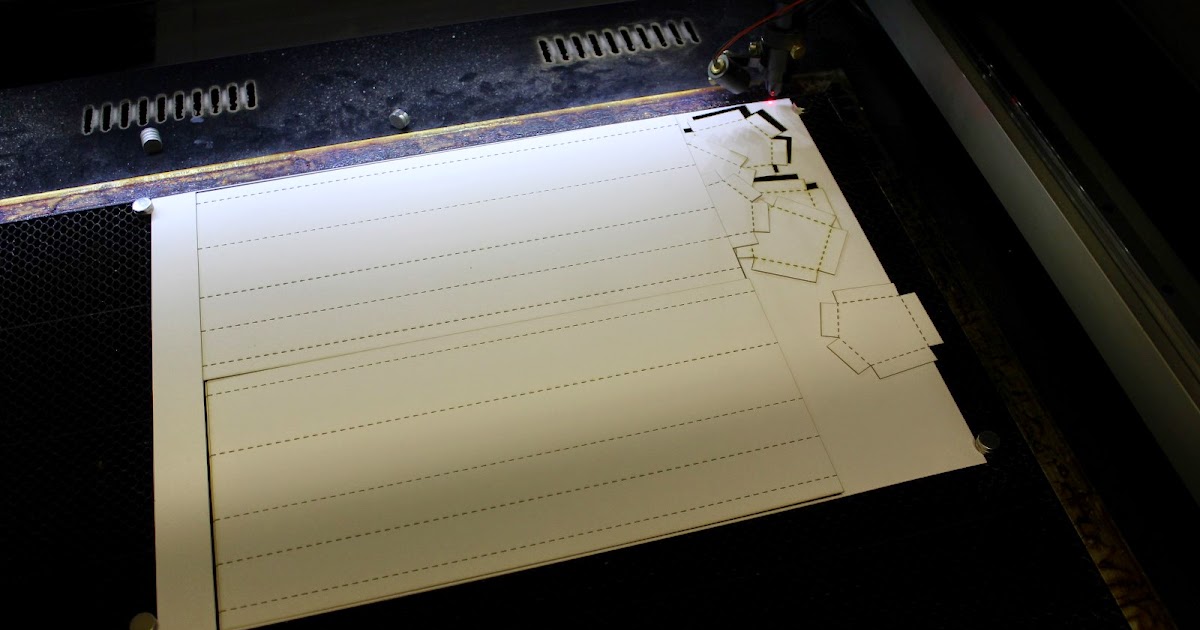 While trying to build the skin for the inside of my hopper  I needed to cut a lot of paper to the right size. I perforated the sheets t...

I was told by a laser user (not GF) that if different materials are cut with a laser, paper is more likely to show char edges or possibly unable to cut paper because it may result damaged or dirty due to previous used materials. If this si correct, Is there the possibility to buy an additional honeycomb tray?

I think the main problem with trying to cut stacks of paper is that it would be nearly impossible press them so tight where there would be no air between the sheets. As long as you have pockets of air you are going to have smoke damage. The tighter you can stack them, the less smoke damage you will get. Basically that’s how masking your cut on wood works. You are keeping air from the surface of the wood, therefore, no smoke staining.

I think the main problem with trying to cut stacks of paper is that it would be nearly impossible press them so tight where there would be no air between the sheets.

Correct. Single sheets like for cards or if you’re using the laser to score the paper for folding work well.

You’ll want to invest in some thin rare earth (neodymium) magnets so you can hold the paper down to the bed otherwise the paper may move because of the air movement caused by the head or air assist blowing. Amazon has them and they’re not too expensive. The neodymium ones are better than standard ceramic ones (typically black discs or squares) because they’re chrome coated so they don’t mark the material you’re holding to the bed.

They can be more fragile if you drop them or let them slam into each other they’ll crack or break. But they’re super strong for their size so they’re also good for holding down ply that may be bowed a bit too.

I was told by a laser user (not GF) that if different materials are cut with a laser, paper is more likely to show char edges due to a dirty/burned honeycomb base because other materials cut previously. If this si correct, Is there a possibility to buy an additional honeycomb tray?