I am posting this in BTM since I realize there is not official support for anodized AL, but this is a weird effect. OK, this will likely require a @dan explanation. As I posted earlier we just got two new baby goats and so like our other 2 goats they needed name tags. I usually use the anodized tags from Johnson Plastics, so I did my usual thing to engrave, but for some reason my older settings in the GFUI were gone, so I sort of guessed that they used to be. What I have discovered is some weird effect, that I am sure @dan can explain, which is when I overpower the engrave (in this case 500/60) you only get the outline of the letters: 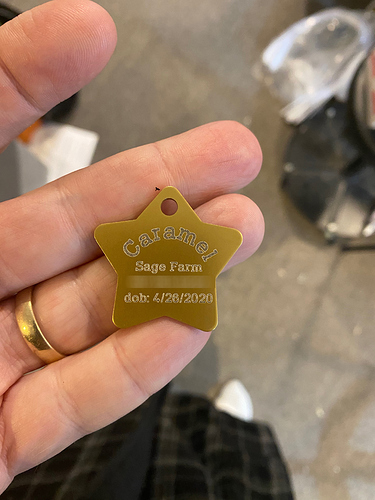 While when I do it with the lower power setting (35 - what I previously had used): 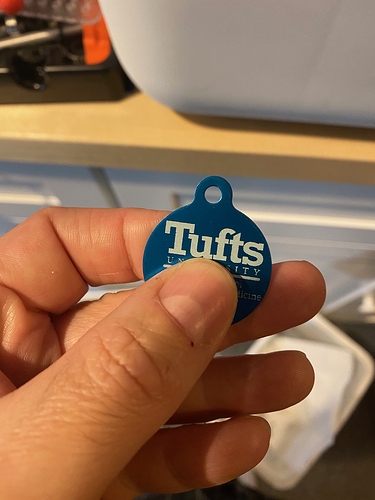 Looks to me like it was engraved but it went black where the laser had a chance to really hit it. The edges are always going to get less laser energy than a spot in the middle of the pass. I’d say it’s about the way this particular tag is anodized and or coated.

Did you try taking a solvent to it? Might clean up and be salvageable.

I feel like I illustrated this concept once but I doubt I’ll be able to find it.

This is multilayer material deigned to be engraved. When you use the proper power level it is removing the top layer but leaving the middle lighter layer ( probably the anodized surface). The higher power burns off the lighter layer underneath, giving you a crappy result.

I kind of like the effect. I raise Mastiffs and engrave a tag and leather collar (that’s how I got my wife to agree to the GF) for each puppy when they go to their new families.

haha. If I’d tried that with my wife, she’d have pointed out that you could buy several hundred premade tags either at our local Petco or through her animal hospital for one glowforge