So I am new to using a glowforge pro which is a very early model. My dad got it when they came out but due to multiple reasons he never had time to use it and it sat in it’s box until a few months ago and I got it.

I have some pine that I cut some 5/16 chunks off of an old fallen tree in the backyard. It engraves everything perfectly but when cutting whether I do 3 passes at full power 150 speed or 6 passes at 250 or any other combination there are small areas that are barely hanging on after the cut. I can pop the finished work out but what’s weird is that if I add a second piece of identical wood under the work piece, that piece will almost totally be cut through but I’ll still have these tiny little spots that aren’t cutting through on the main piece. So the laser is powerful enough to cut way through my material but just isnt consistent. I’m only cutting a design about 4" square.

Everything is clean and new. Minus the gas tube which is 4-5 years old of course.

The machine didn’t come with a chip tray so I just have the material spaced up as close to the laser as I can get. I have the material thickness set at the max .5" and I have varied the height but the same issues happens. Has anyone experienced this before? I’d like all the pieces to just fall out like everyone else I see on youtube. Is there a setting I’m missing?

It’s probably the wood. When you see other people cutting stuff and it just falling out, they’re using specialty laser materials. Generally plywood, not solid wood, with a fiberboard core. This is what allows you to laser cut it consistently, because it always takes the same amount of heat to burn through that material of consistent density. The parts of the pine that aren’t burning through are maybe dense spots or sap. No two chunks of solid wood are going to be the same, especially if it hasn’t been dried/seasoned.

Ok thanks. I don’t think it will let me begin the cut without specifying a material thickness. The focus is indeed auto however.

I can try to grab some other material and see if it cuts out more consistent. I suppose it could be some kinda sap thing. The wood is dry though, it fell over a year ago. The spots that hang on are just so annoying to figure out just because the laser in other areas has literally already cut through twice the thickness of material

Softwoods like pine, spruce, etc. generally do not seem to do as well as hardwoods. Not that it has anything to do with hardness, as balsa is technically a hardwood, and longleaf pine a softwood as I have seen some that will break a drill rather than let it cut. But then longleaf pine is also called fatwood as it bursts into flame so readily.

The species sold as proofgrade are in general better to use, especially starting out, even if you do not use the proofgrade. Other species may have other issues and it can be very complex, aside from being a lot more expensive.

There is also the issue of the gunk of evaporated wood (and glue) that will get all over the inside and lenses making stuff work not as well. MDF and oak are especially bad, but if you see smoke then it is an issue that will need cleanup eventually. I have not cut enough softwood to know for sure, but if the species is mentioned with chimney fires that would be a clue. 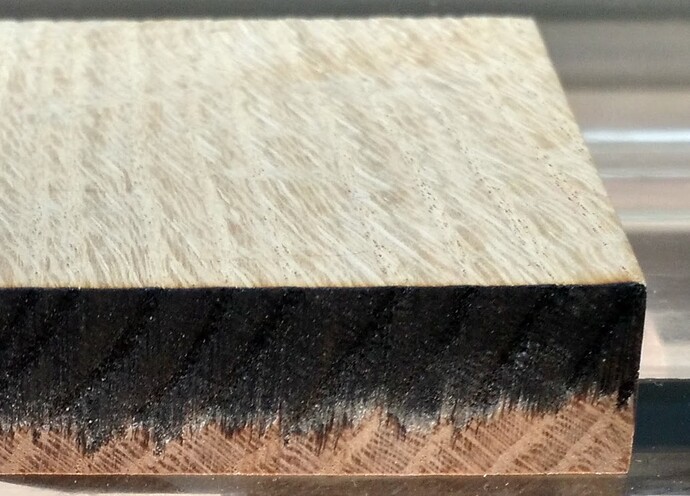 That is one difference that @dan84 was referring to between natural wood and a veneered core that is consistent density.

If you click the 3 dots icon in the menu, then “set focus”, then click on your material, it’ll measure the material thickness itself (and sets the focus for the cut to match) and let you hit print without typing anything manually.

You do not have to specify a material thickness. In fact, things work better for me if I don’t.

Well the first tests I did were MDF and I vent everything with a booster fan out of an old oil burning HVAC chimney lol. Everything I cut makes smoke, I thought that was normal. I’m going to go look for some fallen oak and see if it’s any different. Maybe I’ll just do 10 passes to eventually get through. Trying to minimize scorching on the sides that eventually cuts into the work. It seems like multiple passes at a faster speed helps

Everything I cut makes smoke, I thought that was normal. I’m going to go look for some fallen oak and see if it’s any different.

Smoke is normal, but some things are worse than others. One of the first non PG woods I purchased was some 1/4" Oak plywood, 4x8 sheets cut nicely into 5- 19x48 inch sheets that work well with a Pro. and I bought several sheets so I had a lot of it. Some of the fibers are so tough that they don’t actually burn but get tossed out when all the mass around them burns away first. This led to having them pile up like dust bunnies in the exhaust.

That material was strong but rough and multiple light passes exaggerate the variation within the wood which may be a part of your issues. I was doing relief engraving that works well in other hardwoods, but in oak the strong grain overwhelms most designs. If I had the ability to mill my own deadfall oak would be my least favorite hardwood.

Dang, well around here the only trees are pine and oak. The only reason I was doing multiple passes was because one pass wasnt cutting through. I guess for certain designs the store bought materials might be best.

only trees are pine and oak

Just think…If you lived in Miami they would have trunks of mahogany lying about in trash piles.

The thing is unless it was established as a tree farm thinking there were only pines and oaks would be like the rockhound that took everything for granite. If you look deeper you might be amazed. OTH, most store materials will work a lot better even getting started, though there are an entirely different set of issues there.
If you look for materials sold to laser cut, you can bypass much of that, however. (this is why they have Proofgrade to avoid all those issues)