I’m going to keep posting these each time they happen. preview image is not good and warped. 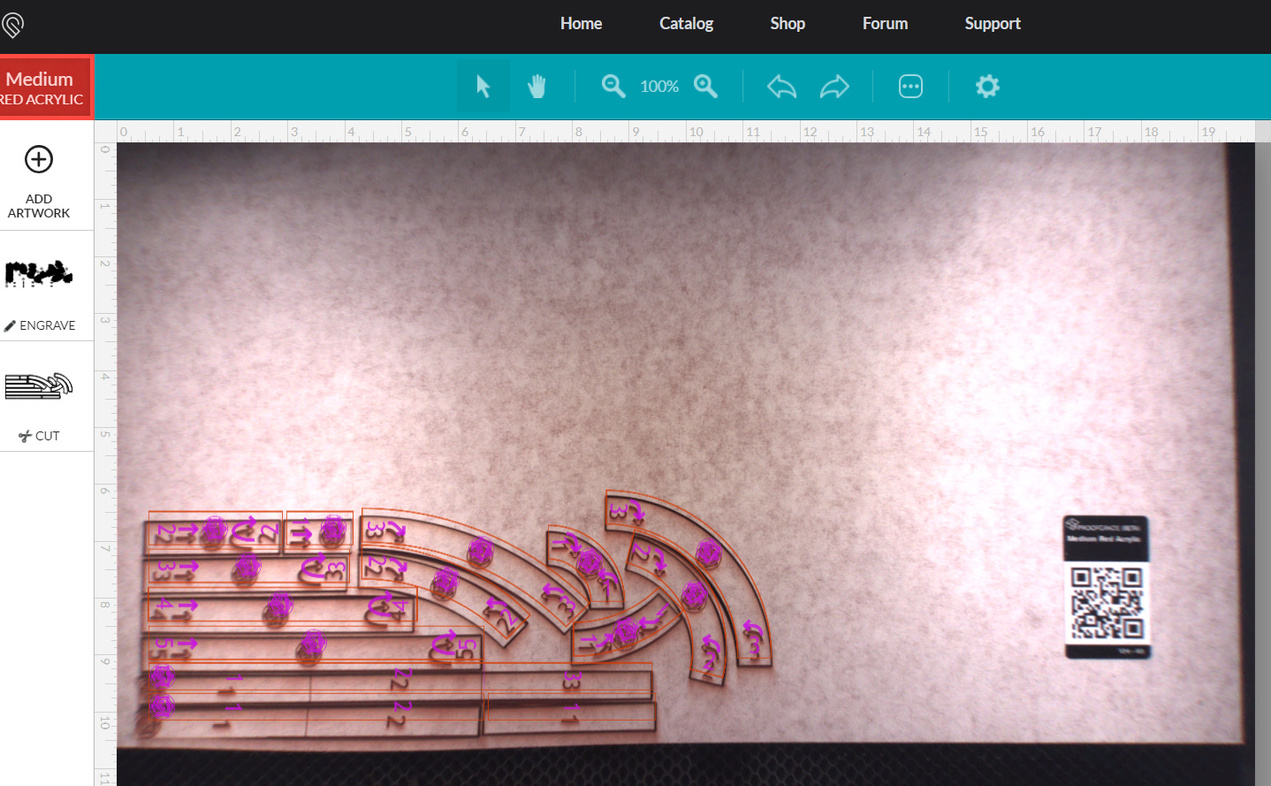 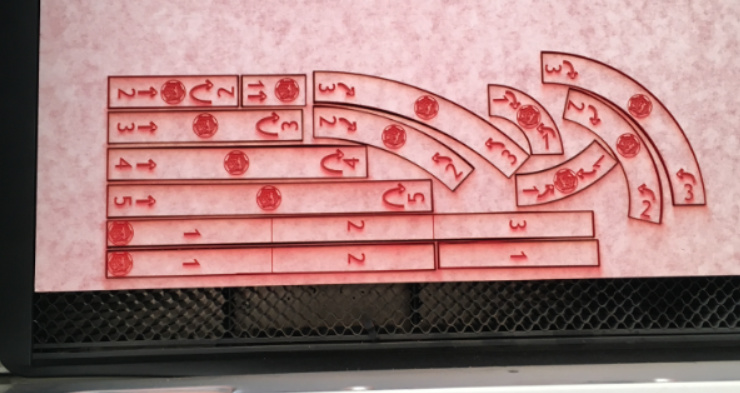 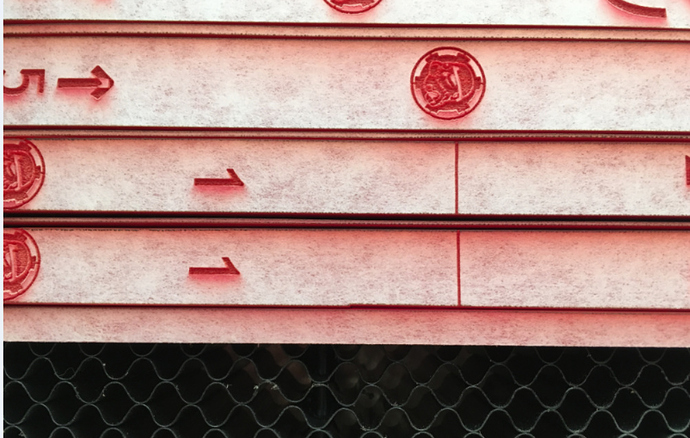 If by discontinuity you are referring to the extra bit inside the arrow, that is caused by two overlapping vectors. Where they overlap they cancel each other out. You need to use the Pathfinder…Unite command in Illustrator (sorry I don’t know the Inkscape equivalent) on the two overlapping parts to eliminate that unengraved bit.

Nope, that one is my own bonehead move, I’m talking about the bottom cut, about halfway between the 1 and the vertical line.

Not saying what is good enough, but am sure you have been told multiple times to expect up to 1/4" offset at this time. Looks like that’s about what you have, so guessing you will get a very polite but unsatisfying response.

Have no idea what you are getting at with the “discontinuity and weird cut thickness”. The problem description will need to be far more clear.

circled in green, the cut is discontinuous or “wiggly - wobbly”
upper cuts are thicker than lower cuts

Okay. I see the little step up the line takes on the bottom and then continues on that track. That looks like a jumped tooth on the belt/motor when it was moving sideways. Might have been crud in the gantry or belt that got spit out because it didn’t continue to do that on up the design.

Could also be a line artifact in your design.

The different line thicknesses usually are a result of either overlapping lines that cause double cuts or a thick line that is actually a shape and not a line and it’s cutting both sides of the (incredibly narrow) shape.

That was what I tried to say. Where the cut is supposed to be and where it ends up can be up to 1/4" off according to Support. That has been a common Support response for months and was in the email describing the offset when you accepted delivery. Not saying that’s good enough and the intent is to improve it significantly through a S/W update using bed mapping for each unit. Not there yet.

Edit: you are saying that yours is more than 1/4". If it is not due to warping then you may have an issue. But read below: Looks like warp to me.

As far as the alignment goes, if you look at the crumb tray the grid line is far straighter than what the material and cut show. That to me indicates that the material itself is warped and not held down to the tray. Doesn’t take much to get that effect. Of course I’m not there staring at your material so this is complete guesswork based on what I see on my machine.

The cut line shown circled in green might be an issue to be improved. Don’t know.

Where the cut is supposed to be and where it ends up can be up to 1/4" off according to Support.

That’s not quite an accurate statement. Where it appears visually may be off by up to 0.25". But not relative to the rest of the design. In other words, a cut that is designed to be 1.62" below another object will be 1.62" below that object. It’s only the visual placement that we can expect to be less than perfect at this time.

It’s a very important distinction. I hope I stated it well enough.

That is expected to be gnats on accurate and repeatable as long as the file doesn’t have a problem or an interpretation incompatibility.

That is expected to be gnats on accurate and repeatable

I believe that is pretty close to the intended idea once they apply the lens correction. Of course, it’s not the world’s greatest camera, and neither are our eyes, so we’ll only place objects as close as we can within those limitations.

This one the preview is slightly more than 1/4" off

This one is a little less than 1/4" off, but look at the slant, the left edge of the cut(as positioned) is at an angle from cut (actual). All images in the file are in alignment vertically, spaced automatically using inkscape.

This one the preview is slightly more than 1/4" off

I am wondering about the challenge of this nomenclature. In one sense it is not a preview because it is the image taken after a cut. The post cut image with the design overlay is always out of whack, way more than I ever expect it to be after a cut.

The orginal preview with the design over the material is pretty much where I expect it to be on target, certainly well within the 1/4" error. It’s the post cut image that is whacked.

Does it cut at all close to where you want it to cut? Looks like you were able to get that row of medallions pretty close to the edge.

It’s close to the edge, but I purposely positioned it 1/4" up from the edge to account for any drift/difference from the preview to the actual cut. the cuts from the last image drifted a bit off the edge on the right side.

I call it a preview, because it’s the only positioning tool I have. The preview image stays in the same place relative to the material both before and after operations, the cut not near the preview.

Sometimes material will move when it’s cut due to internal stresses being relieved.

A couple questions about the discontiguous cut…

…
I suppose if the head is rocking back and forth in the mount it might cause one direction to actually cut wider than the other, but I don’t know how possible that is. Some kind of movement-induced shifting of the lens or mirrors could also be a cause, I guess, but that’s getting a little far-fetched as well in my opinion (an opinion based on almost no evidence).

Yes, a laser beam doesn’t just get wider, looks like a double cut…? Movement wouldn’t do that would it? the whole line would jut, not get wider.

the whole line would jut, not get wider.

One would expect the error to be greater the further from the center. This can appear as “warp” or lead to a slanted line like that.

circled in green, the cut is discontinuous or “wiggly - wobbly”

Definitely check the source SVG for double lines. As for the step…check to be absolutely certain the line is dead horizontal. That looks like the artifact one would get if the endpoints of the vector are a single step different.

Perhaps post a zip of the SVG? The pros at dissecting them could help.

Looks like the larger cuts were from a doubled over line, the long sections of some of the parts had an extra line for some reason. The warp from the camera accentuates the cut difference. this would probably also explain the step that showed up in the part, if it cut / dropped / resumed cutting it would be off.

if it cut / dropped / resumed cutting

Dropped? Do you have the material raised in some way? If the cut drops it’s not flat to the bed in that area.