What have you crowdfunded?

Continuing the discussion from Another HUGE crowdfunding scandal, this one makes me sad:

Seeing a discussion of failed crowdfunding (yet again) and ensuing discussion of losing faith in the process… I am curious what else people have backed.

I stayed out of pre-orders for a LONG time. Finally jumped in with both feet about a year ago.

My big ticket items: Glowforge, Tiko, Oura, Lily, Walabot.
Glowforge is trucking along.
Tiko has lots of updates and seems promising, I feel at this point the worst case scenario is that I get a crappy printer, but minimal chance of getting no printer.
My Oura rings show up tomorrow!
Lily continues to release updates. Looks good, but at this point I am not sure it was the right way to go for a drone camera.
Walabot arrives in the next few days. Going to have to hope I can actually do something with it.

My small projects: Dead Man’s Draw, EcoQubeC, LeverAxe, Wonderful world of Creatures & Code, Karmaka, Control, Pins Collective
Dead Man’s Draw: Awesome game. I worked with Derek Paxton back in Civilization IV when the game was created in first incarnation. Playing it physically was SWEET!
EcoQubeC: So far, not impressed. But I finally have clean water and a fish, and the kids like it. So all good.
LeverAxe: Haven’t used the damn thing yet >< But looking forward to doing so! I have it, but haven’t needed to chop wood because my wife suddenly stopped wanting to make fires every day.
Wonderful World: Awesome book. My kid will be ready for it in about 2 years.
Karmaka & Control: No game yet. I doubt there will be any issues with the projects though. Board games are a pretty safe backing.
Pins Collective: Come on… it’s freaking awesome. Even if I will only ever wear it once…

My only failed project I backed: Real Heroes for Real kids (hey… it was my kind of shirt. And I hadn’t realized how easy screen printing is yet)

I had never backed a crowd funding campaign before the Glowforge. The closest I had done was to pre-order a Logitech cordless mouse a month before it’s release. A few weeks ago, I backed an Indiegogo campaign to help someone who is both a friend of mine’s mother and also the best friend of another one of my friends. She wanted to buy a closed “amusement park” and open an educational park for rare breads of domestic animals. I wasn’t comfortable with the Indiegogo model that says she could keep all the money even if she didn’t reach her goal - which she didn’t. As such, I contributed at a much lower level than I would have. She just reached out to say the purchase of the land fell through but that she would move forward with acquiring rare bread animals and travel to schools and other places with her educational program. She gave the option of transferring our contribution to the purchase of an animal, development of educational programs, or to return the funds. My wife and I decided to let her keep 1/5 of our contribution and asked for the rest back.

Lots of little electronic stuff, a few local projects. I’ve gotten used to things arriving late. The only one that bit the dust bigtime was the open source vacuum forming rig. One of these days I’ll build my own, but I need an excuse, erm an important project for which formed parts are crucial.

The others projects I crowd funded:
Tesla Museum
Con-man
and Dresden Files Card Game (this one is still ongoing if people want to jump on board.)

Another was a Reg A+ equity crowdfunding (you get stock in the company instead of a product or perks) :
Elio Motors.

So not very many.

Heres a link to my Kickstarter profile. You should be able to see what I’ve backed. I’ve backed 42 Kickstarters. 1 is still going. 34 got collected. 7 failed. From the 34 that collected I got about 25ish.

Picking out a few notable ones.

The Originals by Savage Jerky Co:
AMAZING JERKY. I’ve backed it twice and will do it again. Haha. Very friendly people too. Delivered fast.

Prank Greeting Cards that don’t stop playing music:
SO MUCH FUN. Well worth it. Got them pretty quick.

SnapPower Charger: A USB charger in a coverplate - no wiring-
Amazing, easy and very professional.

Ditto - Don’t miss important calls.
Don’t forget your phone: I use this every day. It’s my favorite Kickstarter I’ve backed.

The Moonshot Ring Launcher: The Next Revolution In Fun:
Campaign failed but I purchased one later. It’s been a TON of fun. Well worth it.

I also tried launching my own and didn’t quite make my goal. I hope to launch it again in a year or so.

The only crowdfunding I have participated in before Glowforge was charitable donations to animal rescue organizations. One to a group of folks rescuing feral cats from an abandoned trailer, and the other to an organization trying to purchase a used portable ultrasound machine for checking strays for babies (they never did purchase it–I think they realized they would need too much tech support & maintenance–but the funds did go to helping the animals). I felt good about the funding in both cases because the animals’ lives were definitely improved so the goals were accomplished.

Not much, still waiting for my tiko though… 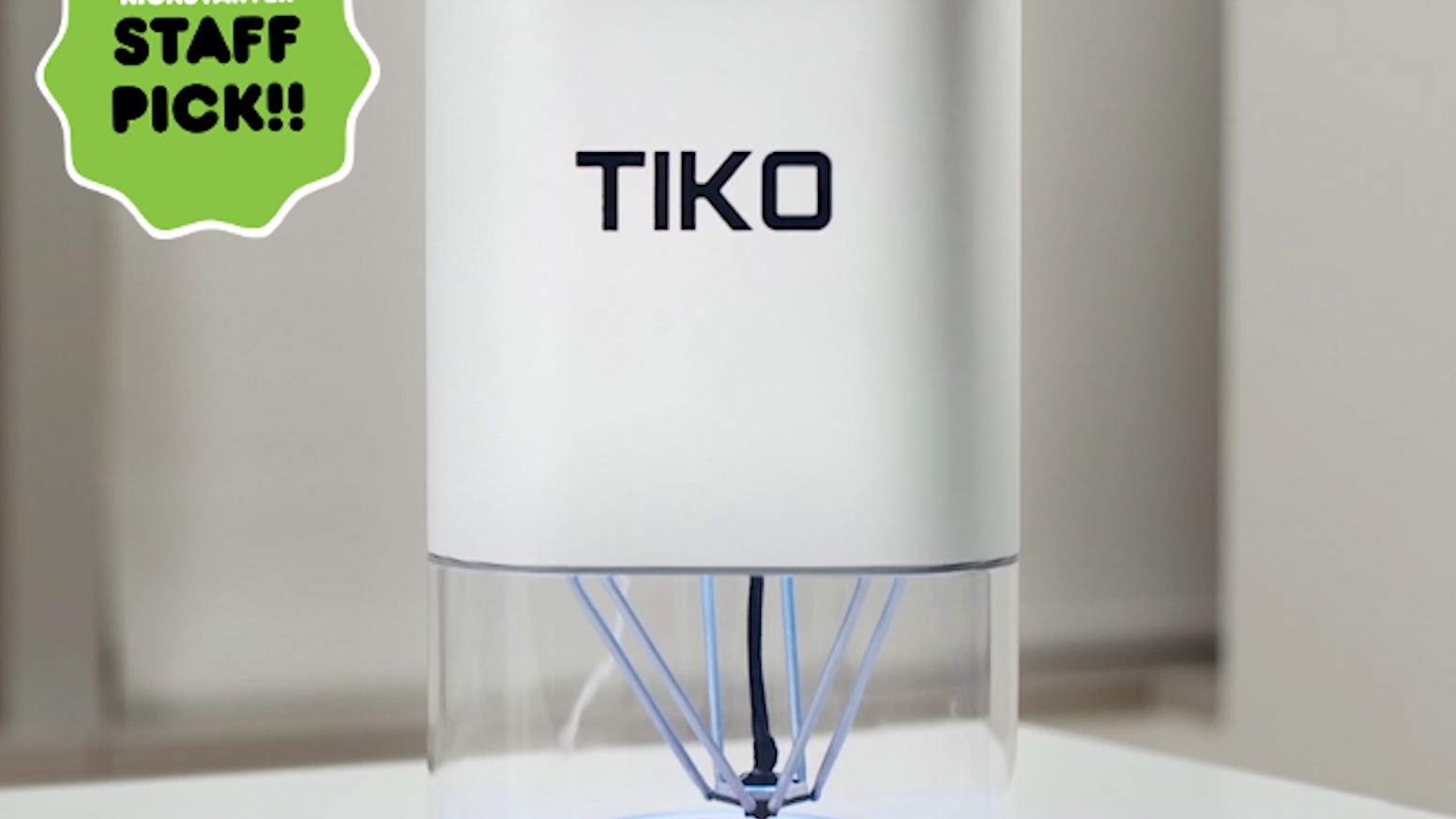 Tiko is the 3D printer you’ve been waiting for. Simple, accessible, and dependable, all for a pledge of $179.

Before Glowforge, the only pre-release product I backed was the initial FitBit. Very interesting as we were constantly updated by the team on the progress on product design. The ‘back to the drawing board’ decisions, the prototype products being produced in Taiwan, to the shipment schedule. And look where they are today! I feel confident that Glowforge and the product family that will eventually evolve will far surpass our greatest expectations. Keep up the good work!

We have backed a number of crowdfunding campaigns for art projects and camps at Burning Man over the years. Some of them were late to deliver their promised perks/rewards, but I don’t think we ever got stiffed by anyone. We didn’t get to see and experience all the stuff we funded out in the desert, but as those who’ve been can attest it is a big, big place. We believed in the people and the projects and were happy to support.

Our camp ran a crowdfunding campaign in 2013, for an art project build we were working on (a climbable ziggurat made out of slotted wood parts). The entire project was mostly self-funded, but when costs went beyond budget we made the difficult decision to ask the community for help. We were careful not to get carried away with thank you gifts for supporters, as we wanted to make sure we could deliver everything promised on time. We hit our funding goal (woohoo) and got everything done on time.

Outside of that, much of the other crowdfunding we’ve been involved in has been to help members of the community with emergencies (medical expenses, memorials, etc). There may have been a gadget or two, but we tend to be more conservative and are willing to wait until the makers figure out how to be a company that manufactures goods.

I looked at the Coolest cooler, but I backed out due to their original goal vs what they had brought in. If you are thinking you need to sell $40K worth of coolers and you sell $10 million, there is so much you have to ramp up in terms of staff, office/warehouse space and manufacturing to meet that goal.

Successful wineries and breweries all have a ceiling they hit where they have to greatly increase their capacity to meet demand, which is one of the top reasons they sell out to larger companies. They can’t keep up with demands and can’t get a big enough loan from the bank to expand fast enough, so they are forced to sell out.

As for the Peachy printer, it seemed interesting, but to me, I didn’t see how they were going to make money selling for $100 each and again they sold a heck of a lot more than they were hoping to sell. By the time you add all of the development, staff, assembly, packaging, etc., I thought they were going to be way over budget.

The MoonRay - DLP 3D printer was the most expensive project I backed until the GlowForge. That printer just arrived about a month ago.

I’m sure I’ll eventually get burned by one, but remember that the media and bloggers only cover the failures, so you don’t hear about the thousands of crowdfunded projects that were a success (but probably delivered late).

Had no idea there were so many people on here who are backers. One question , how has the support been post delivery (if support is necessary)

Aside from The US Government and the State of Missouri? Glowforge. And I do Patreon for Pomplemoose and Nataly Dawn.

Aside from The US Government and the State of Missouri?

Haha, I was about to say that I have “crowdfunded” many CalTrans and C-DOT projects, almost none of which were “shipped” on time

Glowforge is the only one for me. A couple of years ago my brother and sister backed a take apart paddle board (well, I suppose technically they backed four…) and it turned into a long, drawn out, terrible fiasco. A few months ago they finally got to pay extra and receive most of what they had paid for. The whole experience dragged on for years and was just messy; it made me trigger shy about other projects I was interested in.

But Glowforge was too good to pass up!

I’ve backed several.
Like @joe I also participated in the regulation A+ crowdfunding for Elio. Besides having made deposits of 1000 and 100 dollars toward a couple of them.

I’ve backed a few kickstarters
The most recent is
The Pro Brewers Siphon,
fully funded but still going.

Beer Hunter: The Movie
A movie about Michael Jackson (the beer guy not the pop music icon )

Qbox: The Wi-Fi connected BBQ Smoker (Canceled)
Started by a friend of a friend that unfortunately wasn’t funded.

OVAL - Smart Sensor. August of 2014
Still waiting, but they are supposedly close to shipping.
And finally

School Desks for Orphans
A campaign to raise funds for a privately operated orphanage in India that was so successful they were able to buy a used bus in addition to the desks.

I funded a board game, Viceroy and some shoelaces. Honestly not even sure whether they were on time or not because once I ordered them, I just stopped paying attention because I had heard such horror stories about Kickstarter campaigns. I have one friend who is past the 2 year mark waiting for a collector’s edition of Tokaido.

What do you think of the Sondors Electric Bikes? I recently started thinking about electric bikes for me to commute and for my wife to be willing to ride as far as I like to go when we are on vacation.

Love them! I’ve added the lcd controler which makes them even more amazing. I’ve heard of other owners being offered upwards of 1200 for their bikes. That said, if you do have issues, support is often difficult to come by. Some have had prompt response BUT most people I know of struggle to get a response. I know many that gave up and just bought new parts on their own.
A coworkers husband just ordered one to tow his little trailer into his dear stand in the fall in Iowa

I commute on mine regularly, about 6 miles each way with large hills to deal with and have no problem. I’ve done some trail riding but not alot.

Nice! Thanks for the response!