I’ve never worked with wood before - thanks for being patient with me!

I do not understand the difference between proofgrade hardwood vs. proofgrade plywood.

A. Am I correct?
B. Does this mean it is stronger than hardwood?
C. The glue is safe (obviously, otherwise it wouldn’t be for sale) but what is it made of?

I just need the basics - as I mentioned, I do not have any experience with wood whatsoever.

The plywood is two fairly thick veneer sheets sandwiching an MDF style core. The glue used is laser-safe. No idea if it is compostable or not, but you don’t actually get sawdust out of the laser anyway. (You get just a bit of cold ash, which gets blown over plants and actually seems to make them grow better. The decorative grass right in front of the vent outlet has shot up over the last few months.)

There is a nice satin finish pre-applied to both veneers on the plywood.

The hardwood is a solid piece of wood. They are both strong. If you want to 3D depth engrave, you want the hardwood. On the ply you can see once you have cut through the veneer and can’t wash the plywood to clean it up.

I’ll add to this that the hardwood can be snapped along the grain relatively easily because it’s so thin. It’s not an issue for decorative things but may matter if you need something relatively thin to hold up a bit of weight or not break under stress.

Also, similar what @Jules said about the 3d-engraving: you do see the structure of the plywood on cut edges so you can see that it’s not “one” piece of wood. Also once you clean the cuts up the edges of hardwood looks more like natural wood than black charred wood. Here’s an image of what the edges look like after they get cleaned off a bit. Maple hardwood on the left and ply on the right:

Can you help me understand what MDF is a little better than what I’ve read out there? I can’t fully wrap my head around it…

And if you really clean up the sides with some sanding, the layering of the plywood becomes really obvious vs. the solid look of the hardwood. Here’s a piece made of a glued stack of cut Proofgrade maple plywood sanded to a smooth finish on one end, and the thin veneers of maple absolutely stand out in color and texture from the fiberboard bulk of the center of each layer. 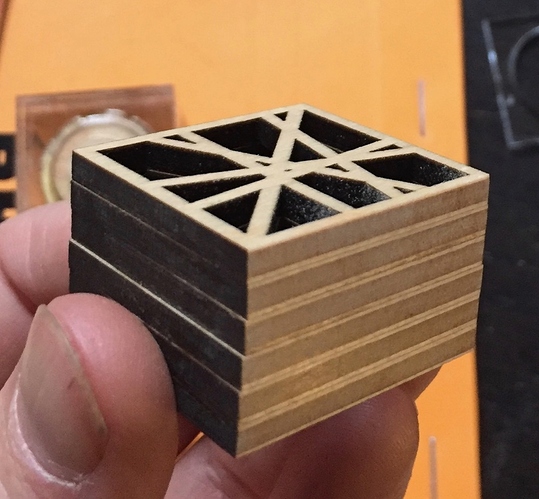 Far as I can tell, it’s a mixture of wood fibers and glue. It’s Medium Density Fiberboard, so it’s a paste like mixture that’s been …uh…extruded? Planed? Sanded down? Not really sure how it’s manufactured, but it is a manufactured product.

The problem with using MDF in lasers, (with the exception of Proofgrade, which was engineered for lasering) is that you can get really dense glue that’s hard to burn, or might be less than ideal from a toxicity standpoint. So not all MDF is created equal.

Perfectly safe with the PG stuff though. I’ve always had that tic.

(Seriously, Glowforge spent a couple of years testing it and making it safe for us to use.)

Is the MDF in the plywood and the draftboard basicallty the same thing?

Yep. The Draftboard is just a cheaper alternative that Glowforge provides so we don’t rip through so much Proofgrade while testing designs.

so it’s a paste like mixture that’s been …uh…extruded? Planed? Sanded down?

MDF contains a mixture of wood solids, wax, and resin bonded together under high temperatures and high pressure then sanded. Non-PG versions often contain formaldehyde. MDF is heavier than plywood/solid wood and completely consistent since it has no grain. So no voids or knots. Much cheaper than actual wood but about 1/10 the longevity. It’s not as strong as most woods - thin bits/corners can easily snap or chip under pressure. Long, unsupported pieces snap if too much pressure/bounce applied. (This is why you see it comes in sheets and generally not 1x2s or 2x4s) Less likely to warp and sands/routes/CNCs beautifully due to the lack of grain. Takes paint very well - not so much for stain. Unsealed MDF should not get soaked, it’ll swell and not go back down after drying. Definitely not good for outdoor settings.
(We use it a lot in my industry, nothing we make is intended to last more than a few months)

(We use it a lot in my industry, nothing we make is intended to last more than a few months)

You work for Apple? Cool!

(We use it a lot in my industry, nothing we make is intended to last more than a few months)

What are you doing now?

Hi five back at ya! I’m now in the tech world, but sneak off to design a show once in a (long) while.

plywood with an MDF core is actually going to be structurally weaker than regular plywood, and possibly hardwood as well. That is good to know.

The thing with any plywood is that the multiple layers give added strength and rigidity regardless of the grain of the surface veneer.

So there is proof grade plywood and there is “regular plywood” - and these are two different things?

This is part of my confusion!!!

“regular” plywood = plywood purchased from anywhere else with many different variations of composition (some with MDF cores (thick or thin), some with solid wood cores, some with few layers, some with many layers). This kind of plywood may or may not have components that are laserable.

Before the discussion takes the inevitable turn… Proofgrade plywood fits the official definition of plywood. And other companies sell similar products under the plywood category. Just not what most of us think of when we consider plywood construction.

I know that feeling quite well @jed_ike

I took a long detour through video games and corporate tradeshows before landing where I am now. I wish you may happy side design jobs.