Didn’t really need this level of print failure the week before leaving for MFNY… This actually sheared off the nozzle wiper (ugh - luckily the printer is open source and I can print another) and seems to have damaged the E3D V6’s thermocouple as it won’t heat back up. This was because I was adding a pause in the print’s G-code by hand so I could embed a UHF RFID tag into the model’s core for a trial and apparently it went nuts while paused (not sure why - have to look into it). in looking the heat sink doesn’t appear to be square to the carriage so worried there is damage there too… Nylon always wins! 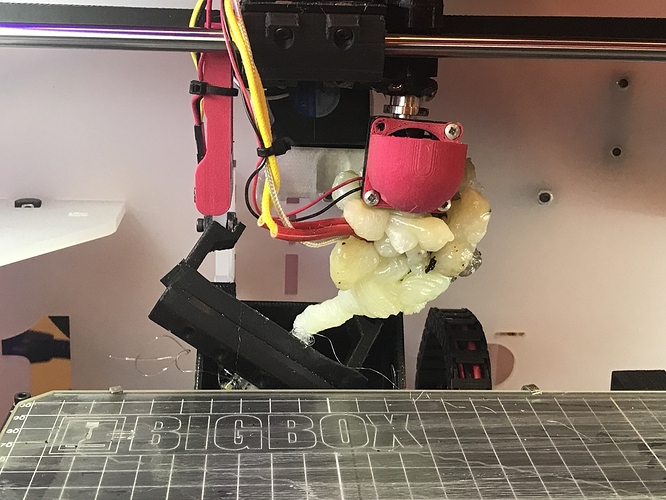 OUCH!
That has to be one of the worst 3D printing fails I’ve seen… and I have seen my fair share!

I must have missed that one!

Yes, the infamous “incident” also a nylon failure which tore half my carriage off and threw the print bed onto the floor. Nylon 910 aways wins…

I must have missed that one! 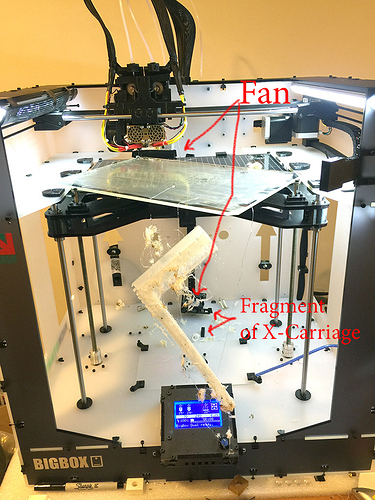 Which the original incident or current?

The original! I want to know that story!

The original! I want to know that story!

So the handle of the finnoccietto retractor peeled off (curling, hand’t mastered adhesion of nylon yet) and caught the head going over and wedged against the case which tore the entire right side of the x-carriage off and some strings of adhered nylon pulled the borosilicate bed out of the clips and ejected it. Had to print a whole new x-carriage to fix it. suspect I will have to do the same. Hopefully the hotend is functional as I won’t have time for a new one before MFNY.

What is your setup for the time lapse? I was considering attaching a webcam to my setup because it runs in my work shop in my parents basement (only place I have space) and most times I go back to my apartment and don’t want to drive 15 minutes to go check on it.

What is your setup for the time lapse? I was considering attaching a webcam to my setup because it runs in my work shop in my parents basement (only place I have space) and most times I go back to my apartment and don’t want to drive 15 minutes to go check on it.

It’s the Raspberry PI camera V2, on the built in arm on my printer (in the pic up above you see it hinged out on the right) since I only use printers via octoprint it manages the time lapses (I added a mounted 256gb thumb drive to my pi to store the time lapses)

Hey @discourse any chance we can figure out why vimeo links die off after initially working fine?

Sure let’s see if we can reproduce this on meta.discourse.org first.

Oh no! That is way worse than my recent one, so sorry. Did it just snag the whole object being printed and drag it around, or is that just the backup?

Did some testing at try.discourse.org and the link worked until try was
auto-reset. Meta is currently on a special branch testing the ruby update
so I’m not going to get a conclusive test there. I’ve added a link to my
sandbox, so far so good. I’ll keep you informed.

I have not been able to reproduce this. Are you still encountering issues?

Do you mean you see a valid video up above? All I see is blank like this: