It keeps on raining? I wouldn’t necessarily call this a pour. I went to open my machine the other night, and the back right hinge decided it would release itself from bondage and broke free from the adhesive they’ve used. I thought, no biggie, I’ll glue 'er back up. I used what I had, Gorilla contact cement, and let it sit for 36 hours. I couldn’t clean anything since the hinge on the left refused to let go, so much so that when my bad glue job failed, I had to undo the nuts holding it to the frame.

Right before taking the lid entirely off, I noticed my handle had a little give in it, and wouldn’t you know it, it decided to pop off with a little bit of force. Not sure what adhesive they used on this, but it clearly has an expiration when the minimum amount is used. The “metal” used for for the trim pieces seems to be plated plastic - guess that saves on cost, weight, and allows for flexibility. Hard to say whether the flex is beneficial or not, where a full metal frame that replaces the LED rails and goes from the back to the front might seem more durable, I’m no engineer. The glass is already quite heavy, so I’d guess they’d need even stronger hinges to bear that weight. Also, since it’s modular, instead of the whole frame failing, only one part should fail at a time (unlike mine).

Anyway, I’m one of the lucky ones with two machines so this won’t set me back much. I’ve had this particular machine for two years (?) I think. It’s had a new power supply put in it, replaced the black ribbon as well as the board that connects to, and have replaced the accessory board that sits near the fan on the left of the machine. The PS was done by the repair company, whereas I did the rest. Guess adding the lid to my list is getting me one step closer to being an (un)certified pro in refurbishing 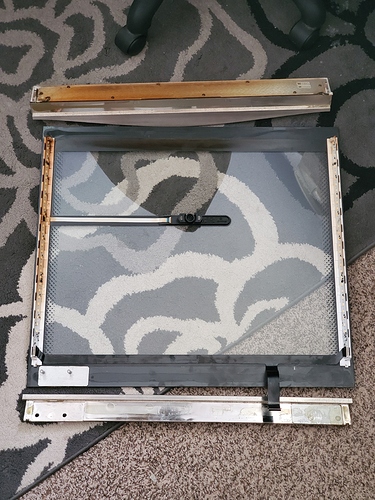 I know there are plenty of you who have your day one machines, but guys like me get the short stick I guess

That is not cool.

Certainly doesn’t appear to have as much adhesive on the lid mount plates as it could/should? The pic was before you repaired it?

Technically after the “repair”. My glue didn’t hold, and I scraped it off pretty easily. The stuff they use does need to be scraped off with a good amount of force from a razor, but it is pretty thin on the majority of the pieces. One corner of my handle did have a decent amount of glue, but that’s the side that failed first. 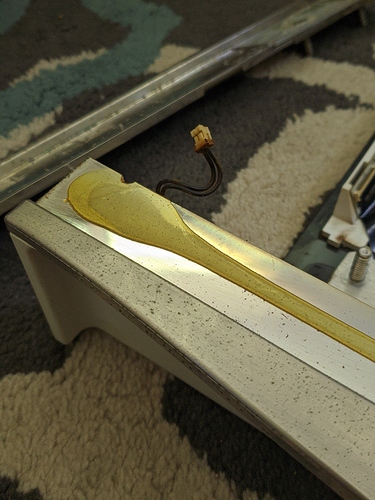 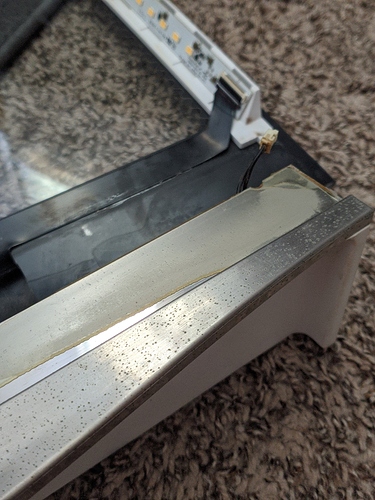 It Is unfortunate that the bead of adhesive is so narrow. A good deal of the ability to resist the torque of the hinges is lost because of the shape of the bead path. If the same amount of adhesive was used say in a zizag pattern the resistance to peeling would be dramatically improved.
I bond stuff all the time and when this under-application of adhesive happens it is usually because I hate to clean up squeezed out product, and possibly to save time & cost.
I believe that with the right product and very good cleaning it should be possible to repair. Loctite make some excellent metal to glass two part adhesives…

All fixed back up. I used a two -part epoxy and let it sit for the last three days. It actually seems stronger than the other stuff that was used, because the door used to do a sort of “cracking” noise when opening it. It’s always done it, and even my second machine does it, so it’s interesting to not hear it anymore. Anyway, just glad that home repair is possible, and hopefully people can see that instead of spending the close to 1k on a doable repair. 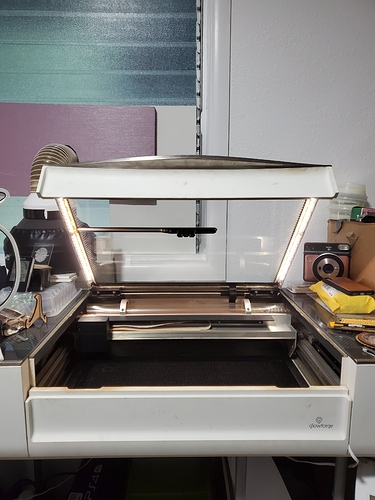 This is the extreme of what my hinges will hold up, but glad that they hold still. Also, don’t be like me if you ever find yourself doing this repair. I forgot to plug in the front magnetic sensors to the LED strips and was getting the Lid Open dialogue. Was worried I hadn’t glued the pieces together correctly

Congratulations! Which 2-part epoxy did you use?

I was wondering have you moved the machine much? What kind of environment is the machine in? like temp ranges and things like that

Which 2-part epoxy did you use?

I had some Gorilla Glue epoxy stuff. It said it was good for metals and glass, so hopefully it holds for another few years and beyond.

@primal_healer I have moved this machine a couple of times, but not very much. It’s been sitting in the same place for the last 7 months, and prior to that, it hadn’t been moved for around a year or more. Environment ranges in the high 60s to mid 80s, humidity ranging from mid 50s to high 70s or more, don’t pay too much attention to it until I’m dripping in sweat just standing in my own house

This is just my bad luck machine. I had commented on how it had been broken a few times before to a friend who had stopped by, and how I was sure something else on it was bound to break, then a week later, this happened. Gotta toss some salt over the shoulder, and burn some sage or something, because jinxing myself is the worst!

Such a bummer! I’m glad you were able to fix and get it back in working order! Thanks for sharing your experience and repair technique.

Yikes! Glad you were able to complete the repair. You have certainly had your fair share of repairs needed.

The repairs look great. You might have yourself a side hustle — Glowforge Repair Technician

I would legitimately take those repairs on. I wish they’d let us become certified to do it, because I would go through whatever I had to for it to be a thing.

Your post revealed your are detailed, patient and fearless. I know you would become a ”Master” Glowforge Repair Technician.

After reading your post I learned something very important. I am never going to use the handle to lift the lid. I will now use the bottom white part to push up on the lid.

The lid is very heavy and until I read your post I never would have imagined the handle would break loose.

Thanks for the compliments! An even better idea I’ve been having is using a large suction cup that has a handle, placed directly on the front center of the glass. That should save some torque issues when lifting. I know this problem is quite rare, as I haven’t seen more than a handful of people post about, can’t say as to how many just emailed, but it can happen. I just happened to get a machine that had some out of the ordinary issues, but it’s shown me that almost everything that breaks is easily repaired. I wish GF support would roll out a more detailed list of “known issues” with their known solutions, but that would also require some wiggle room with the customers purchasing the machines.

I’m comfortable taking mine apart because I’ve had prior experience in breaking down electronics, and being out of warranty, I didn’t have much to lose. Can’t exactly say that’s the case for your average buyer, so even if they released fixes, there are other things that could be the problem, or problems becoming worse because of someone attempting self repair.

A handle similar to this would be excellent: 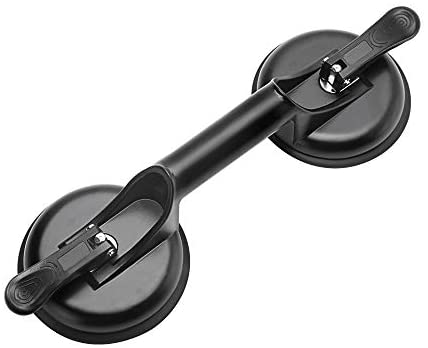 Well, if needed I will hire your services! Great repair.

I saw that you said your lid doesn’t stay open very well. Replacing the hinges is a surprisingly simple thing to do if you were ever wanting that done

My laser was replaced about a month ago, so I will stick with my Maui hook until I am far out of warranty. Are the hinges adjustable? You got replacement gf branded hinges?

And I haven’t had a spam musubi since the quarantine!

I didn’t need to replace those (yet…knock on wood), just had to glue the handle and back support back on. They’ve been able to source strange parts for me in the past, I don’t see why they wouldn’t be able to source the hinges. Since my left hinge bracket was still very much glued on, I just released the nuts holding onto it. If you take a look at yours, you’ll see there are four nuts holding them in place, take those off and the hinge should just slide away. You’d be removing the hold lid in the process, but the hinges would slide off of it pretty easily.

And get yourself a musubi! I’ve gotta go shopping tomorrow, so I’ll probably snag one from 7-11 on my way.