Why is this cutting twice?

I’ve got a super simple file here, trying to do a single pass cut. For some reason it’s not only doing two passes, but reversing direction on the second pass and actually offsetting slightly as shown in this photo. I know it’s usually a case of the design being stacked accidentally, but I’ve quadruple checked and can’t for the life of me figure out why this would be happening. Anybody see something I’m missing?

I also tried copying and pasting into a different file (one that I’ve successfully run single-pass cuts on) and the same thing happened. 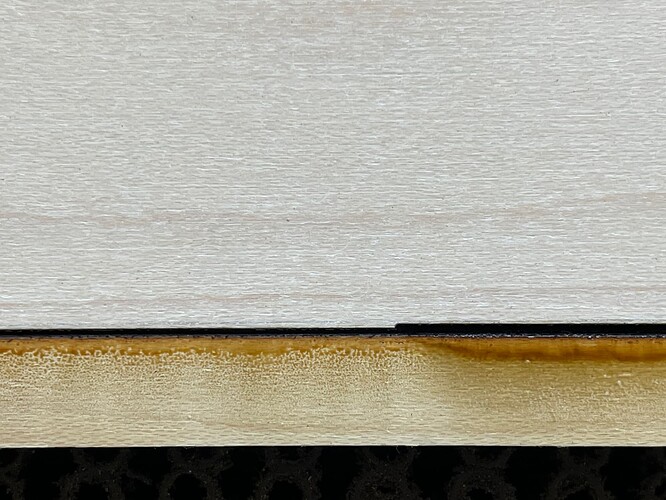 You have a lot of hidden layers in this file.
Open it in your vector software (whatever you are using, I opened it in Illustrator.)
I would start by deleting the hidden stuff and trying again, on a test material (maybe cardboard?) if you don’t want to risk wasting other material. 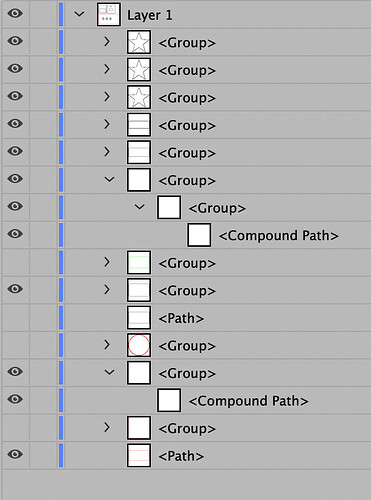 Thanks for the reply! No luck unfortunately. I’m also not sure where those compound paths are coming from, but I ungrouped & uncompounded everything and I’m still not seeing anything that ought to make it repeat the cut.

ok, I see a problem with the layers that still exist, if you go in and move some of the anchors, you’ll see they are duplicated.

It’s cutting twice because each shape has two outlines, and one rectangle actually has three. (Yours is on the left, and it should look like the one on the right that only has a single line.) And the cuts were offset because the lines in the file are a bit messy and not centered. You just need to break the shapes apart in your design program and get rid of all the extra copies.

And FWIW, questions about cutting twice are common here because even though the outline you see looks like it’s a single line (also called a ‘single stroke’), it’s actually just a narrow shape made up of two lines on either side and then filled in. (And you can especially tell that’s the issue because you can see how the outline changes widths on your stars; if it was just a single stroke, that would be impossible.) Here’s a link to other posts about it that might help. 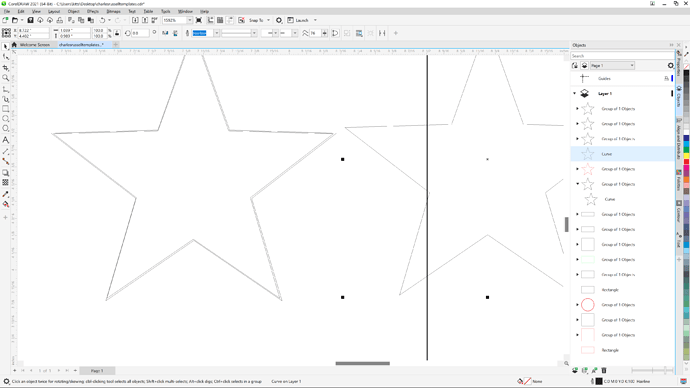 This file should work.

Here’s a hint that something is wrong in the original file.
The lines don’t look consistent. 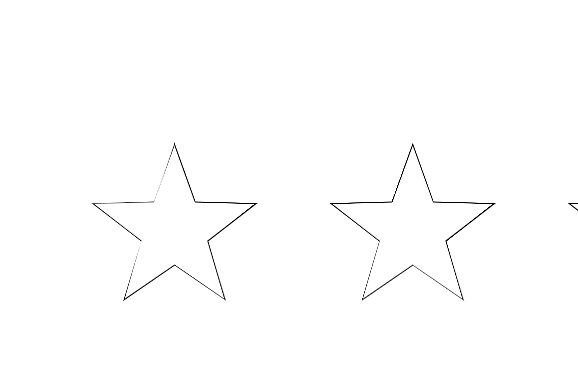 Thanks! I appreciate the help. I feel a little crazy, because in my file I’m just not seeing what you and @trually are. Looks to me like one line (I’ve moved every individual node around, and don’t see duplicates), with no ability to ungroup/release compound path/etc… nothing that would break the shapes apart. 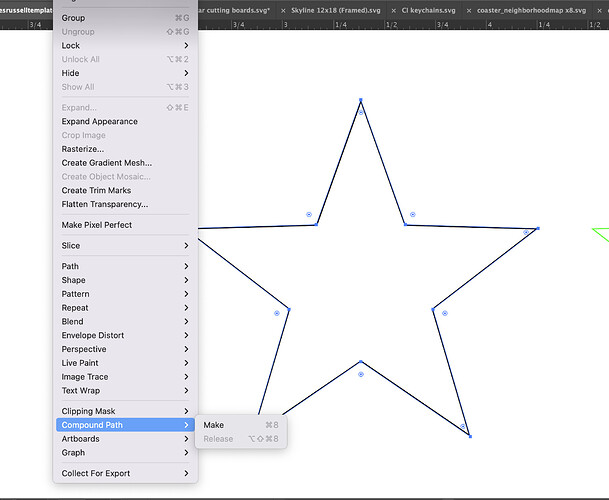 I got it to work by copying into a new file and centering the stroke alignment, it’s bizarre to me that that would be the issue though – I’ve never encountered this in several years of use, and I’m pretty certain I’ve had various stroke alignments in my files. Does the glowforge app automatically expand the stroke into a shape? And if so, is that a new feature or have I just been super oblivious (and lucky

I could find the duplicated lines easily in Illustrator. It doesn’t have anything to do with the Glowforge UI.

Go in and release your compound paths, then you’ll see the duplicates.

Do you have a wireframe view in your design program to get a better look at it? (I was in wireframe for the example I posted where it’s easy to see the two lines.)

It is interesting though, because in the first file example you posted you can clearly see that the stars outlines don’t have a consistent thickness and look a little cattywampus, but this last star you posted looks different. So I know it sounds weird, but maybe try downloading the svg you posted and see if it matches the same file you’re looking at? 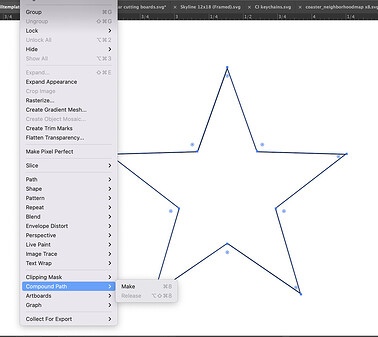 The stars are duplicated. It’s in the original SVG first posted.

(everything is duplicated, in fact)

I opened this in Inkscape and looked at in display mode. As stated above, everything had double lines.

Thanks everyone! The issue was certainly duplicated lines, still a bit of a mystery as to why I wasn’t seeing that in my file – after downloading it from my post per @kittski 's suggestion it showed up very clearly.

I hate when this random weird stuff happens to me, but either way, glad you finally got it figured out!

I’ve had various stroke alignments in my files. Does the glowforge app automatically expand the stroke into a shape?

Yes - anything besides center stroke alignment gets expanded into shapes.

It is common when outline is used on a raster with lots of narrow lines. Some software can recognize the issue and draw a single line down the middle but you have to be specific to do that even then. Most commonly a line is drawn on each side so you might have to zoom in a lot to see that there are two of them.

If when you first open the file you make the lines a minimum thickness(~1 px) and make the fill bright red and not opaque, they ought to stand out pretty clearly. 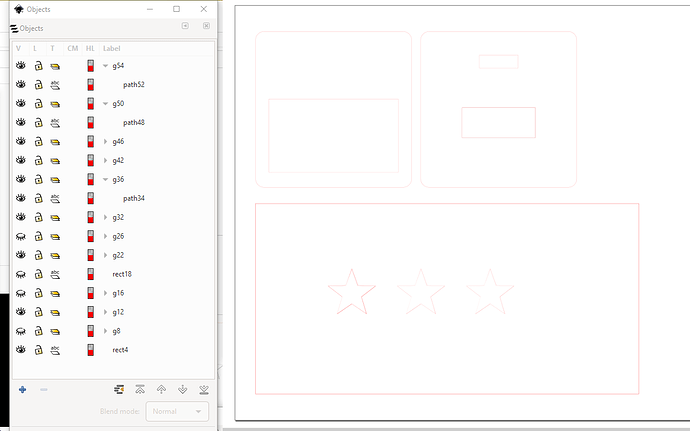 It is hard to see but it is all red as every “line” is a single object made up of two lines combined together with the fill between them bright red. So the objects will need to be first broken apart before you can choose one to erase. If you choose the one opposite the part you wish to keep then the kerf will have it right down the middle in this case