There are magnetic sensors in the lid that require the lower door to be closed before the laser will operate.

Someone might find the answer to this on another forum or FB group if asked. I probably would not discuss defeating the interlocks on this forum.

There isn’t any discussion of defeating any interlocks… just was curious if the lower door could be left open while in use.

There isn’t any discussion of defeating any interlocks… just was curious if the lower door could be left open while in use.

Not without defeating the interlocks.

If you move this to “Beyond the Manual”, someone might be able to help you defeat the interlocks (at least a few owners are take a deep look at the inner workings of their Forges). It certainly adds risk. I am not sure it would be worth it.

Knowing that there are magnetic interlocks in the door ought to be enough. If you can’t figure it out from there it’s probably not something you should do.

It’s not something you ought to be doing in any case. Can you? maybe. Should you? no.

Just tell your friend to get a smaller piece of wood Brandon. Trust me, you’ll get lots of opportunities to do favors for your friends.

It’s not something you ought to be doing in any case.

Why not? If you can figure out how to do it and have the appropriate safety glasses it’s just a big pass-thru. Lots of commercial (non-Cheap Chinese) machines out there that do that.

It’s just a shallow (18" in machine) depth pass-thru. The slot version happens to remove the shallow depth limit by opening up the back.

Well… good news. The wood fits! I never mentioned defeating interlocks! My plan (if the wood was too big) was going to be leaving the small door open. If I couldn’t leave the door open then I was going to let my friend take the piece somewhere else.

The wood is a big thick slice from a tree that was used to hold the cake at a wedding which is why I can’t just use a smaller piece. 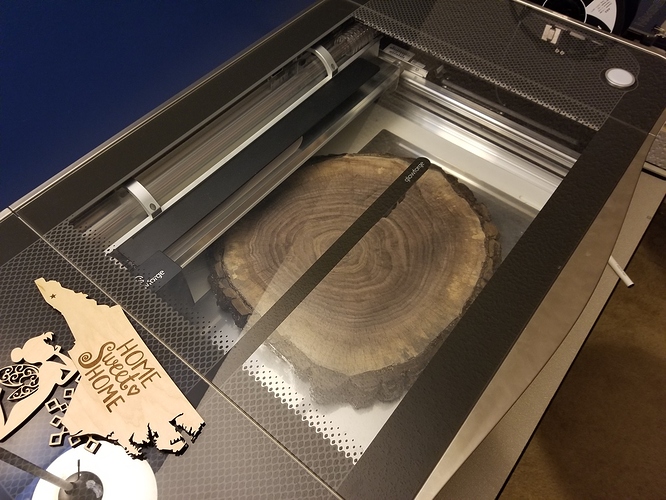 It’s not something you ought to be doing in any case. Can you? maybe. Should you? no.

While I would never tell someone how to override interlocks because that is a “you must be this tall” moment, it is up to the laser safety officer to assure that the unit is operated in a safe manner. I’m the LSO for the lair.

I know you boys like to live dangerously. I worked with one who cut all the fingers off of his left hand on a table saw, because he was in too much of a hurry to lock down the guard on it.

(And he’d done it hundreds of times before, so what’s the harm?)

He slipped.
Don’t be that guy.

(Okay, stepping out of old mamaw mode now. I don’t generally like it much anyway.)

Yup. If you can’t figure it out with hints, you probably shouldn’t be doing it, especially since they are barely hidden.

But that is the thing Jules, and the table saw is a good example. I don’t take unnecessary risk, it is just necessary at times. Some cuts make you remove the reaver. Extra risk for sure but the cut just is not happinin otherwise. Same with a laser, if you have to, you open up, put on your glasses, and engage.

Grrrr. Can’t help it. It’s in my nature to protect. You’re just going to have to put up with it.

We understand and appreciate it… Really.

You’re just going to have to put up with it.

If I had an extra finger for every time I told my wife “Look away. You don’t want to see this if it goes wrong.”

Just be aware of the Dunning-Krueger effect. It’s exactly when you think “no problem” that you have a problem.

If you boys listen as well as my husband does, your wives are in trouble. We really hate to say “I told you so” while waiting in the ER for the doctor to stitch you up.