Will the GF be capable of ACTUAL 3D engraving?

I know the Glowforge is marketed as a “3D Printer,” but after reading through as much literature as I could find I knew before buying that the phrase was being a little misused. My understanding is that the GF is only capable of cutting and one level of engraving. I’d love to be wrong on that.

Then I ran across this article: 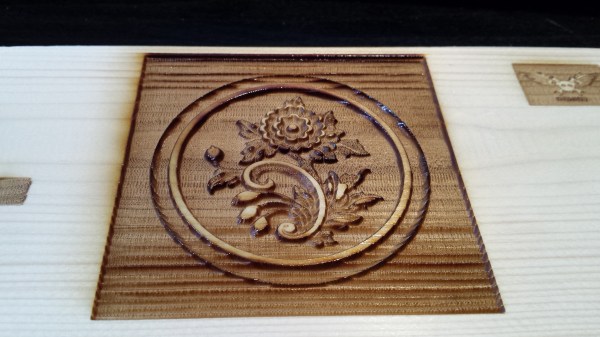 3D Laser Carving With The Smoothieboard

Expensive laser cutters have a 3D engraving mode that varies the laser power as it is etching a design, to create a 3D effect. [Benjamin Alderson] figured this could be replicated on a cheap Chines…

Would 3D Carving be possible on the Glowforge. Even if it was as a later update to the web based software?

I think we’re all holding our breath to see how well the Forge handles grayscale-mapped depth engraving, or 3D carving as you call it. Personally, I have high hopes that the Glowforge team will pull it off!

Here is @dan’s explination of z depth control. I’m also hoping they can get the greyscale function to work. That will make 3d engravings much easier.

The X/Y positional accuracy is 1,000 dpi. It’s hard to describe the z-axis in DPI, which is why we specify power levels, but the laser has z-axis power adjustment of 255 levels, times the number of positions of the lens (which escapes me now but is much more than four). In practice how these combine to achieve z-depth precision depends entirely on the material you’re using. You’ll get more depth precision out of delrin than tissue paper.

I asked Dan essentially the same question before submitting my order. I don’t remember his exact answer but it is something they are working on. As you said in your original question, it may come as part of a later software update.

The SmoothCarve system is opensource. So worst case scenario, you could swap out your GlowForge control board for a SmoothieBoard, and you have 3D engraving at the expense of losing camera control.

But… being as the software is opensource, the team at GF would certainly benefit from looking at how it was implemented in Smoothie, and have a very small hurdle to get over to implement in the Forge.

Last time we discussed greyscale engraving, Dan said it was essentially all implemented, but at that time they still did not have the power supply with variable power control. Now that they DO have those, I am mildly surprised we haven’t seen a 3D engraving out of a Laser Thursday. But I would say they are quite likely to have this feature ready on shipping.

@jacobturner Can you post a link to the thread where they said they have a working variable power supply? That is good news!

I think he was referring to the fact that the transformers have passed testing. (29 days ago)
“Transformers finally passed tests; now dialing in the driver circuit.” That doesn’t mean the power supplies as a whole are ready. Sorry can’t easily link on this tablet.

Not even that level of informed. I was recalling the speculation about images from the CES showing. There had been a few new parts, and I thought I remembered one of them being claimed to be the power supply.

The power supply is a never-ending bundle of joy. It’s working but we’ve still got tweaking to do. Send some warm fuzzies @aeva’s way…

To answer the original question, yes, we will be able to do variable-depth engraving.

To answer the original question, yes, we will be able to do variable-depth engraving.

Dan, you and your team are wizards.

@aeva! You Rock!
Spank those electrons! They are putty in your capable hands.

I do hope @aeva and all the Glowforge team know how much we are all pulling for you at this time. And not just because we want our Glowforges. We want you to succeed because the manner you are all going about this project is just a refreshing experience for so many jaded geeks. Would send you Cheetos and Mountain Dew, or whatever if I knew what your preferred death march victuals are in Seattle.

Would send you Cheetos and Mountain Dew

iyiiiyii…reminds me of the Bundy group standoff at Malheur Refuge in Oregon. All those folks needing sustenance while fending off the FBI. Hope this wasn’t too obscure a reference, as I know I am only one of about 6 people in Oregon waiting for a Glowforge. At least according to the Google map.

At least according to the Google map.

There’s a google map of the locations of everyone expecting a Glowforge?

Edit: NVM I see that it’s a voluntary map. Cool!

Glowforge Map Everything Else

Hey GlowForgers, I started a Google map so GlowForge supporters can share where they are and see where others are too! Edit: I started the map and included my referral link. I would really appreciate if the person who keeps editing my link would stop doing that. I added myself to get the ball rolling.

I think it’s closer to Kombucha and Clif Bars here

Kombucha is delicious, and works wonders for hangovers

I’ll have to remember that…

Missed the neat map of those of us waiting. I’m in Salem, Thank you for pointing this map out.

Wow…very close by. I grew up in Salem and lived there until I got married. Cool that there are kindred spirits nearby.