Windows or Mac, based on what software is available

Hi, I use Macs a little more, but I have Windows 10 machines too (I’m an IT Manager). But I’m wondering is anyone using one or the other with their Glowforge. I would probably always choose to be in a Mac environment, but their hardware lately has really gone downhill (one port?!). I was checking out Artcam and it is Windows only. I was just wondering if any other software packages were being used that aren’t necessarily available on both platforms.

I have an Adobe Creative Cloud license, so I have access to Illustrator. I’ve used Photoshop for 20 years, but the latest version of Illustrator I feel completely lost. If I just want to clean up vectors, is Inkscape better than Illustrator? For just cleaning up paths, Illustrator 2017 feels terrible clunky.

Don’t want to start an OS flame war, but I think we’re all way too mature for that…

If I just want to clean up vectors, is Inkscape better than Illustrator?

I installed Inkscape (mostly in an attempt to help with Inkscape files) and I can’t stand it on my Mac… YMMV. I’ll take Illustrator any day of the week.

Tony - I use both Mac and Windows 10. I only have an old version of Illustrator on my Mac, but I’ve been using Fusion 360 on both platforms I also have Inkscape installed on my Mac, but really don’t like the way it works.

I’ve also used the web based version of Gravit a couple times to move parts of SVG files around, I don’t think I would us it for original design work.

For me as an IT manager it really doesn’t matter what system I’m using, just get the job done using what ever I have available.

By the way @tonybarnhill , how did your trail sighs turn out?

I installed it too, along with X11. I thought it was kind of terrible. I tried the Windows version too, didn’t think too much of it.

Since you two are Mac users, what about other vector software?
Sketchup
Logoist
Affinity Designer

I use Win10 and work, Macs all over our house, and an ancient Dell running the Chromebook OS next to my GF. Go with what you like-- they will all work fine with the GF.

Doesn’t matter to me which one either, just don’t want to waste any time trying to bend one against it’s will when the other does it better. I prefer my Windows hardware, but my Mac software whaaaa, I know I’m whining.

I will check out Gravit - Thanks!

I’m trying to work on the trail signs as we speak! That’s why I’m asking all of these questions. I just received it last Friday and I was in the middle of putting a new roof on the garage so I had to finish that thing first before our rainy season.

I’m meeting with the Trail Council next week on what they will and will not allow for the signs. The current signs are like street signs. Not sure what type of metal, but same as street signs. I would LOVE to do multi-color inlay acrylic for my map. We shall see what they say! thanks for asking.

Since you two are Mac users, what about other vector software?

Sketchup – ok for 3D work, can’t imagine using it for flat vector design, though
Logoist – I’ve never tried this one.
Affinity Designer – I really like this, but Illustrator is better overall (AD lacks autotrace, for instance.

Thanks, same here. Macs everwhere! Do you just use the chromebook for the the glowforge? It’s fine, it doesn’t need more ram for the browser?

If tritto comes up on Wheel of Fortune, you could make bank with a T.

I have both in my lab. I prefer to use a Mac, but for this purpose it makes no difference. If you have Illustrator, it’s probably the best tool for the job and runs the same on both. As does Chrome. As does Fusion 360.

I’d love to come and hike some of the trails with you when the new sighs are completed.

Good luck with the trail council.

Thanks. Here’s my trailmap: 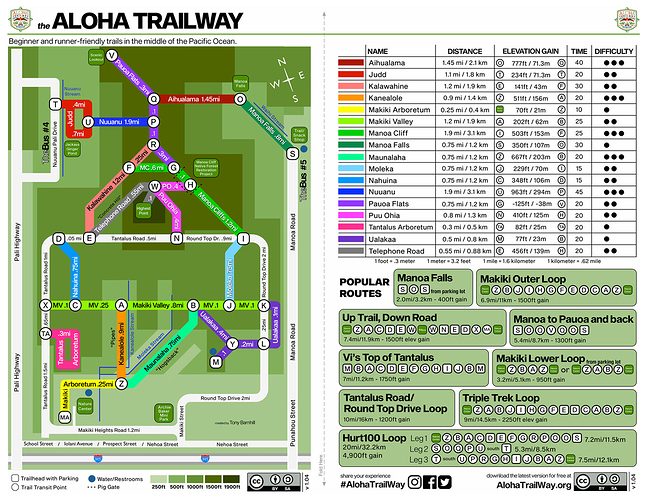 Do you just use the chromebook for the the glowforge? It’s fine, it doesn’t need more ram for the browser?

It’s a really old Dell Studio tower that was upgraded from Win XP to Vista to Pro and then to 10, which killed it (drivers & DLL hell). Just needed a browser in my workshop, so I wiped the HDD and installed Chrome OS from a thumb-drive. It’s all based on Chromium, so the browser works fine with the GFUI.

Btw, while researching Chrome OS, I went to the local Best Buy and loaded up the GFUI on a couple of Chromebooks (Asus & Acer, I think)-- no issues accessing my account, loading previous designs, etc. I reset their demo boxes for them when I was done, of course.

The software I’ve come across in the last few years that works exclusively on one platform is font software. And its bananas expensive. And designed by people who enjoy watching others suffer.

I also use a mac desktop and a Windows laptop, and I use corel on both. And it all seems pretty much the same, regardless of what its running on.

If you have Adobe Creative Cloud then just use Illustrator for 2D stuff. It’s probably the best vector-based illustration program out there. There might be a few things you can do in Inkscape that aren’t as easy to do in Illustrator, but it’s not really worth learning Inkscape if you have Illustrator. Inkscape’s user interface is a bit of a mess and it’s not at all Mac-friendly. If you think Illustrator is clunky then I can promise that you won’t find Inkscape to be any better.

Affinity Designer is super cheap (around $50 I think) and I find it very easy to use. It’s still pretty new, though, so it lacks a lot of features. But I find that it does 90% of what I want to do, so if you really want to try something other than Illustrator it’s worth a shot, especially given the low price tag.

With either Illustrator or AD it’s essentially the same experience on both macOS and Windows. (The same goes for Inkscape, although it’s slightly less clunky on Windows.)

For 3D stuff I’d go with either Fusion360 or OnShape, both of which have free options. Again they’re about the same on macOS or Windows. Fusion360 is somewhat un-Mac-like in some ways, but it works just fine and you get used to it. It’s what I use for all my 3D stuff, although I did make an OnShape account the other day so I can give it a try.

So I’d stick with whatever platform you prefer.

I use desktop Macs, not laptops, so I haven’t had any complaints about hardware. (No shortage of ports on an iMac.) I know some of the MacBook Pros have 4 ports. (All USB Type C, but everything will be using Type C connectors within a few years so I don’t see that as a problem.)

On my Macs I use fusion 360 for the 3D to 2D output in PDF… Works great.
For Vector 2D designs I use Intaglio which is straight forward and does most anything you need.

Regards Inkscape… I tried it and would rather pay for an app that is easier to use and responds faster. I just find Inkscape to be a clumsy app to use even though very capable. Some of these newer apps like Illustrator have so many features that unless you used it forever during its evolution. They sometimes become overwhelming for basic stuff.

I find that exporting in PDF to the GF is easier and less problems than SVG which sometimes do not scale correctly depending on the app and settings.

Adobe CC on Windows 10 here (I’m in an extremely Mac favoring industry, but none of my cohorts get touch screens without hooking up a Cintiq, bwahahahaha!)

Granted I use Illustrator daily but I don’t find it clunky at all for vector cleanup. The Object/Path/Simplify command and Smoothing Pen Tool are among Illustrator’s simplest tools.

I purchased the last Adobe suite before the subscription model CC because I know AI and PS to be superior to inkscape and gimp, but for months I learned on inkscape so it is familiar to me.

Some of these newer apps like Illustrator have so many features

Yes, because it is new to me it’s capability is overwhelming.
Thank goodness for the tutorials!

Thank You all for your thoughtful replies. I’m going to watch some tutorials for Illustrator. I only need to edit paths, but even that seems challenging.

For example, is there an easy way in Illustrator or anything else to draw a cut line around a raster graphic? Or any other graphic for that matter.

I’m not the greatest person to ask - I do manual tracing. (I prefer the accuracy.)

There are ways you can do an Auto-trace in Illustrator (They call it Live Trace) and just use the outside outline, but believe it or not, if you just want to put one cutline around the outside of an image, the Glowforge Trace function is better for it than Illustrator.

(Very accurate and easy to use.)