Not a super productive day today. I did finish up the set of Heroic/Evil coasters. I had a few more problems with the trace function dropping out the middles of the graphics. Support is looking into that. I was able to get around that by importing JPEGs instead of tracing. You can’t get cut lines by doing that, but luckily, all were cut out when I completed the first side of the coaster.

Here are pictures of each side of the finished set. 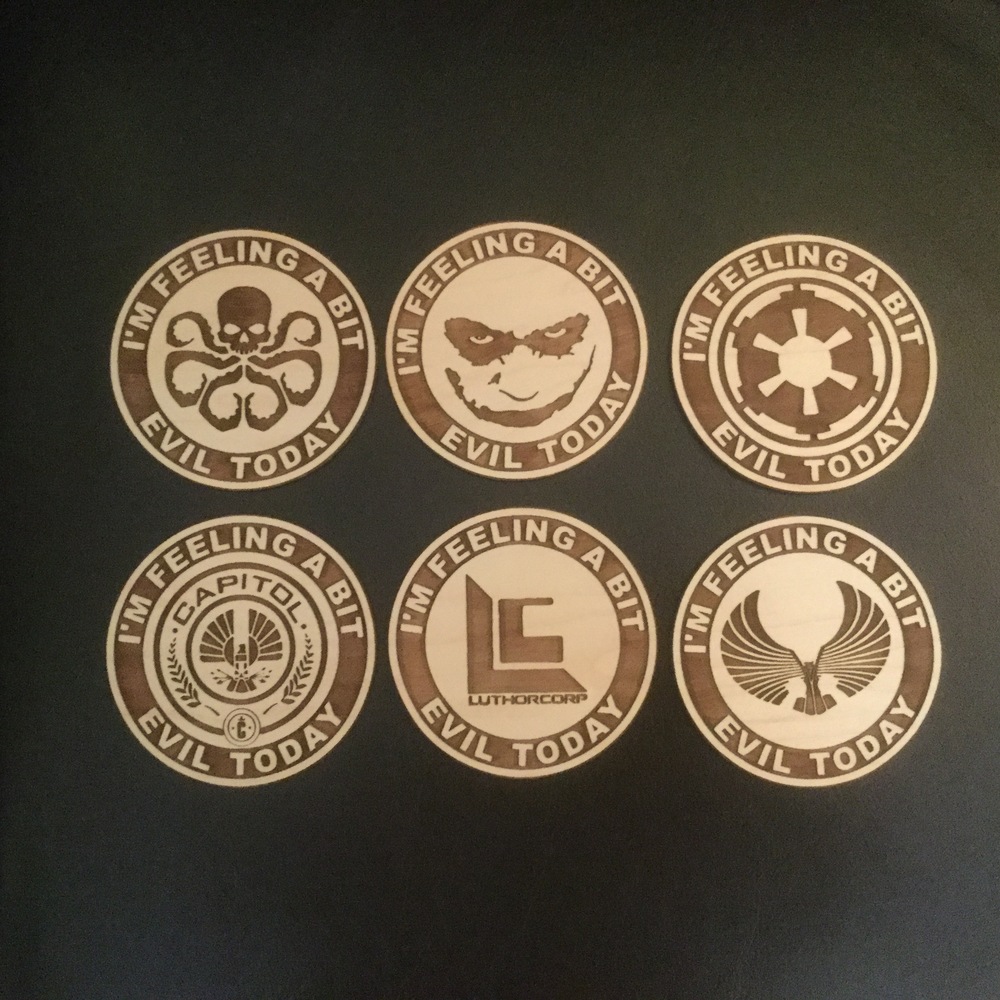 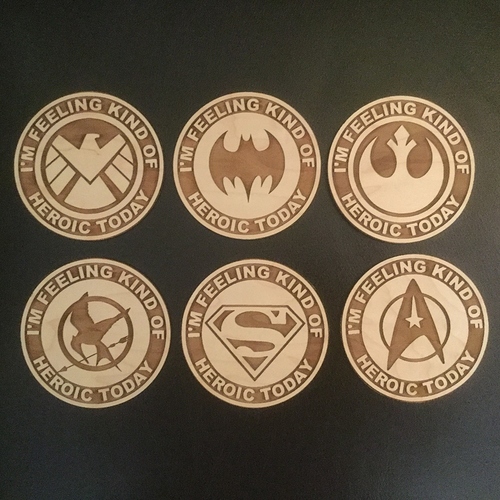 You can hear the

Here’s something a little different. It worked out OK. 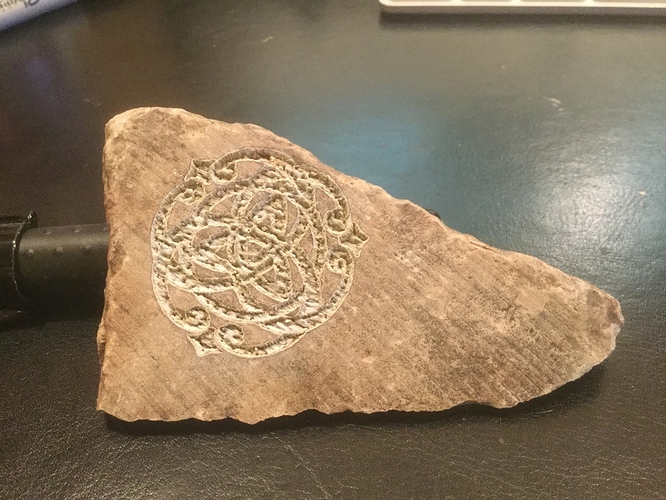 IMG_0498.JPG1154×866 334 KB
This is a piece of flagstone that chipped off of my walkway. The graphic is about 1 1/2 inches around and was cut at a random setting as a test. I set the Engrave Power at 100. 10 Lines per Minute and 125 Lines per Inch. I ran 2 passes on it, but when I peeked in on it, one pass would have been enough. It would have probably given better definition of the graphic, but I wanted to see what depth I could get. It went pretty deep! Time was 45min 53sec, but could have marked it pretty well with one pass in 1/2 the time. 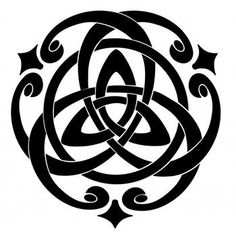 Here’s the original graphic I grabbed off the web. It was a JPEG found by searching Celtic Symbols - Earth. This was also a trace by the

Nice! Now glue it back in place and see who notices it.

Wow! That depth surprises me. I’ma have to 'speriment with some sandstone!

I hate wasting material. Especially when it’s as beautiful and easy to work with as the Proofgrade ply is. You can never have too many snowflakes, so here are some that I cut to see just how small a cut you can do with Proofgrade. 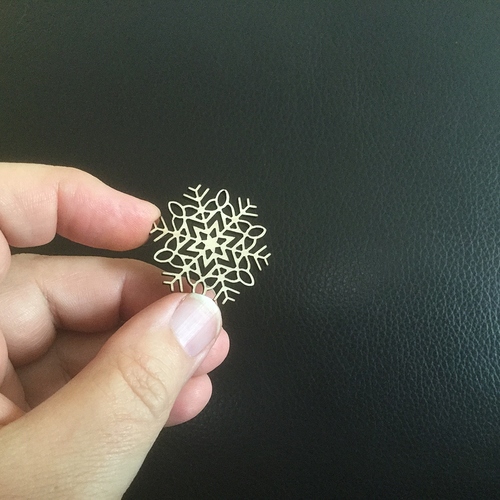 IMG_0505.JPG1000×1000 342 KB
I think this one is about an inch around. I cut a few at once, using standard 1/8" Maple Ply settings. I didn’t take down the time on this cut. Lost one when I tried to go down to less than 1/2". I’m willing to bet that the big box hardware store ply would have absolutely mangled something this small. Highly likely to hit a glue or knot pocket and lose at least part of each piece. 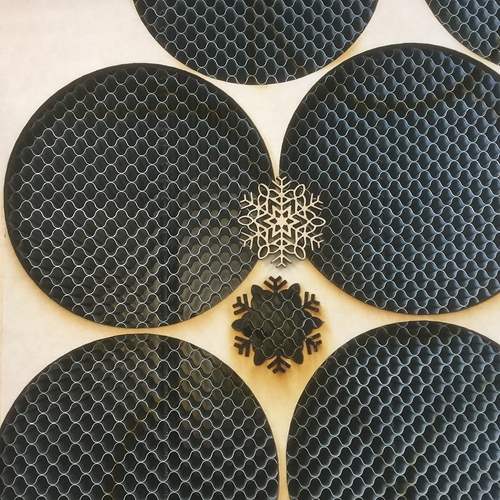 IMG_0507.JPG1000×1000 519 KB
Here’s an example of waste not, want not. It would have been hard to justify breaking off this little piece and keeping it for just the right sized project later on. I have no problem justifying keeping these tiny snowflakes! 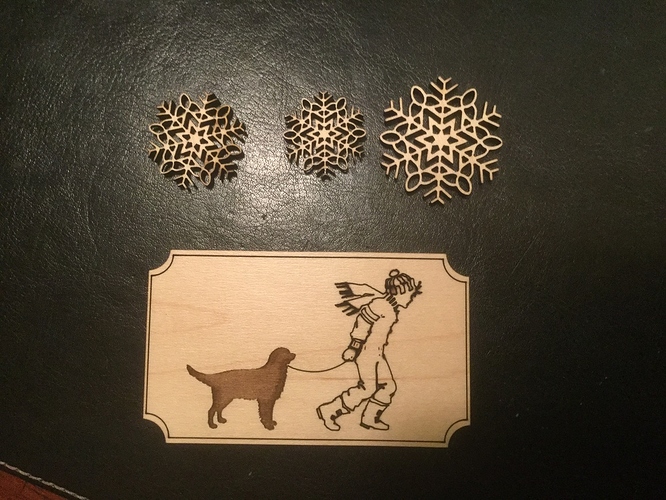 IMG_0508.JPG1154×866 330 KB
Here are some of the “Scrapflakes” I cut, along with a little plaque that I cut to experiment with multiple line colors of an SVG project. The graphic is one that I purchased long ago and tweaked to have the boy walking a Golden Retriever (originally he was pulling a sled). I’ve used variations of this on my Christmas Card envelopes for over 10 years. It’s cool to now be able to laser engrave it.

It is 3 1/4" wide by about 2" tall. It used the standard 1/8 Maple Ply settings for each part of the cut/score/engrave. Most of the outline of the boy is done on the dark score setting. A few parts, like the buckles and collar were separate parts and were set on the darkest engrave setting. The dog was engraved using the medium setting. I think there were LOTS of nodes on the outline of the boy. The back had quite a few pinhole burn marks from the deep score. I’d bring the levels down a bit if doing it again. This was done in two passes. Since the actual graphic was already saved, I just uploaded the SVG, set my preferred scores and engraves and ran it. The score and engrave took 3min and 35sec. I then drew a quick box with cut corners in Affinity Designer and scaled down a copy for the inset score line. The inner line being off was my fault. It was already getting late, so I didn’t bother to tweak it before exporting it to be cut. I placed it, set the cut and score lines for the Proofgrade and 37sec later it popped out. I know I’ll do something on a bigger scale with this graphic.

That’s it for today. I played around with cutting card stock and had some good results cutting larger pieces of heavy card. Need to work on getting it to not move around due to air assist for delicate cuts. I think some extra thought when designing the graphic will help and I’ll be trying that later on.

Nice! Now glue it back in place and see who notices it.

Next step is to pull up a full stone and add something to it. They are about 1 1/2 thick. I didn’t feel like doing the math to set the height for an engrave without the crumb tray in place. Soon.

I did flag stone awhile back…I just etched it enough to discolor it…I liked that better than cutting deep.

Laser etched Flag stone Everything Else

Our local Trail Life Troop (Christian Alternative to Boy Scouts) is building a stair way for awards and such out of local flag stone. I was asked to mark one of the pieces. I think it came out nicely.

Which reminds me…its been a year through snow, ice, lots of rain and blazing hot sun…I need to stop by and see how it has held up…

There’s a lot of pent up productivity spewing forth right now! I love all your projects; you have really come up to speed really fast with this thing.

They look awesome! Nice to know that a jpeg will engrave that well.

I do like the layout and organization of the coaster graphics. They look professional. Excellent use of space and arrangement. Off to think about a collection of twelve images that can be arranged this way. 12 tribes? Twelve apostles. Twelve prophets. The Dirty Dozen. Zodiac. That should cover everyone.

I love the coasters! Were you able to get the back side engrave placed so accurately using the camera or did you use a jig?

Thanks, I appreciate the comment. They were fun to do.

In this case, I cut each one individually and was able to pretty easily and accurately align the flipped over piece using the camera. Zoom on the bed screen capture and the nudge using arrows function is awesome. I will admit that some were a little of on a few of the edges. I’m talking a hair’s width of white showing up. I used a fine tip black sharpie to color that.

Because all of these were done using a trace of the circle, the edges aren’t perfectly round. If you flipped them they wouldn’t drop back in. Because the kerf (cutline) is so tiny, even a bit of a bump keeps it from fitting perfectly. I now have a “blank coaster” SVG file set up. It is just a 4" circle that can be loaded into the project, then you can add any artwork directly from a JPEG, PNG or GIF format and that can be traced and engraved. You’d have a perfect circle that could be cut and flipped over to do the other side. If making them in bulk, I’d do that.

As it was, I wanted to do one at a time to get the quick satisfaction of seeing them finished. Each engrave at medium depth and this quality took about 16 minutes. Of course, if you did a whole sheet of them, the time would increase.

To summarize the answer - Alignment with the camera is working very well. Certainly within any tolerances that I’d ever need.

Alignment with the camera is working very well.

Really nice! As to the snowflakes I have dozens of tiny Escher lizards lying around. Someday I’ll have a tabletop puzzle