Wood Quilt aka a bunch of paths and nodes 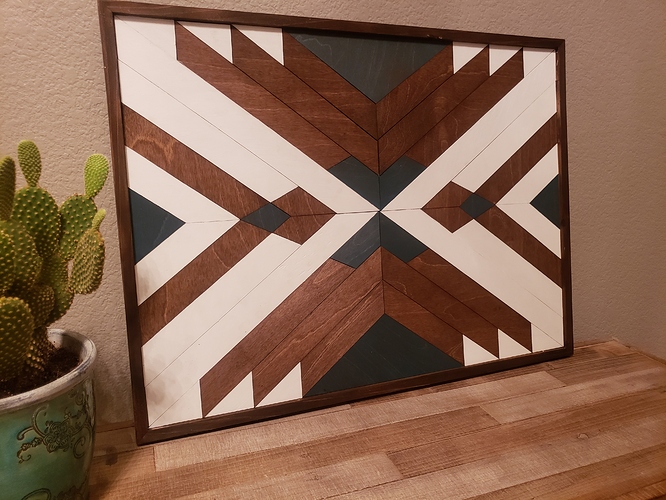 I’m glad I tried my hand at this. You can see right at the center that the peices arent quite aligned which may drive crazy the longer I look at it. But it was definitely helpful in learning the importance of symmetry and duplication features in Inkscape. It took me forever to design this thing but I think that’s only because I’m still learning my way around Inkscape.

I’m getting the hang of Inkscape but I’m debating just going ahead and purchasing Illustrator. I’m wondering if those of you who have used both would recommend one over the other. Obviously Illustrator is not a free program so I assume its has some better features but is it significantly better for Glowforge type designing?

Thinking about it, I’m sure there’s already a topic on this but hey… I’ve already typed this all out

LOL, and there is always someone who will point it out.
I like it

I assume its has some better features

It’s on-par with AI in terms of features. Some pro designers who have access to AI prefer Inkscape.

It all comes down to the interface you find more intuitive.

If you know AI really well, it appears you can do stuff faster in it. If you need to cut a design into parts I’ve seen people do it with a single operation in AI whereas it’s a bunch of repetitive operations in Inkscape. As regards laser cutting, neither AI or Inkscape (or Affinity Designer or CorelDraw) were designed for it. They were meant to make graphics for print and computer; we use them because they can do what we need and we only use 10% of their features. Or is it 5%? IDK, but it’s not much. If you don’t already know AI and you get Inkscape’s UI then I don’t see the value proposition in paying for it.

Nice wall art by the way.

there is always someone who will point it out.

Actually, you can get the job done with either one…the key is just to learn the quirks of whichever program you are using. (It doesn’t get complicated until you start jumping between design programs…they all do the same thing, but slightly different in where they place things.)

Thanks so much! This was really helpful. I did find it weird that I had to do so many steps to cut a design but honestly not a huge issue for me. And I think you’re right with the 5% estimate. For me… probably closer to 2%.

I think I’ll stick with Inkscape for the time being.

I’m an Illustrator girl and I both love it and prefer it but I also use the entire Adobe Suite for work so the cost makes sense.

If you’re looking for an more powerful alternative take a look at Affinity Designer, it costs a lot less and is a one time buy instead of subscription. Some of my colleagues call it an Illustrator killer. (in my field, nobody takes Inkscape seriously, it’s too clunky)

arent quite aligned which may drive crazy the longer I look at it.

When playing with nodes you might find these useful

That’s a perfect way to describe it! “Clunky”. It works and gets the job done for how few of the features I actually use. But yes… very clunky! I’ll look into Affinitu Designer. Thank you!

that would’ve been a game changer for this design! Thank you!!

I have always felt that those who write software are not primary users and their primary customers are folk who don’t have it (ie newcomers) so their programs are much easier to begin but to my mind clunky for the advanced user, especially in the use of decision trees that it takes many clicks to give one command.

Open source is the opposite as it is written primarily by users being more efficient but less obvious for new users. This has changed somewhat in both directions. I got the latest update of Gimp (that you also need to look into for raster editing) and decision trees are creeping in and creeping me out.

By all means get Affinity designer but leave Inkscape installed because Affinity will not implement a feature until they think it is head and shoulders above the rest. This leaves it a program that works exceptionally well for some things but won’t do others at all!
I typically use Affinity for original work but Inkscape for things like tracing rasters.
Any of the broad concepts like the align and distribute above are very simular in both so learn one and you are almost there in the other.

I recently found Gimp really good for this though there are some different issues of stray dots that you have to hold your mouth right to avoid, or search and delete in Inkscape,

You are absolutely right. Everyone should have GIMP installed because it, like Inkscape is very good for being free!

Each project is a learning experience … so, it’s all good.

I really like the quilt! I really need to try one of those. So many projects…

I am an Inkscape baby. I have played with both Illustrator and Infinity Designer, but I always seem to come back. There’s a lot to be said for learning all the tricks in one program. The root problem to me is that vector design itself is inherently complicated and the programs written for it really do not encourage “playing.”

You can see right at the center that the pieces aren’t quite aligned which may drive crazy the longer I look at it.

To add depth to the piece, totally not to cover the oopsie

That’s a great idea!!! Totally going to do that!