Looking for build plans to make this bunny castle. 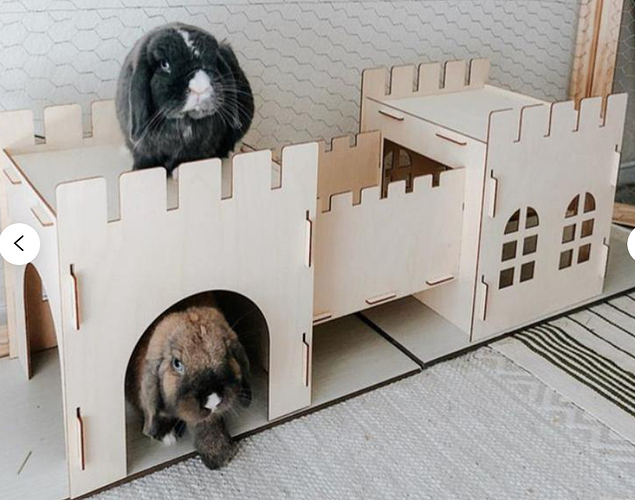 I think your picture didn’t load?

Oh that’s lovely, but not one I’ve seen a design for. I’d suggest doing a search on Etsy for bunny or cat houses/trees and see if you find anything similar.

Where did you see the image?

That being said, it’s fairly simple and you can see how the connectors work - maybe a worthwhile project to try and build yourself!

It is from Etsy, but they are selling the kit already cut. I was being lazy and didn’t want to put the time into the design, but I absolutely can.

That being said, it’s fairly simple and you can see how the connectors work - maybe a worthwhile project to try and build yourself!

That was my second thought when I saw it that the design is right there in the photograph. The first thought was “why would you build a castle out of wooden rabbits?”

Oh, if that’s the case I’d suggest sending a note to the artist and asking if they’d sell the file to you contingent on it being for personal use only. Many are willing to do so

I’m surprised the rabbits haven’t eaten it…I had a rabbit once when I was little (my dad and I were going to the pet shop to buy a turtle and we came out with a bunny)…after it ate a sizable chunk out of the brick wall of our apartment building, my mother released my pet into the wild…I had it for about a week…

That castle photo looks awfully new. Not the first time idea on this forum.

So, our Guinea Pig was in need of a new house, and I was in need of a new project. So I decided to try & make her a new house, inspired by the Feudal Japanese homes (or at least, those I saw when doing a Google Images search :P) [01)%20guinea%20looking%20out] [04)%20corner%20view] The project ended up using 5 sheets of draftboard, but could be reduced to around 3 if you don’t mind a smaller house. The house was made by gluing shogi paper onto the “inner” walls, then gluing the thinner piec…

I’ve seen the guinea pig house. It was cool…but I’ve never had guinea pigs, so I assumed they don’t eat their furniture.

I assumed they don’t eat their furniture.

They are rodents, If rodents don’t chew enough, their teeth grow through their skulls. Not usually a problem as they gnaw on everything. I think that Japanese house was short lived if you look down the thread.

I didn’t know that…I’ve never had rodents, and my aunt only kept a few rodents as snake food. The guinea pig house was a hay feeder too, so I think they knew the house would be eaten…at least the roof.

The definition of rodents involves those four front teeth that grow throughout their lives, or they would starve.

Interesting…I didn’t know. They only thing I knew about rodents was that they supposedly smell differently to animals…I was reading about sugar gliders or something and they were explaining why your cats and dogs wouldn’t try to eat them.

I was reading about sugar gliders

There are several gliding Mammals not related. Only flying squirrels are rodents. Sugar Gliders are Marsupials. I imagine cats would have trouble catching any of them,

Creator of the guinea pig house here! Up until about a month ago, the house was still in service! She chewed up around the door some, but that was all by design. The house was for both shelter and a ever-present chew toy for her teeth. We finally retired it when we bought a newer cage - it came with a nice shelter, so we thought it was time.

I did end up replacing the hay roof with a different one, but only because she liked to rip off all the hay, and leave it on the floor of her cage (where it was rapidly soiled). A traditional hay feeder is much better suited for the task.

Welcome! Glad to have you back! I did not realize It was 2 years ago! Thank you for the update! I can only wonder what other wonders you have come up with in the past few years.

Actually… nothing. I made some ear savers for some friends and family when those patterns came out, but besides that, my Glowforge Pro has been sitting unused. At some point I’ll probably sell it - just not enough time in the day anymore

French lop rabbits. I love them.