Tried my hand at this: 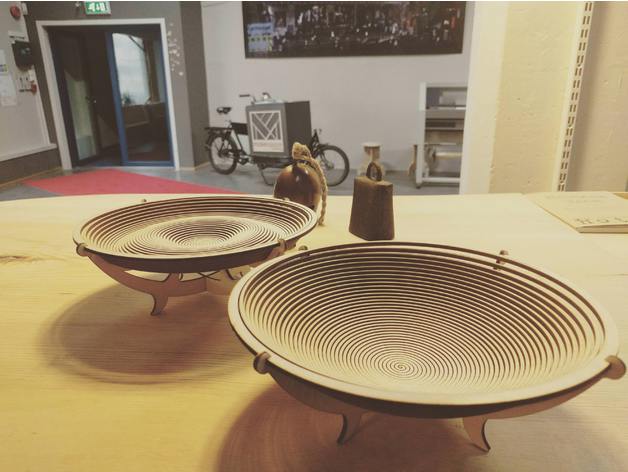 This a set for two different bowls- just delete the frame you don't need. They're designed for 3mm birch plywood, and should be already scaled properly. In case you still need to scale them, the file also includes a 400mm scale vector; that should...

I used proof-grade medium draft board. 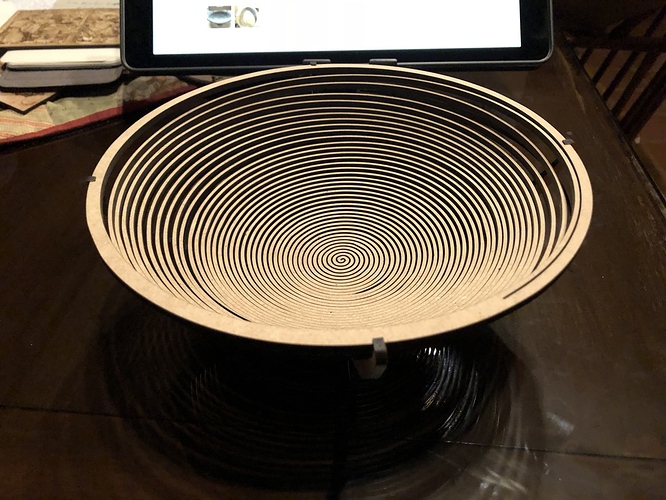 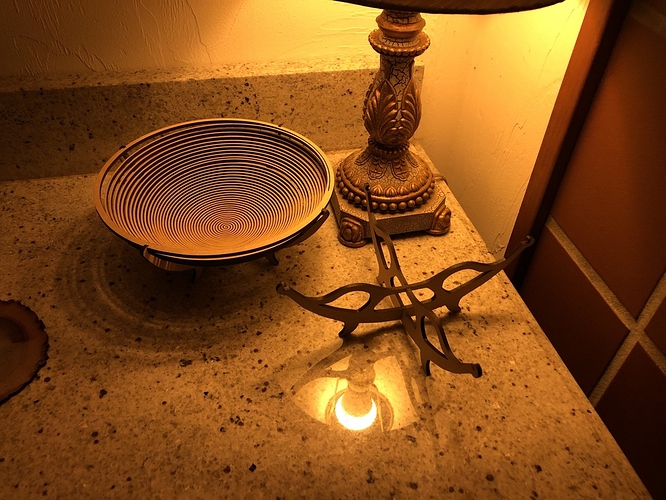 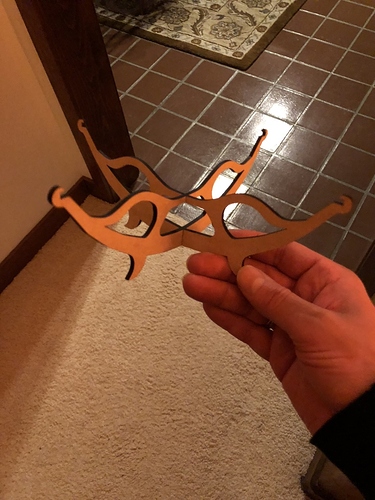 Did you have to adjust the file any?

Yeah, the file is DXF and the Glowforge doesn’t take that, it seems.

So, I found a free app on the Mac App Store called eDrawing, which opened the file and then allowed me to export to JPG. I then brought that into Inkscape and traced it and exported as SVG. The resulting SVG had the bitmap in it, but I just set that to ignore and the lines to cut.

Looks like someone added a SVG version in the comments on Thingiverse.

Ha, I should have looked there first. Ah, well.

Thanks for pointing that out!

Also Inkscape opens dxf and then can be saved to svg.

There are several web-based file converters that will do it, too. Just google “DXF to SVG”

The bowl came out beautifully! What a nice decorating accent.

I SO want to try this.

Made one of these last night - it’s great for holding all of our dice we use for Tenzi! FYI - I brought the DXF into AutoCAD and then sized it appropriately for the cut bed making it as big as I could make it. Kids had fun pulling off the tape on the spiral! 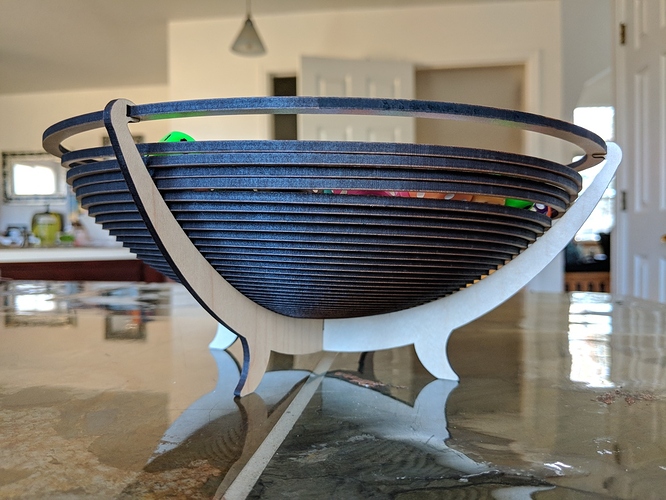 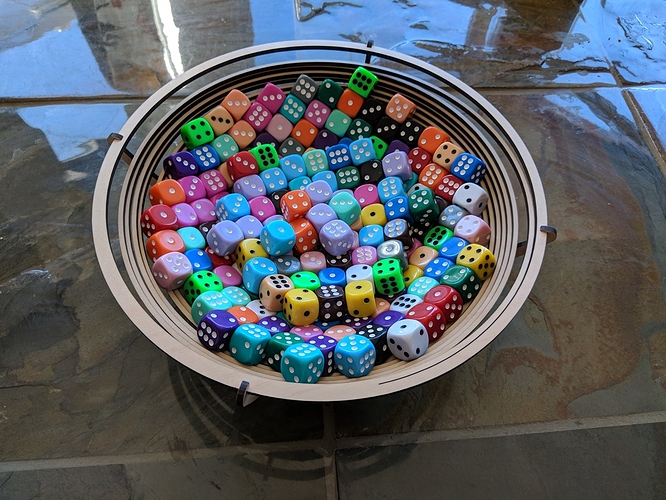 If you make two with one just a bit smaller they should go together and overlap so they are solid all the way down. Particularly interesting with a bowl lathe to make a smooth connection all the way.

PS - used the SVG file from the comments on Thingiverse.

Of course Inkscape doesall sots of spirals natively so one could have spirals in the spirals, or waves, or spiny hamsters or whatever.

But the problem with inexpensive plywood is that it is susceptible to environmental problems --> warping. Overnight I laid the cut bowl out flat in my kitchen with a light weight applied across the surface, but I guess the drastic change in temperature from my garage (low 40s) to room temperature and loosing some of the dampness --> it took on it’s own form!

I suppose Proofgrade would be the best choice.

With that many tight coiled cuts in it, you’ll probably have some of the same warping issues with the proofgrade too… i had done a similar spiral design a couple of months ago, and wound up having to abandon the idea.

I wonder if sealing it would cut down on that?

and wound up having to abandon the idea.

Inadvertent, but I’ll take what I can get!

Like I said Inkscape has a native spiral maker that you could fit a wobble to. Interesting and unexpected it locks the spiral to the original cut line and if the material is thick enough and the bowl shallow enough it will stay together.

I discovered for myself the issues with Home Depot plywood and it took three trys to have this that barely shows the possibilities but I like the overall concept and will incorporate what I have learned. 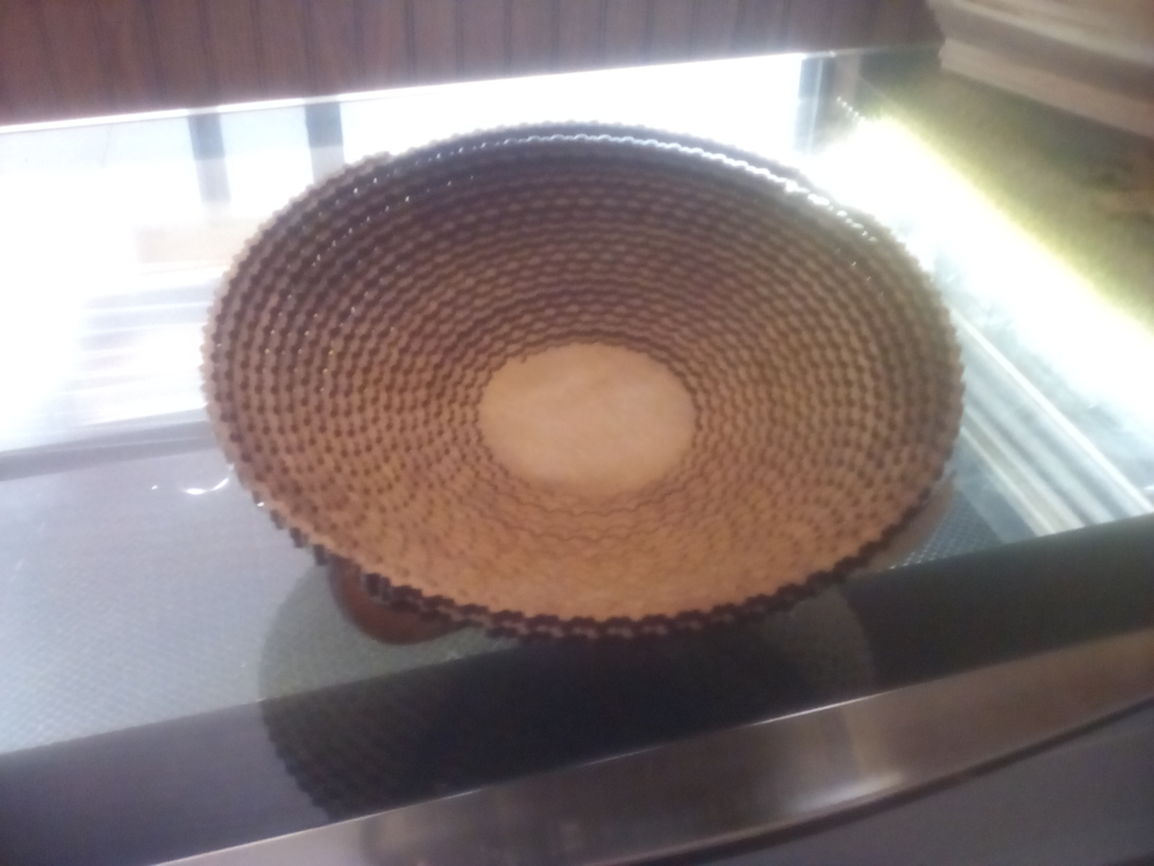