"Wordy": My physical manifestation of the game Wordle 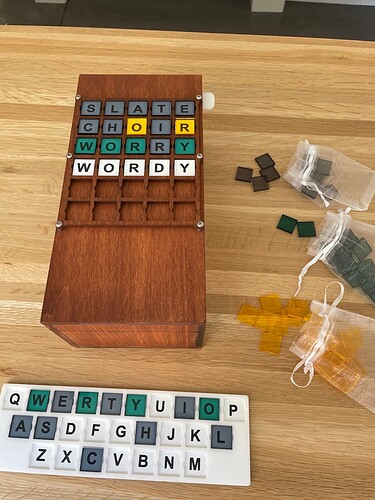 I brought Wordle from the screen to the physical world with the help of my Glowforge. It turns out, the biggest challenge in such a project is letter management: I cut/engraved 180 letters out of white on black acrylic (6 of each letter, plus 2 more for the most used letters, plus 8 writeable blanks). How to organize all of them while keeping the assembly small and easy to manipulate was a puzzler. I settled on three rows of nine characters, each letter stack being constrained on only two diagonal corners. This way, you can use the free corners to retrieve a letter tile. 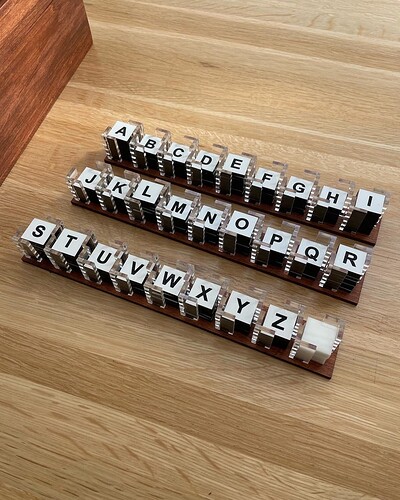 The other tricky bit was a way to indicate by color which letters were incorrect (gray), correct but not in position (yellow), and correct in the correct position (green). I did this using translucent acrylic that I dyed myself. This took a bunch of experimentation, but I settled on the following formula: 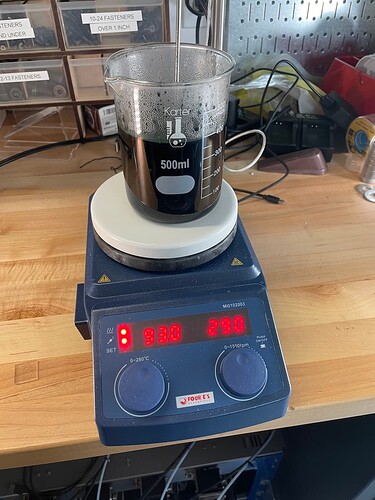 Those who play Wordle know how helpful the keyboard is that keeps track of used letters, so this was also added.

A little innovation was the inclusion of an “answer stick”. The scorer writes the word on this white piece of acrylic with a dry erase marker and puts it in the hidden slot on the right. When the guesser finally gets the word correct, the answer stick is pulled out as a reveal, allowing for a moment of celebration. 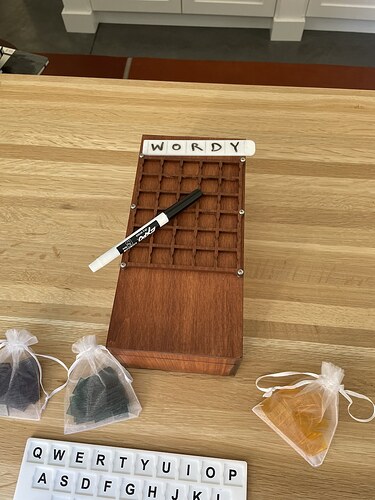 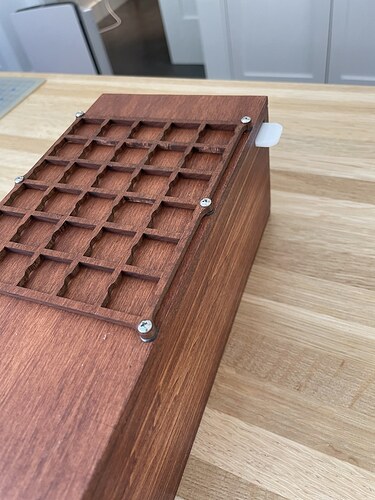 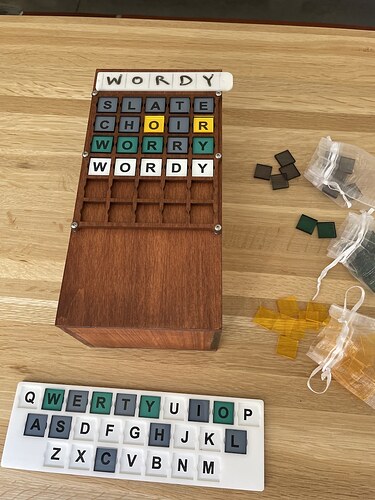 As for the box, it is solid 1/4" basswood stained with Varathane “Gunstock”. I’m not a fan of the tabbed “laser cut” look, so I made a very simple box fastened with 22ga pin-nails and glue. The top fits over an inner lip which protrudes ~1/4" from the bottom. The letter grid on the box top is cut from 1/8" basswood similarly stained. It is raised by the thickness of two very small washers so that letters sink below the top of the grid, allowing for colored tiles to be held when they are laid on top. There are little crescent “ears” on either side of the square cut outs which allow you to use your fingernail or a toothpick to pop-out misplaced letters or tiles. At the end of the game, simply turning the lid and keyboard over is the best way to get the tiles out. 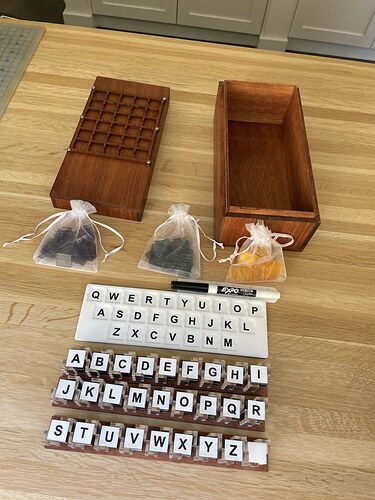 It was a fun project, and my family enjoys playing with it. Some notes for those who might try something similar: The white on black acrylic is horrible to work with. Very stinky and the engraving leaves a dust on the white side (for deepest black and highest resolution, peel the protective tape off the top/white side). The edges come out sticky with a black that will rub off on fingers. I sprayed 91% IPA on a cloth and wiped each edge clean before cleaning the top. I’m not sure this “acrylic” is really acrylic. If I ever make a second one, I’d be tempted to do a light engrave on real white acrylic and fill in the engrave with black nail polish.

This is great. So basically it’s a two player game like mastermind yeah?

It’s so funny that you posted this TODAY. Yesterday I was just thinking about this exact thing.

Not only does it look beautiful and I LOVE it, but thank you so very much for that formula for dying the acrylic. Do you apply the dye with a brush or do you soak the pieces in the mixture when you add the alcohol? I can’t wait to try it!

Nicely done! I have many fond memories of Mastermind, and this definitely feels similar.

The pieces need to be soaked, keeping it just under a boil the whole time. Be sure to stir constantly so that you don’t get splotchy areas. The tiles are tricky to fish out, so you may want to strain them over a glass jar to check for color. Pop them back in for a few minutes if they are too light. The alcohol smell will be very strong: keep everything well ventilated, and of course when working with dyes, wear gloves and cover any surface you don’t want ruined (even tiny splashes can cause accidental coloring).

Great write up and fun project!

Wow this is amazing.

Wonderful, or should it be wordleful!

Where did you source your two-color acrylic? I have my own project for which I was wanting to get some, and my usual local source for plastics (Tap Plastics) doesn’t carry it. It’s also not available in proof-grade from GF. I was thinking of getting a thin sheet and making my own; the thinnest I can get locally is 1/16". I like the nail-polish idea. I might try that instead.

Just in case this is helpful, Rowmark engravable plastic has many two-color products.

I think you can find all their colors on the rowmark website here, too: Rowmark | Color Charts

I was pretty lucky today: 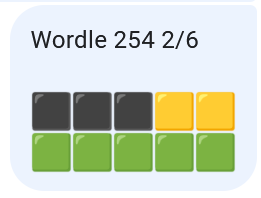 It was a fun project

Came out great. Kudos for sticking with what appears to have turned into a massive amount of work.
Trying new concepts is like a drug to us makers. Keeps you up all night.

That is amazing! I had to call my spouse over to check it out, as he plays the app every morning. The beaker and hot plate to dye the acrylic is a nice idea too. I once did the exact same color, and it was neat to see that the dye was molecularly attached. to the plastic!

I got my white-on-black acrylic from Inventables