Another popular site for boxes.

Okay, first off I’d love to see your harps in the show and tell thread.
Next, and everyone who knows me knows where I am heading, download Fusion360 and use it. Sure a simple tabbed box can be done in an art program but as your stuff gets more complicated the happier you will be that you learned Fusion360.
Just happens that I have an introduction to F360 tutorial here in the forums that uses a tabbed box as the teaching aid.

I see all kinds of tabbed box projects, and everyone makes them look as easy as falling off a log

They’re not quite that easy, but there are a lot of box generator programs out there that folks usually use to get started. You found one of them…you might want to try one or more of the others to see if there is one you like better.

The links to them start at about line 80 on the spreadsheet here, just scroll down:

And PDF files are one of the file types that the Glowforge interface can read. You might be able to just drag and drop it onto the interface.

My favorite site is http://www.festi.info/boxes.py/

You can’t go wrong as long as you enter the right thickness for your material.

Thank you, that is perfect for me as i want to make boxes with internal sections for game token and card storage

though I’ve put the downloaded files in the extensions folder. I

Which Tabbed box maker on Inkscape?

This is how you do customer support Everything Else

[image] Are you using the Tabbed Box Maker? Here is the github page: [Screenshot (15)] There are several box maker extensions and sometimes when I have installed Inkscape, I forget which one is which. I use the millimeters because the imperial one allows only two doesn’t got to three significant digits and you need that for precision in tight fitting. The only time you need to convert is thickness for the focus of lid camera, otherwise there is no need (other than knowing how big a part …

What OS? What version Inkscape? If you have previous version installed of Inkscape and haven’t deleted it and you are using Windows 10, you might double check that you are putting the extension files in the right program location. Long shot but I had that issue.

The above linked topic links to the extension I prefer for Inkscape to keep everything in one program and screen although the festi boxes really work. Get some cardboard and practice on them.

I really need to get that video made. I have one almost ready for making a Kleenex box cover. Here is the topic I have with a good illustration and file to use.

Starting this topic with the goal to investigate Inkscape’s tabbed box maker extension in Laser Tools. To provide some defaults for Proofgrade in using the extension regarding kerf and material thickness. [WIN_20171022_14_34_56_Pro] This is a handy design to have at the ready. I’m still tweaking for Proofgrade plywood and will post in a bit, but at the moment it works fine for .15" standard corrugated cardboard. I use blue masking tape to cover the cardboard. Creates a nice and light box cove…

Wow! Thanks, everyone! I didn’t know that Glowforge could handle .pdf natively. The box makers themselves aren’t the issue for me, but rather how people go about separating the individual patterns for each side to be printed one by one. My wife bakes about 20 different kinds of cookies every year to give as gifts, so I’m looking to make some large, personalized boxes for her - probably at least 10" X 15" X 8" - and the typical exploded layout that the box makers generate won’t fit the Glowforge bed. Plus, some of the pieces as generated are in the wrong orientation to fit on the bed. I just need to find a workflow to go from the generator’s output to individual pieces aligned to fit the bed. Sounds like a fair bit of manipulation will be required after the design is generated.

and the typical exploded layout that the box makers generate won’t fit the Glowforge bed. Plus, some of the pieces as generated are in the wrong orientation to fit on the bed. I just need to find a workflow to go from the generator’s output to individual pieces aligned to fit the bed.

It’s easy in software (like Inkscape or AI or Corel) to take the PDF output and then move the pieces to fit a couple of artboards that are 20x12.

But you can also do it in the GFUI. When you bring in the PDF the objects (as long as there isn’t an overall bounding box) will be individual sides/tops/etc. Those are vectors and you can move & rotate them. If you move one off the bed it’s no longer going to be operated on by the GF so you can move aside the ones that won’t fit, move the others where you want and rotate as necessary. Run your job (as many times as you want to replicate that box) and then move those objects off (or delete them) and move the others that didn’t fit on the first go round back onto the cuttable space. Then repeat the process to get them in position and cut away

Huh. I have not been able to figure out how to rotate in the GFUI. I thought it was just not an available option. The only things I seem to be able to do are resize and move.

how to rotate in the GFUI.

If you click on a vector object you’ll get the bounding box and a lollipop stick on the top like below:

If you hover the mouse cursor on the round dot on the top the cursor will change to the rotate circular arrow. Just click & drag the mouse and it will rotate the object.

If you hit Shift+Left Click then it will rotate in 45 degree increments.

If you want to rotate something though, click on it to select it and drag on the little circle at the top of the lollipop.

Ahhh, you’re too fast for me @jamesdhatch !

Those are rasters and you can move & rotate them.

I think the confusion might be from this typo. I think you meant to say vectors, not rasters.

Yes, that threw me for a bit. I’ve got it now, though. Thanks again, everyone! This year’s cookie presentation will be elevated thanks to you. 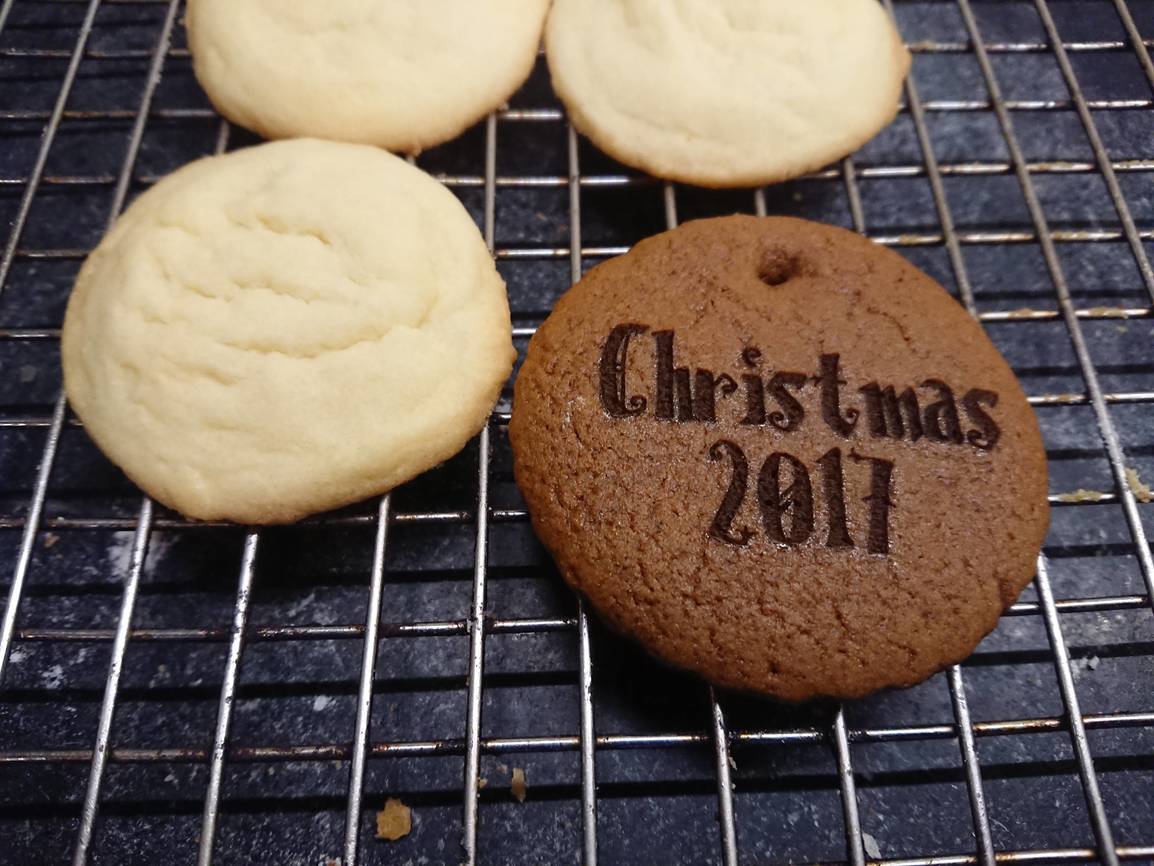 Damn! Wish you hadn’t done that!

I went ahead an uploaded a raw demo of using Inkscape for a tabbed box. Sorry that it is unedited with no pop to it, but it may help you get an understanding of the extension.

If you want to post the dimensions of a cardboard or chipboard box that you might want to make for cookies, I’d be happy to design a box for them. There are also lots of foldable box makers that are on the www and can get you going. There are even a few posted on the community forum.

That is SO helpful! Thank you very much for taking the time to do that. I hadn’t even considered dividers until you mentioned them in the video. (Bonus points for mentioning Ave! Your tissue box is skookum.)

This community is so great.

EDIT: May have spoken too soon (about making boxes, not about the community). I’m not having any luck with the TabbedBoxMaker extension. When I try to apply the settings, I get a dialog box about a syntax error in boxmaker.py [File “Lasercut-box.py”, line 7 ^ SyntaxError: invalid syntax.] Figuring that out is probably beyond my meager coding skills. I’m using Inkscape 0.92.2 64 bit on Windows 10 and the current extension files from GitHub, if that provides any clues. I downloaded the zip file of the plugin, didn’t just copy/paste it from GitHub. I’ve tried installing an older version of Inkscape, an older version of the box maker extension, and reverting from version 3.x of Python to version 2.7x, but no joy.

I use this all the time. The designs typically come out well once you get a sense of tolerance for the materials you use.

Here is some of the work I have done using this site: 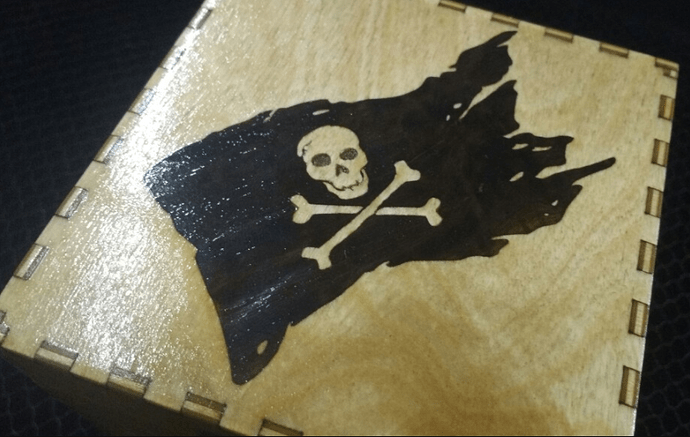 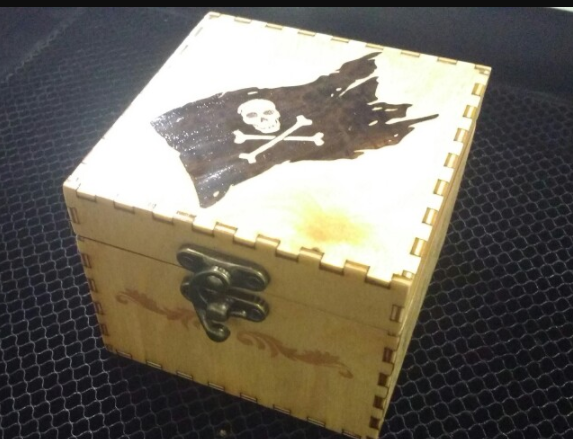 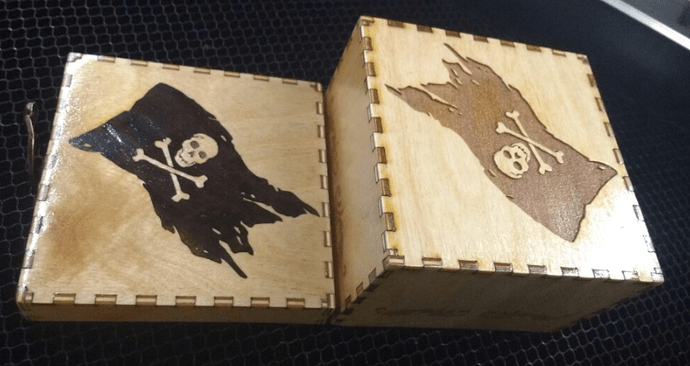 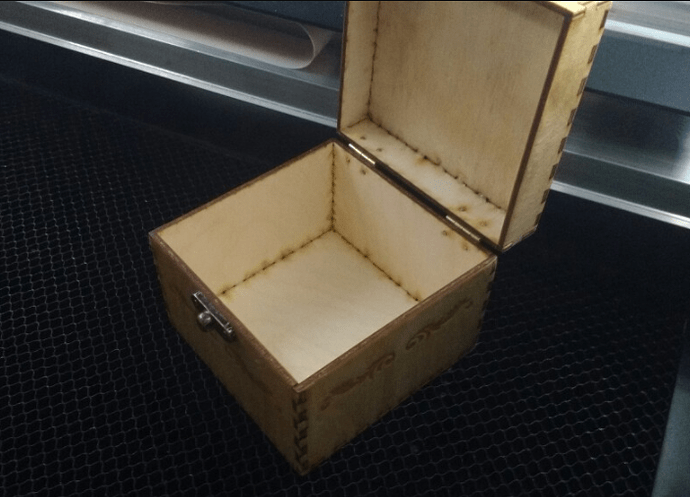 Then I already did a post on the inlay process:

My Experimentation With Inlays Made on a Glowforge

I am not really sure what the line for having this moved. :-/ The general process was that I took a circle svg and an svg of something I thought would be fun, and sized them to what I wanted. I then tried out different settings until I achieved an engraving depth of slightly less than the veneer’s thickness I was using as an inlay. The next step is to make the inlay itself. I converted the engrave to a cut, ignored the circle, and loaded in the veneer I wanted to use as an inlay. I recommend l…

The workflow itself is pretty simple once you have the design.

I’ll think about this. Have you tried it in metric or just inches?

I did have some issues, but am running it on Windows 10 now with latest extension and latest Inkscape.

SHouldn’t be any coding involved, but you are right, getting the environment setup that it relies on can be a pain.

I get the same result if I try either inches or mm. And the same result if I use the older “Lasercutbox” extension. As soon as I click Apply or Live Preview, the dialog box shows up. I’m giving up on that route for now, but I’n not getting anywhere with the online generators that output PDF files, either, because I can’t wrap my head around how to get each component (box side) of the PDF file to be a separate entity that I can manipulate in the GFUI. I’m sure it’s a user issue. This seems like such a simple thing to do but I can’t get it. Back to working on my motion simulator…