So, I was wondering if anyone had sustained any injuries using the GF?

Maybe a couple of guidelines might be smart here: No gory pics please, and maybe blur out any text that is particularly gnarly? Also, I would not suggest posting anything that you think is GF’s fault in any way, because it might impact any dispute resolution you may pursue with them.

In short, use your head and try not to frighten the squeamish

I was assembling a wooden model I cut and somehow the wood slipped and I got what amounted to a nasty baltic birch paper cut. I had no idea the edge could be that sharp.

Oh, and my pride was seriously wounded when i forgot to mirror some text on a rubber stamp engraving.

I thought I had gotten a splinter under a fingernail when I was splitting wood while waiting for an engrave on slate to finish. False alarm.

I almost glued my fingers together. Now I wear disposable gloves while gluing.

The most dangerous aspect of the darn thing is backing away from it and not checking for dogs behind you. To be fair to glowforge, dogs trying to trip me is a major non-glowforge hazard.

I’m usually pretty good at finding a way to injure myself, but so far there’s only been a single close call. My GF is in a closet the former homeowners added on to what was their family room and is now my dark playground (ala the instant gratification monkey).

For whatever reason, the floor of the closet is about 6" higher than the rest of the floor. I have a stool in there to try to remind myself to sit instead of standing while I’m being hypnotized by magical lasers, because my ankles have a factory defect and if I stand up for too long I basically can’t walk the next day.

Although that was balanced out by how well my excellent countertop installation work held up. I originally intended for it to hold my 3D printer, and didn’t want any wobbles or vibration, so that sucker is in there SOLID. The GF never even felt the bump.

Those small off-cuts and bits of acrylic that bounce off the rim of the garbage can, and land in the carpet?

Yeah, they hurt worse than LEGO when your bare feet find them unexpectedly, and the sharper ones cause some good blood loss.

Yup, next thing I know I’d put a brad nail in my finger. Luckily the bone stopped it so it was recoverable without a trip to the ER.

Broke a nail packing up my 2nd GF. Might not be much to y’all but it was my banjo playing finger nail. Had to go visit the Nail salon and the WV women look at me strange when a guy comes in and gets one nail.

comes in and gets one nail.

Lesson learned. Not really glowforge specific but it is getting blamed because it produced the goodies that would not hold themselves together (was not the designer, oh no !!, don’t go there).

Super glued two fingers together. Not an issue since I have acetone close to hand. Problem being that lid is a quarter turn twist then pry open and I had one hand stuck to the other. So sort of a three stooges problem, that thankfully I overcame.
Would have required assistance, however, had I also glued to the design as well.
Makes you ponder things like HOW sound proofed is the workshop…

So like electrical things, attempt to stay one handed when probing at wet glue.

CA glued to the material is the worst for me too - so far. After pulling myself free I had to use a single edged razor blade to remove the skin fingerprint from the work.

i’ve glued myself to more than a few things. somehow i haven’t stabbed myself with an exacto in a while. oh, and i’ve stepped on some small, sharp pieces that ended up in the carpet in my office. but reasonably uneventful beyond the gluing stuff. i’m terrible at that.

Splinter. The pain was excruciating. I had the lawyer on the phone when… I pulled it out.

Does glueing your fingers to a object really count? I’ve come to think of those little skin tags as my DNA maker’s mark.

This machine is so much safer than some of the others. I joined a general laser cutter forum to see what life is like on the other side and it’s amazing how often people post pictures of their burned fingers from test firing the beam alignment with their hands in the way. Or fires. So many fires.

I think the most damage my Glowforge has caused me is to my lungs. I cut a lot of Baltic birch Christmas gifts back to back and eventually had to don a respirator to finish the job.

I’ve repeatedly bruised my ego with design fails. I never seem to learn.

I didn’t think of this you win.

I have to disagree. Nothing hurts worse than LEGO. 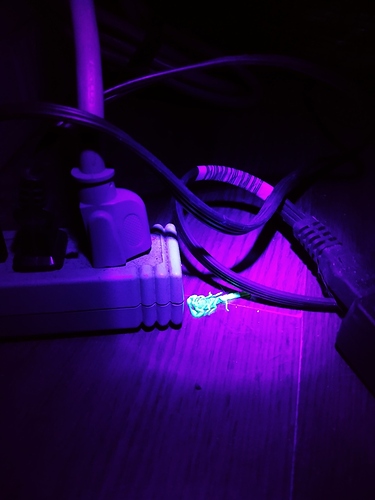 It’s that time of year! I’ve been wondering when one (or more) would climb in through my vent, or vent holder. This one almost made it indoors before the poison got him. 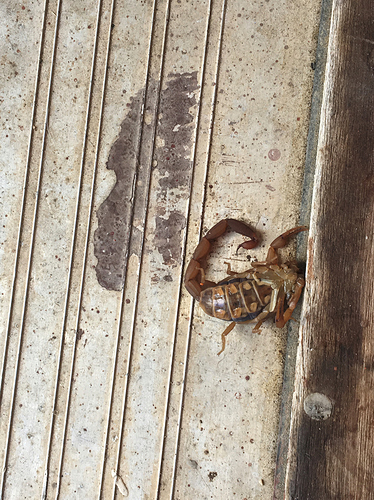 About 15 minutes after I posted that, the pest control guy was at the house and found a black widow spider nest. Now I’m paranoid.

Luckily those are only outdoors…always have to watch for them, luckily the web is pretty specific (very random with sticky and strong strings).