Worth the Marketing Factor?

My husband and I are trying to improve our small side hustle into a real business. One of the things I’ve been looking forward to is making our business cards. What we’ve done prior to our glowforge is to buy 2x2 wood blanks and use a rubber stamp we purchased with our information and logo. Now with the glowforge, I want to really showcase that we have this capability. However, 2 hours for 24 business cards seems a bit excessive…
Right now my settings are 1000/70/195 and they look great but take FOREVER to print.
Is it worth it for the marketing value? Am I doing something wrong? Is there a way to make it go faster by tweaking the settings?

One of the best methods to reduce time is to lower the resolution. You’ve already got that.
I do 1-1/2" tokens for a couple of companies engraved on both sides @ 270 (the lowest resolution that suited me), 62 units to an operation. Almost three hours to engrave one side.
If you want to stand out with a product that has the image incised instead of printed, time is the price.

All a matter of perspective. I’m old school, when things were done by hand, and when you put the tool down things stopped happening. I feel privileged to let my robot do the work while I have a beer.

I’ll bet the cards rock, I know they will stick out.

Would your card artwork work as score instead of engrave? It’s much faster

That’s about what you’re looking at for a full bed engrave.

You could try rasterizing all of it together into one image at a high resolution (600ppi) and then engraving.

You could maybe use the beta speeds with more power, and increased the engrave area with engrave in margin feature under manual settings.

Sometimes on vector stuff, it will come back and fill stuff in randomly, which can add a few minutes… but largely, with a full bed, you’re not going to save a ton of time with any tricks, unless you can manage to score it like @ekla suggested. But if it still needs the engraving and it has to traverse that whole area, scoring isn’t going to save a ton of time, I don’t think.

Reserve the cards, consider them premium marketing material and save them for leads that can bring in more premium projects.

You can also make your own stamps instead of buying them, and that is also a marketable service/product. 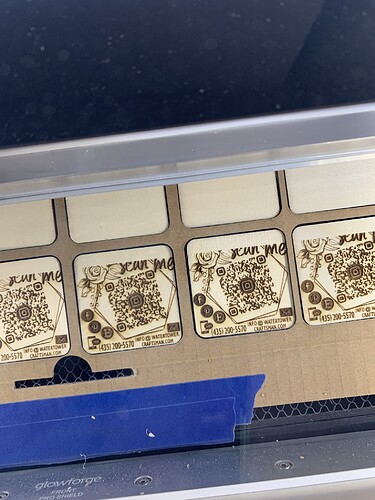 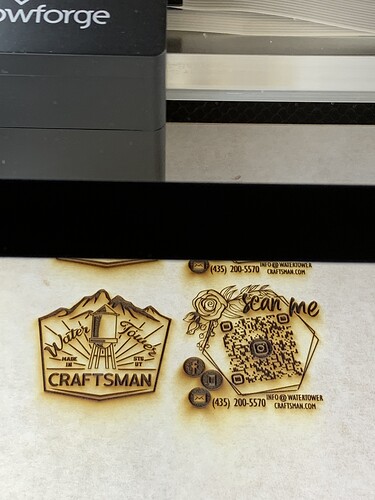 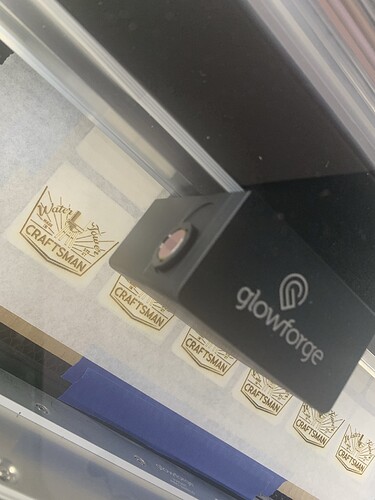 Thanks for all your responses. I just wanted to make sure that the way I was doing it was the most efficient and it sounds like I’m in the ballpark. I love the way they look and I think that once I run out of the precut ones and start making batches that cut out at the same time it’ll feel less involved. Right now I have to make a disposable jig for placing every time and that’s been a little annoying to get the placement right. I did try to score them but there’s just too much detail that it still took three minutes just to do our logo.

We already have a stamp that we’ve been using it’s just nowhere near as cool since our new ones have the QR code and I’m obsessed with that feature. We exclusively hand out our business cards at our farmers market booth so I’m feeling more comfortable with the time it’s been taking. I need to remind myself to switch gears from display and marketing and actually make things to sell once in a while. I spent most of today creating a connect with us sign with our Venmo code and everything. Not as satisfying as making things I hope people will buy, imagine that. Lol

still took three minutes just to do our logo

It takes some experiment and thought, but if you are going to make lot of something it will pay off.
Eliminate any engraving of plain lines and use a defocus score instead.
It may not always be possible to keep the logo as sharp as you would like, but it is certainly worth playing with if you are fixing to make a lot of something.

Here is a fast and dirty example of the one print shown.
Eliminate the straight lines in your image (like those shown below) and make them just vector lines instead.
Switch to Score for these lines with manual focus and double the material thickness (I usually just make it 0.25) for these parts of the logo and engrave the parts still remaining in the original.
Guarantee there will be a time savings. How much depends on percentage of the image that can be set to a defocus score instead of an engrave. 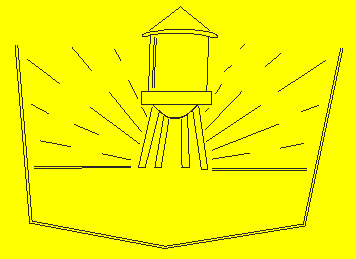 Fun With De-Focused Score - time saver experiment Beyond the Manual

I decided to take some time and experiment with the de-focus score (thickness adjustment) concept. I chose this butterfly design specifically because it took a lot of fiddling to get it to work in a 3 step process. Engrave body, engrave wing, cut design. I was working with it as nodes primarily. Maybe a better way to do it, but it was what I used to finally get it to laser in 3 steps the way I wanted it to. First part of the experiment worked well, in that it took me just a few minutes to mak…

If you didn’t know, you can make your own stamp now too!

What I would do is to make a jig, cut out the water tower (super complex interior cut), then use another jig to align the stamp and stamp the text around the cutout water tower. That would take a minute or two each.

Or if you are making them double sided, cut the mountain shape and the water tower out, stamp the text, sun burst, and mountain shading, then engrave contact info on the back. Although you didn’t ask, my opinion is that you are overwhelming your customer with contact options, and QR codes are cool but nearly nobody uses them. Just put your Instagram and FaceBook pages on the back, since those show your work and should have links back to store site on them.

I know you’re loving your QR code, but if you’re handing out the business card, a QR code seems like overkill. QR codes are good for signage in a booth, etc., where people are on the go and may not remember a URL later. Most people still have no idea how to use them and will just look up your URL so you could save time by making the design a bit less busy, dropping the code, and scoring all the text. You can also remove things like the Facebook, Pinterest, and Etsy logos since they don’t seem to serve a purpose and will add to the engrave time.Two cents.

So far, just having the QR has been a conversation starter. People see it and ask if it really works, which it does. And they’re impressed by the level of detail we can achieve. I think I’ll keep it for now but your remarks are noted.

Glad it’s working out. I was just trying to cut down your laser time, but it seems like maybe it’s worthwhile for you.