I decided to take some time and experiment with the de-focus score (thickness adjustment) concept.
I chose this butterfly design specifically because it took a lot of fiddling to get it to work in a 3 step process. Engrave body, engrave wing, cut design.
I was working with it as nodes primarily. Maybe a better way to do it, but it was what I used to finally get it to laser in 3 steps the way I wanted it to.

First part of the experiment worked well, in that it took me just a few minutes to make the design as lines, and I could have penciled one and scanned it into a file without spending a lot of time on it also.
Design time isn’t that important to me, but can be a real deal breaker if doing this stuff for profit.

Then came the bonus.
Laser time for one butterfly engrave design cut out went from 3 minutes 10 seconds to 1 minute 20 seconds when I used a de-focused score.
Doesn’t seem like a lot, but this is a rather small thing (1 inch). Imagine a very large complex engrave (or many), and you can see where the savings are with the machine cut times (where the real costs are over time).

This was done rather fast, and I can see where I should clean up the image if I really want to do it this way. I did not spend a lot of time making curves and such, since it was just an experiment.

The point was made though. It CAN save design time AND machine usage time if you experiment a little and develop some working guidelines to steer you in future endeavors.

Right side did not work like I intended first time so lowered thickness.
Final Score was still done in 3 steps. Body and wings Score (300/15) instead of engrave using a 0.3 thickness for the body and a 0.15 for the wings (instead of the required 0.060) and taking 1 minute 20 seconds to complete.

Interesting experiment and something to keep in mind if I do a large complex ‘engrave’ in the future. 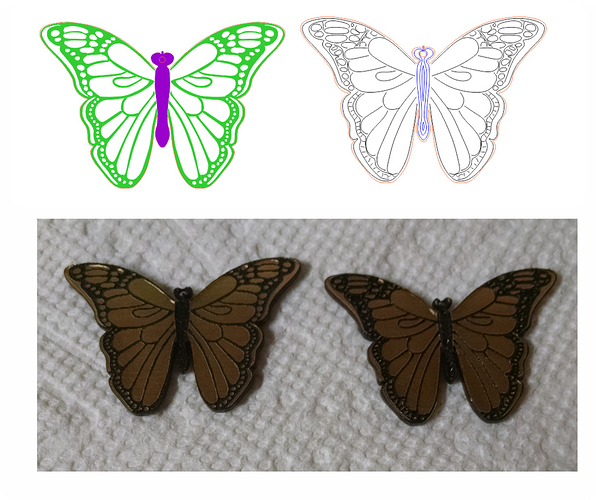 final-Images.jpg1092×915 314 KB
31 Likes
Playing with defocus
Testing focus, or what's 'autofocus' for?
The glowforge camera makes us more concerned about material thickness and focus than we need to be
Engraving is time consuming as it scans back and forth
Engraving a dish or tray
Etch or Score - Can I adjust line thickness?
Worth the Marketing Factor?
What is the smallest size font we can print?
Multiple score vs engrave
Scoring 1/16 acrylic from Johnson’s Plastics Plus
Use cut command on low power to etch
Help me reduce the time?
cynd11 May 17, 2018, 12:30pm #2

Yes, I’ve done that on acrylic, and for relatively thin engrave lines it’s a great solution.