Yet Another Venting Question

Thrilled to have gotten my Golden Ticket email yesterday (2/23/18), for a Basic + Filter purchase from 5/21/16, and will be setting the yet-to-be-named 'Forge in my basement office with an Egress Window.

Good news is the 'Forge will be positioned right next to the Egress window, and my plan is to find a second slider window pane that will (temporarily) replace the “normal” one. I plan on having the slider re-glazed with Lexan, with a round cut for a Mag-Vent attachment, with a short (probably 1-2 ft) flexible hose from the 'Forge to the window, and then using a ~ smooth metal dryer vent pipe ( 6 ft) up to the window well top, with a Dryer Vent “screen” for pest avoidance, and a flap door to prevent moisture from entering back to the forge. There will likely need to be one or two elbows (since the office is in the basement) to get the venting to ground level, and ideally out the side of the window well enclosure.

Since Dan & Co. can’t make recommendations on safety, etc., does this arrangement seem OK without a boost fan, or will that likely be required?

My concern is the length given the 1 (or 2) 90 degree elbows that will likely be required.

Just looking for thoughts / input from the group here. Also, would it be better (less restrictive to airflow) to use a Tee Joint rather than a 90 degree elbow, and just cap off the other end, or would that be worse than the Tee joints?

I’ll be happy to share pictures on the final venting arrangement when done.

I think Glowforge says that the fan will deliver sufficient airflow as long as the run is under six feet with no more than 2 90 degree bends using the included flexible vent hose. If they’re right, it sounds like you’re pretty close to being fine. You’ll probably get a bit of extra back pressure due to the “screen” and the flap depending on how hard it is to hold open.

In your shoes, I think I’d probably try it without the booster and then if it seems like I’m not getting enough flow, add the booster.

That’s what I was hoping for, especially since I’ll be using something “smoother” than the included hose for the most part.

You’re definitely going above and beyond on engineering here, but if rapid setup and breakdown is important the mag release will probably pay you back.

The louvered dryer vents tend to be plenty to keep out critters and weather, but you may have persistent weather, persistent critters, or both

Overall it sounds like you’ve got a solid plan, way beyond my garden variety foil dryer hose and plastic louvers. Take before and afters and post em up!

I’ve been venting through an egress window for almost a year. One potential “gotcha” can be how well the window frame is sealed. I use 2" weatherstrip tape around the frame to keep the odor at bay. Best of luck!

@dwardio, have you done ventine pipe / tubing from the window to above ground, or are you just venting out into the egress window area?

I’ve got a booster fan and wished I had gotten a bigger one. My GF reaches to a 4" dryer vent with the enclosed hose. The boost helps move the smell out after the cut is done.

@evansd2, Living in the Chicago area, weather is a pretty consistent issue, and I want to be especially careful with the 'Forge. I’m also a bit hyper-sensitive to the “pest” issue because we very recently had an issue with agressiive squirrel(s). (At least) one of them apparently thinks that Christmas Lights (or the wire on net lights) are vines and repeatedly chewed up our exterior lighting on our shrubs. Then, with a recent heavy snow, apparently chewed into our attic and we got to hear him running all about in the attic.

Luckily, we called the “Critter Detectives” who set a trap on the roof, and last Sunday as we were returning from church, saw that indeed the squirrel was in the trap, but that wasn’t the excitement: a Red Tailed Hawk thought that Mr. Squirrel was LUNCH - boxed and everything in the trap.

I managed to get a number of great pictures of said Hawk and Squirrel, at least one of which will likely be burned into some proofgrade wood as I experiment with the forge.

This is probably my favority picture - especially seeing the fear of the squirrel, and the extreme attention of the Hawk.

The hawk actually manager to pull three of the four screw anchors holding the cage to the roof, and nearly flew off with the squirrel and the cage. 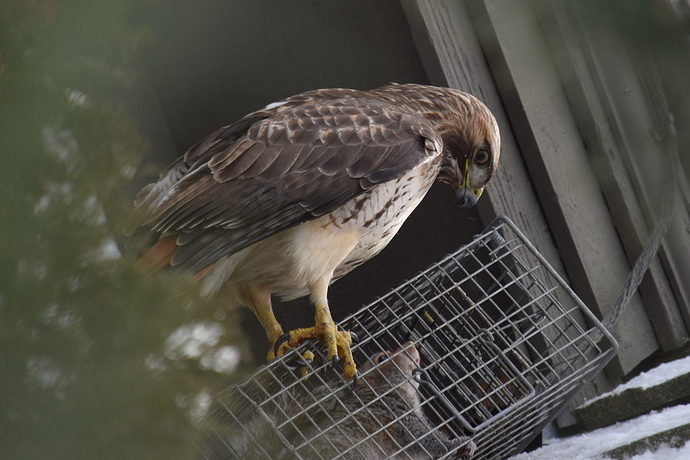 Here’s one of the more magestic ones of the hawk 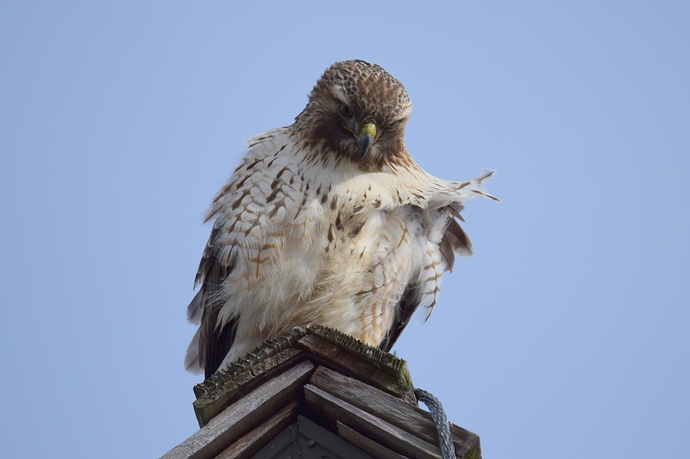 I hear you about Chicago weather, no joke up there. Were you on the forums much this winter? There were a ton of threads about temperature concerns through December and January, some good ideas and info in there.

I’ve been reading, but not much / any posting. We bought a new (to us) home this past summer, and it has taken any / all free time I’ve had. While the production delays have been disappointing, the timing has actuall worked out well for me. Now, I’m just trying to get everything ready for when UPS actually shows up with the unit.

I’ve been trying to think of a good name, and had an idea last night, but it may be even too “punny” for me ( I’ve never met / heard / said a pun I didn;t like…) I was considering naming my unit
"Geordi La" (with a not so subtle reference to Star Trek TNG)

The weather is actually one of the main reasons I ordered the Magna Vent months ago, and have been waiting on the Forge to arrive for it. I know I’ll be able to easily connect it to the exterior venting only when “printing”, and seal up the venting with a magnetic cover when the Forge is not in use.

I just vent into the window well. Pretty constant winds here in Colorado, so haven’t worried about piping up and out.

I’m in NW suburbs (IL) and vented trough the roof on single story ranch. Used 6" vent pipe think furnace stack. Then reduced to 4" ducting with two 90 degree bends and used all of the dryer vent as a temp solution. All total around 20ft. Thinking I needed to add a booster fan. But I get a small natural draft. That along with the fan seems to be more than enough. The only smells are from the actual charred or melted pieces after being cut. I did tape as much as possible all straight connections and seams. Left the elbow joints unsealed for when I finalize set up but those are in the attic and have not noticed any smell/fume issues.

For your setup my only concern is your windows around and above your egress window and neighbors with the smell/fumes being able to come back in when possibly open in the warmer weather. When outside I would consider running pvc pipe as high as possible to get fumes away from yours or your neighbors Windows/doors specially as how close bungalows tend to be to each other in Chicago. Might not be the most appealing choice but definitely the safest.

FYI I have seen people use pvc connector to downspout piping to disguise the venting of radon so the might be an option for you. But you’re on the right track.

As far as the squirrels go use hot sauce like Dave’s Insanity sauce diluted in water and spray on anything you want them not to eat. Just remember what you sprayed and remember to use gloves or if possible wash it before handling it. I had a pita one that chewed though 3 car wiring harnesses. 2 no big deal splice back together the other took forever to fix as the dealer wanted to replace the whole harness. To this day I have to wear gloves whenever handling under the hood of those cars.

I’m actually in the western suburbs, and our windows are rarely open. Egress window comes up around shrubs, and in a corner of our home. Venting wont be visible at the ground level, but I can’t go much above ground. Egress window well also has a cover, and I’m going to be building an extension around the well so venting runs out of extension. We’re also on a corner, so we have quite a good distance to the neightbors. I really appreciate the Squirrel advice. I do, however, think that between the “Critter Detectives” and the Hawk, our squirrel problem seems to have been minimized for the time being.

I’d be concerned a bit about a vertically oriented vent, be careful there’s no way for rain and snow to come down and get into your GF. Gravity isn’t your friend here.

Fear not! the vent will turn horizontal, and will have an overhang and protective vent cover. Here’s a simple mock-up. (please excuse the relative poor execution of the design from PowerPoint.) 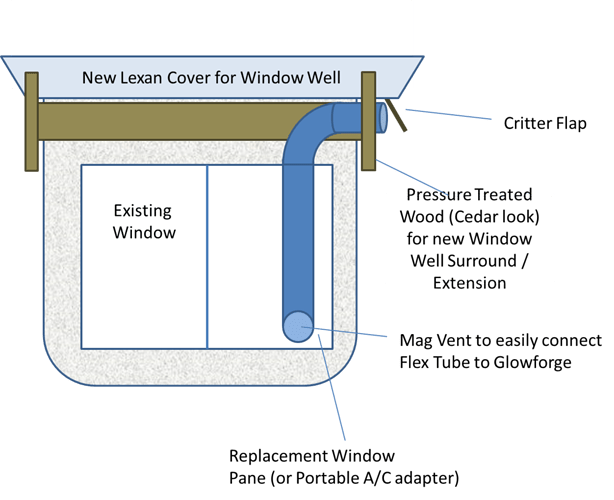 I’d say get the booster fan… I have mine on the second floor, straight out a window less than 9" hose extended, everything is sealed off and I still smell fumes all the time, I’ve even sealed the scraps in case its from the burnt edges… While I do enjoy the wood fireplace smell, extruded acrylic was awful.

I really wish there’s an option on the app interface to just turn on the fan within the machine.