I haven’t done much work with leather, but I was inspired (a while ago) by @jbmanning5 when he made the collar for Rio… I had gotten as far as ordering a buckle, some veg tanned belt leather, and a bare-bones leather working kit from amazon before getting distracted by other projects.

Last week at the dog park someone walked up and handed me Zelda’s old quick-release collar…again. She likes to roughhouse with an extremely frisky bully named Whiskey, who often manages to trigger the clasp as he chews on her scruff. (Thats right: too much Whisky =Zelda running around naked in the park 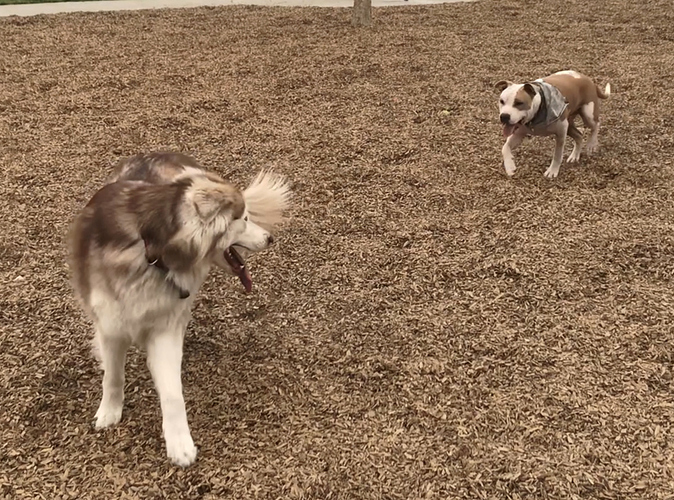 Anyhow, it was time for a new collar. It is not as pretty and finished as Rio’s , but I’m pleased enough with the result for now, and I learned a bunch. v2 is in the works, but probably won’t happen for a while. 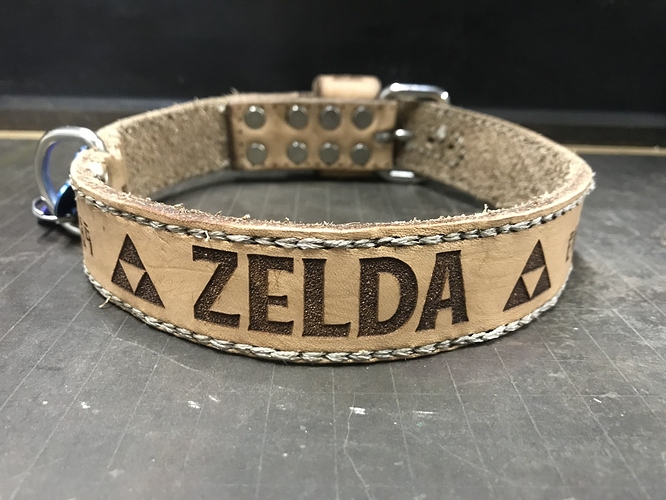 The leather is unfinished, the edges are not burnished, and the stitching (which took far, far longer than entire design-cut-engrave process) is inconsistent. It’s gonna get chewed on anyway, so… meh. 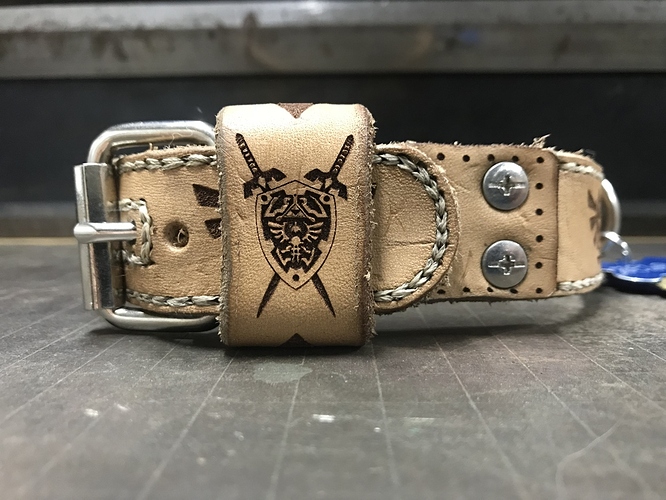 Zelda was being her usual uncooperative self when I tried to get pictures, and of course her fur covers the entire collar in most positions. 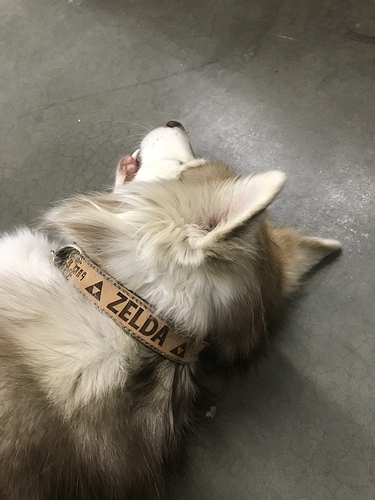 She rolls over every time I try to adjust the collar for a photo. 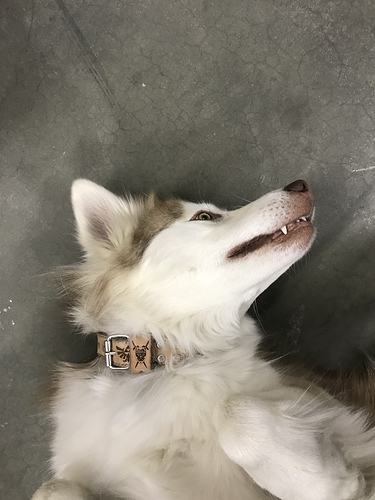 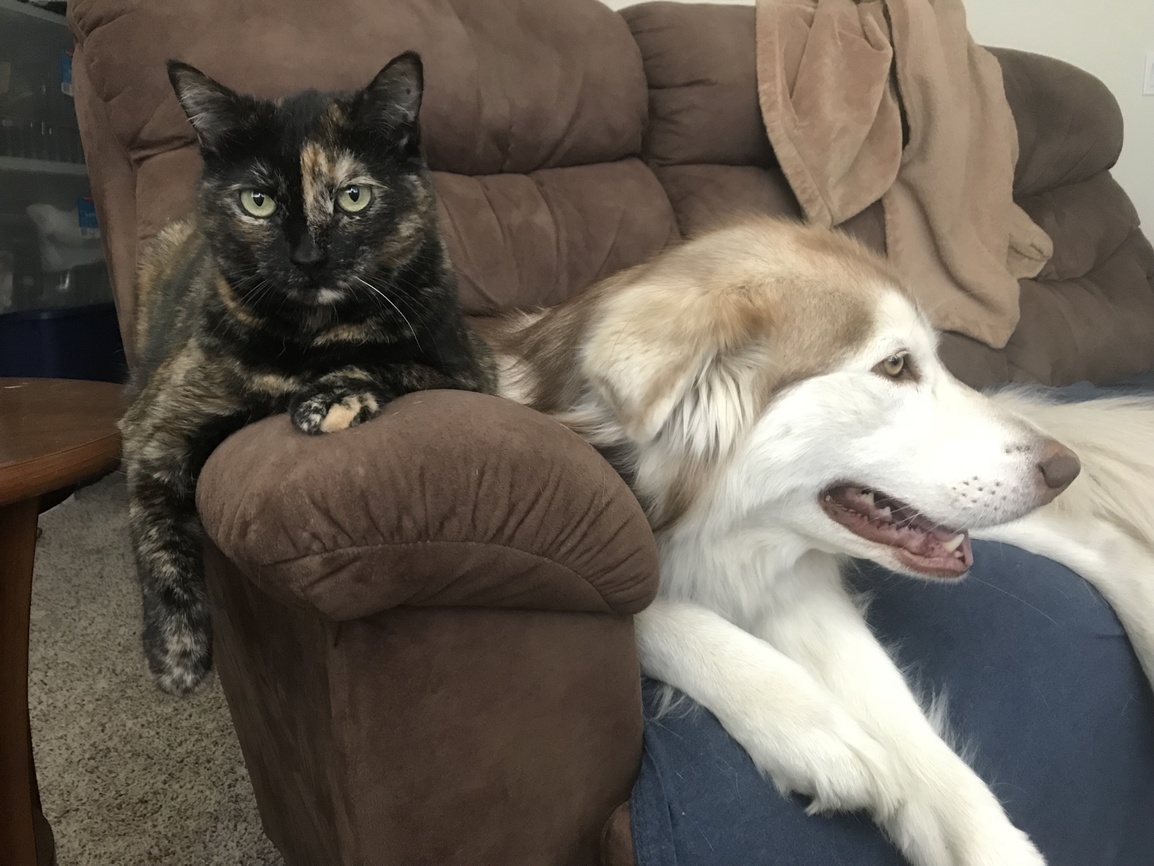 and the stitching (which took far, far longer than entire design-cut-engrave process)

This… one of those things you get about halfway into and think to yourself, “WHAT was I thinking - the stitching isn’t even functional!”

I like the ruff look too! I cheated by going with latigo leather (already dyed). The pictures made mine look better than it is

I’ll have to figure out V2 soon also. He’s on the last buckle hole for this one.

It looks great! (And you can’t go wrong with furbaby pics.)

think to yourself, “WHAT was I thinking - the stitching isn’t even functional!”

Zelda needs a fairly large collar, and I wasn’t going to be able to fit the whole thing in the bed of the glowforge at once. I thought about using the passthrough, but instead I made the buckle loop/tail retainer a separate piece that attaches to the body of the belt with chicago screws.
The idea was to be able to just replace that end section if I needed to adjust the fit farther than the punched holes allowed. The idea worked… kinda. I replaced the original loop with a slightly longer one, and I over-torqued the screws. Now I can’t get them back apart. Good thing the second version fit!

Great job on the collar! Don’t worry about the collar getting covered up—she’s so gorgeous I tend to just look at her anyway. Nice cat too!

stitching frustrations aside, leather is really rewarding to work with!

(Thats right: too much Whisky =Zelda running around naked in the park

I’ve got a stack of leather materials that I’ve purchased; inspired by all of the posts here. But, I still haven’t done anything with it. I’m so far behind on projects that I’d like to complete that I don’t know which ones to prioritize anymore.

Don’t worry about the collar getting covered up—she’s so gorgeous I tend to just look at her anyway.

The dog is gorgeous.

Update:
After a couple months of wear, Zelda’s collar is holding up very well. I did not do any kind of finishing, coloring, dying, or staining… other than letting Zelda wear it daily, in the studio, around town, into the river, the woods, and the desert.
I have been surprised but pleased to see how the leather has weathered. 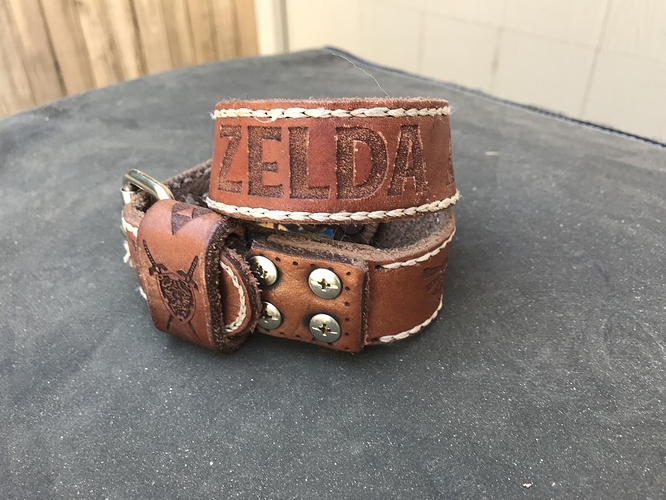 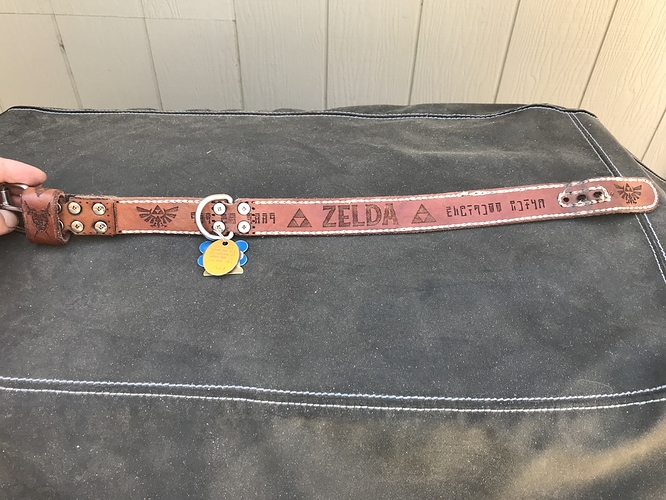 I think Zelda must scratch less than Rio! His has largely held up quite well but managed to start breaking the saddle stitching from scratching (not that the stitching is actually holding anything together…)

about a year after the last update, this is what the collar is looking like now: 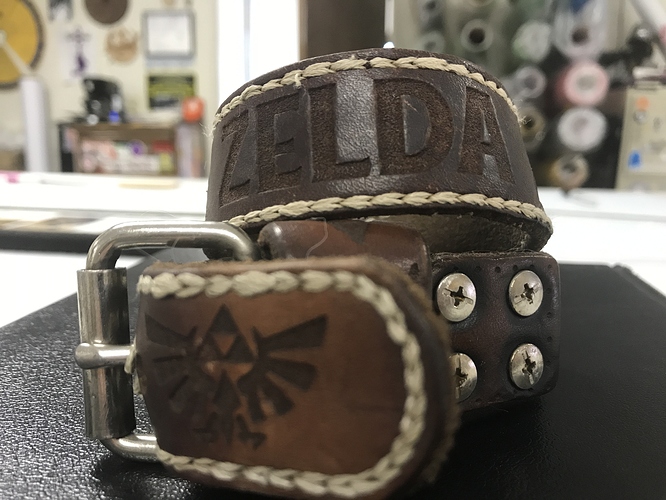 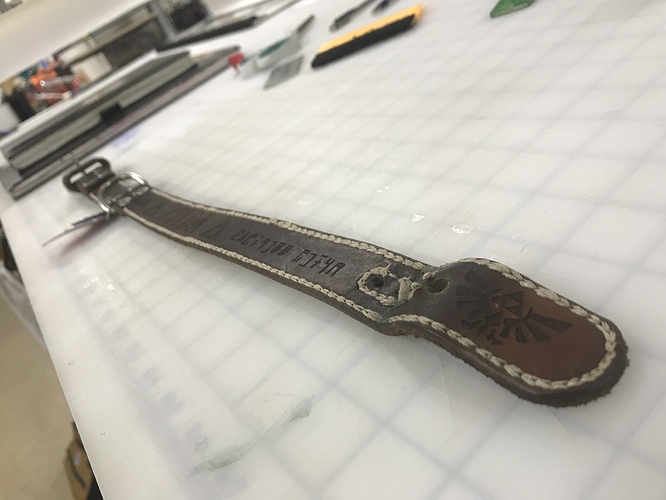 noticeably darker, starting to lose a few stitches, but all together holding up great… @jbmanning5 yeah, Zelda does not scratch too much, she’s too busy shedding.

Hindsight being 20/20 you should definitely use a darker thread next time!
I love how leather ages when exposed to oils - even furbaby oils

Wow, the older it gets, the better it looks! (To me anyway, I like the darker leather)

What was the issue with the stitching, making the holes? How did you do that?

This was my first (ahem… only) stitched leather project. I watched a youtube video. The stitching is decorative, but I didn’t figure that out right away. I had some kind of thought that it would help the leather retain shape or something. My stitches were not as consistent and tight as they could have been, and I used a… single-thread chain stitch? Easy for a beginner, but not the most robust. one break and a little tug is all it takes to start the unraveling.

The holes were just tiny circles cut with the GF, and I could have made them a pinch bigger. A nice, waxed thread would have been great, but what I had on hand was some hemp string (leftover from tying up brown paper packages, obvs).

older it gets, the better it looks!