1/8 acrylic not cutting through and PG Setting

I have better luck using the PG setting to cut my acrylic but I get weird marks on it, I have been playing round with the settings to get round this. I used 150 speed and 85 Power, no weird marks but not all the pieces were cut through. Weirdly the tiny pieces within the butterfly cut fine but the actual butterfly didn’t. Everything on the sheet were cut in the same job. Some came out easily and other I had to snap them out with visible break points on the piece. 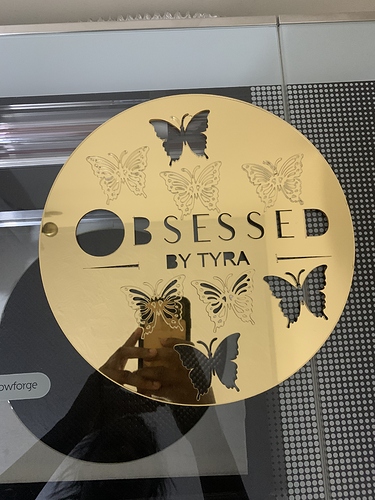 Please any one know when everything is not cutting through? Also please how do I find out the PG cut settings?

You’re really close to the proper cut settings, most likely. You want to use just enough power to reliably get through the material, and no more. I’m guessing that you’re like 5 speed points too fast or 5 power points too low.

If you’ve not done it, this is a good test:

Click the arrow to the right of Proofgrade Cut when using a Proofgrade material setting and it will show the setting.

Acrylic get hazy marks from the heat of the laser and the mirrored acrylic is especially sensitive to it. (It’s been discussed a lot and you can search the forum for ways to minimize it. ) Acrylic sheets have a lot of tolerance, so some areas are slightly thicker than other areas and that can account for differences in stuff cutting through or not. Acrylic gets very hot when cutting and the smaller or more intricate the cut, the hotter it gets. So I’d guess the small pieces cut through because they got a bit hotter than the larger areas.

To see the PG setting just click that little arrow on the right. 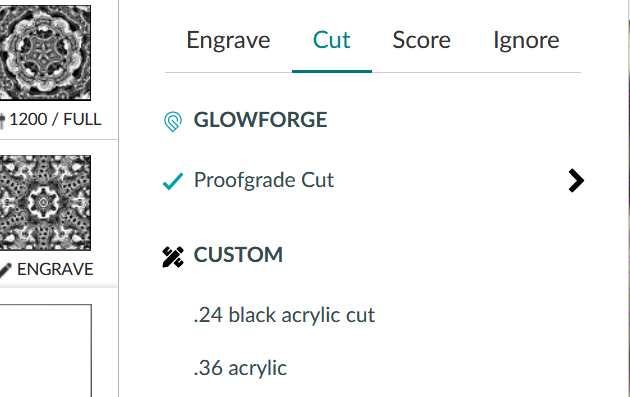 Here’s one discussion about it.

1/8" thick mirrored acrylic... how to not burn the backing mirror? Beyond the Manual

high all… I’m to cutting 1/8" thick mirrored acrylic. I’ve used PF medium acrylic setting and it cuts like a charm, but is burning the mirror backing a bit. I’ve tried a couple other settings and either burns or doesn’t cut all the way through. anyone with experience cutting mirrored acrylic?

A link to a bunch more

I have been glued to the forum since I ordered. And masked both side including cutting face down. Now its down to getting the right settings without the hazy marks - is that what its called lol

If your file for this design has each step nicely separated out (inside cuts vs outside cuts), then you can make a setting for the inside cuts and have that in the first space of the LH sidebar. The outside cuts could either have 2 passes, or use a different power setting that is reliable.

I would have thought more power means it will deffo cut

The hazing/danage your’e seeing is overburn, caused by to much power.

Generally, you get best results when you cut hot and fast, but I’m sure you’ve tested a bunch.

My gut says run a test at full power, vary the speed, and find the right speed that cuts reliably with no damage to the acrylic. Double mask the bottom if you have to, pretty sure we already had this conversation, I seem to remember this topic from a while ago. I’d probably put a piece of cardstock underneath it, then put the masked acrylic on that, then run the cut test. The cardstock should absorb any extra laser energy and prevent flashback, and you’ll find exactly how fast to go to allow you to use full power.

Have you tried putting something underneath the acrylic to raise it off the tray? The metal honeycomb gets hot and can cause little “flashback” marks on the back, so putting something underneath it helps. (I also cut with it the grey coating side on the tray, but it can work both way.) And I agree with Kelly and would not move anything before checking to make sure it cut through, That way you can run another pass if need be.

thanks, i am running a test cut now varing the speed and power.

I don’t believe that’s the mechanism here. I’m pretty sure it’s straight reflection, not heat. The thermal mass and conductivity of that comb probably prevents it from getting too warm. With that in mind, if you block the reflection you should see no flashback.

The reflection off the tray is by nature going to be diffuse, but the material is directly on it, so it burns. Lifting the material up would allow the light to disperse before it hits the backside of the material, thus preventing it from being concentrated enough to damage the back of the material. The end result should be the same, but the mechanism is totally different from what I understand.

Lifting might get the job done here, but for most things I find that a layer of cardstock and proper “just enough” settings does just fine.

Fire needs oxygen, fuel, and heat to get going. You’ve got the fuel, sure… but the layers are smooshed together, so there’s not a great deal of oxygen that can get in there. That just leaves heat. If you are cutting quickly at high power it’s surprisingly generally less fire risk than lower and slower, because of [insert nerdy thermodynamics stuff here]. I’ve done this cardstock trick many times with no issue, but like anything you put in the laser, especially acrylic and other synthetic materials, watch it and be careful.

Lol at the nerdy stuff🤣

So I just place a corrugated board or the pg draftboard underneath the mirror? Do I need to glue it together? And I’m guessing I have to adjust the heights?

So I just place a corrugated board or the pg draftboard underneath the mirror?

I’d say no corrugated, that allows oxygen through all those little channels. Cardstock or draftboard should be ok though. I like cardstock because it doesn’t leave smoke residue, draftboard will.

Do I need to glue it together?

And I’m guessing I have to adjust the heights?

Cardstock, not really, it’s so thin. Anything significantly thicker, yes.

Ask @rbtdanforth about his adventures with thick zebrawood sometimes, it’s a prime example of this phenomenon.

It is certainly true that 3/8" of anything provides more fuel than 1/8" but a lot of that fuel has to be turned into a gas to start a fire. As for heat transmission, you merely need to get the material wet and see how far away the evaporation happens and how fast.

Beyond that, each individual species of wood is different, both in how easily the smoke gets ignited and also what it takes for a coal of that wood to remain lit. Zebrawood is particularly problematic on both those points easier for the smoke to ignite, and once ignited will start a coal that can stay burning after the laser has moved on, and if left alone could slowly burn everything like the coals in a barbecue. This is different than Acrylic that does not form coals but if hot enough dumps flammable chemicals into the air that burn and heat up the material in a runaway fire.

Thanks will try the PG setting with a card stock

The PG setting is probably going to be overpowered. They want to be sure that cuts go through, so in general PG settings are a little aggressive. I would strongly recommend doing that test routine that I posted earlier. It’s the only way to be sure that you’re cutting with just enough power to get through and not too much.

Thanks so much for you help

Hopefully it works all the time lol

I raised my acrylic with another piece of 1/8" acrylic using your settings (150/100) and it worked perfect! Thank you.