Something strange happened this evening - I was cutting a pass-through slot project(3rd or 4th - following the tutorial set up by Jules which probably doesn’t matter, because it could be any file where you have a few cuts set to “Ignore” and you run each one in succession.

While the head was moving over to measure the material before the Score I heard a crunching noise like wood splintering. Could not see any problems and started the print.

The Scores that ran were not even touching the first set that I printed previously. Now I had tapped the Left Arrow key 2 times withOUT holding shift in order to move the score lines, but they jumped a lot farther than they should have. In all my time setting things up, 2 taps of the arrow keys do not move files by 6-7 mm.

The 2nd cut was now 1/4-inch to the left, something that’s never happened on other multi-cut prints that I’ve done. 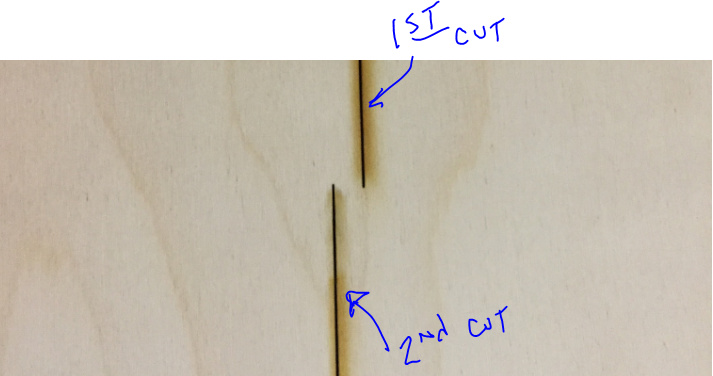 I removed the material from the bed, restarted the GF, deleted the file and uploaded a new one and the laser now seems to just print 1/4 inch to the left

I’ve now reprinted on new material and every cut is farther to the left than expected, but no crunching noise and the cuts have lined up between pausing, ignoring, starting next part of the layered file.

I’m not sure if there’s anything you can do, Support, but maybe you’ll see something on the secret back end?

My advice…
Turn it off <-- This is the most important first step.

Turn it off <-- This is the most important first step.

Done and done - nothing there that could be in the way. Everything feels smooth. I have also cleaned the rails within the past 2 weeks - definitely not 40 hours of printing in that time, but i gave em a good rub down with lens wipes again.

Also have taken the crumb tray out 3 times in the last 2 weeks to make sure nothing is in the dimples.

was there a camera update in the middle of the print?

The screen has never been fully skewed to one side before like this after prints, either. The image is kind of expanded in all directions, with a clear center point, and the file lines are a lot closer to where the camera captures the cuts afterwards. Now everything is fully skewed to the left. 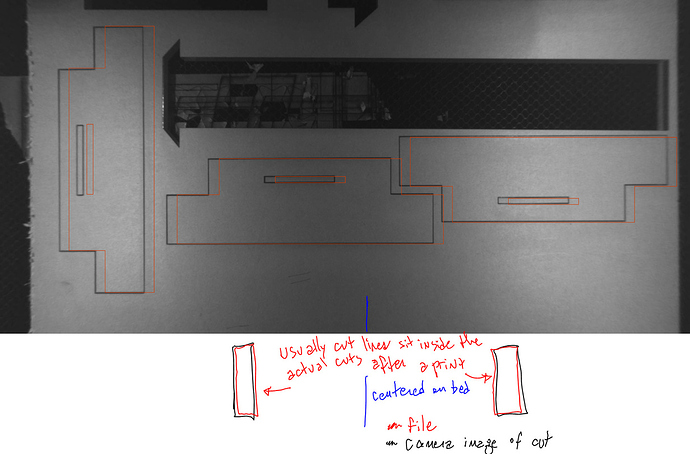 was there a camera update in the middle of the print?

Not something that happens.

So! What I suggest is using some

settings and render something from the catalog. Something small. Doesn’t need to be a big test. But do it under the camera. These eliminate variables.

Turned it on today to do as you suggested @Tom_A and 3 prints were as placed, then i moved one over to the edge of the bed and heard the clunk again during the measurement phase.

The very next print was completely off. 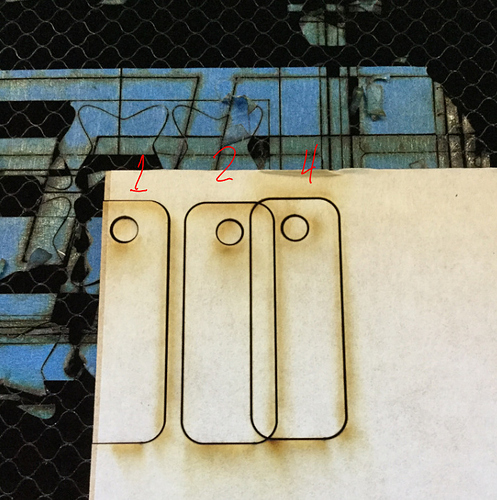 Going to turn it off, move everything around again & give it a shot.

Was able to reproduce the clunk noise and now the head is off by 1/4 inch again.

The clunking noise seems to be the teeth on the belt sliding on the wheels as it attempts to slow down the head. How to clean?

Perhaps the X belt is not tight enough. Does it seem under similar tension to the Y belts?

Without any sort of tension measuring tool all i can say is… yes? Seems to be the same

Thanks for letting us know about this, and for taking the time to provide the videos. It looks like your unit is experiencing an issue that we can’t resolve remotely. I want you to have a reliable unit, so I’m recommending we replace this one. I’ll be in touch via email to sort out the details. I’m so sorry for the bad news.