Hi all, this is my first post and I’m still relatively new to Glowforge

I want to cut out these macaws (this is copy paper to test on with score settings, but final version will be printed paper stuck to birch hardwood with 3M adhesive and cut) They are 2.3 inches tall. 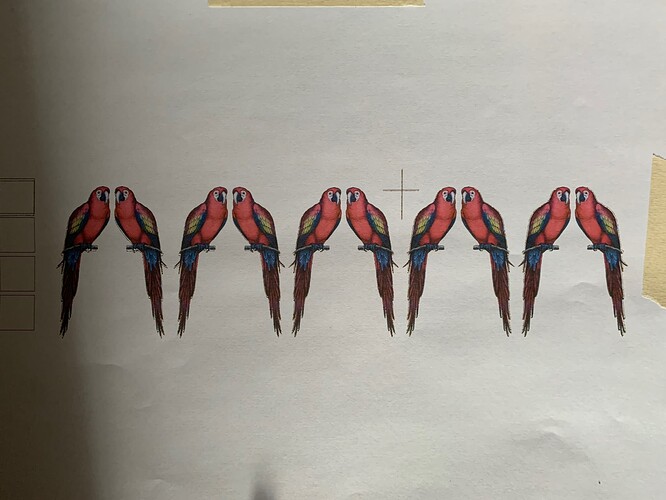 I can get pretty accurate alignment if I do one set of birds at a time and place the material directly under the camera, use set focus, and then visually align the cut lines.

But I would like to cut more than one set of birds at a time. So I created a file with a row of 5 sets of macaws. I used illustrator, and putting the macaws to color print on one layer and the outlines to cut on another layer. I then saved the outlines as an svg and uploaded to Glowforge. When I opened them in the workspace the first thing I did was lock all of the cut lines into one group to preserve the spacing.

Then to test I printed the macaws on some 20lb copy paper and placed that into the Glowforge, using masking tape to keep the paper in place.

Then I selected the correct material, and set focus on the third set of macaws from the left, near their heads. You’ll see I also have a cross which I thought might help with visual alignment. (Along the left side of the image I have four squares to use as tests before cutting the full file.)

(Also, I did print the cut lines on some paper and then held up the macaws and the cutline page to the window to make sure they did in fact lineup.)

Now here is where things get odd. If I line up the cut lines with the macaws where I have set focus, the macaws on the right and left don’t appear to be lined up. Okay, well that could be because of the wide-angle camera distortion, so I do a test score on the paper. Nope, the macaws where I set focus look pretty good, but to the left and right they are off. (You can see those score lines in the image above)

Anyone know why this is happening? If all the cut lines are locked and have been sized and aligned correctly in Illustrator to fit the printed macaws, why is it going ever so slightly wonky?

Since the cut files are all locked together, and sized to fit the printed image, shouldn’t I be able to correctly align one portion of it, and have the rest of the cut lines then match their respective macaws? What am I missing here?

Or can someone point me towards a better way to do this, that isn’t one set at a time directly below the camera?

I have done the camera calibration, and that seemed to help, especially with the macaws where I set the focus, but it did not solve the problem.

I do not have snap marks, and I have seen the link here for the thread about how to get perfect alignment, but that post is about using a jig, which won’t work here.

Double check that your cut lines come in the correct size in the GFUI, sometimes they shrink depending on you’ve saved the file. (Setting your AI art board to 20”x11” helps)

If that is checking out correctly then search the forum for a wealth of info on using jigs , they’ll save your sanity.

I think a bounding box type jig may be helpful as it was in this instance: Print and Cut: Thirty-two Cats

Also, are you certain that the printed material is not being distorted by your printer ever so slightly? When I was struggling with a print and cut project, it was my laser printer and not my Glowforge that was changing things ever so slightly.

Thanks @ekla! In double checking the size of the cut lines I am seeing a discrepancy! What’s interesting is that in illustrator all of the birds are the same size, yet when I import them to Glowforge the left and right facing birds are now slightly different sizes.

This, I think, will be pretty straightforward to fix!

I had looked at some of the posts about jigs, but just wasn’t sure how to apply them to this application, since it would require using the same sized board each time (easy) with the birds glued to the exact same spot on the board each time (not so easy!) But I’ll keep digging and see if there is something that might work here.

Oh, that cat post looks really helpful, and should help me get my brain wrapped around how to actually use a jig for this. Thanks!

Also, good point about checking that the printer isn’t distorting the image as well.

Thanks for the help @ekla! @katvecchio, could you let us know if you need any further help at this time?

No, the responses were very helpful and I don’t need further help at this time. Thank you!

That is great news! I am so happy to hear the community was able to help

I’ll go ahead and close this thread. If you run into any other trouble, please start a new topic, or email us at support@glowforge.com. We’re here to help!