Alignment way off without opening the lid at all.. this is new

I have never had an issue with printing being off from what is on my screen… until this new “update” yesterday. I have been incredibly happy with the microalignment of everything in the center of the laser and most of the edge until now. My alignment is WAY off without ever touching the laser… this is the cool down picture after I cut the first tester… this is severely off. That IS where I put the file in the preview, but you can see where it actually burned. If I cut it again, it does cut perfectly in the exact same place, however.

I found that it was off by about the same amount yesterday… is there something simple I can do to get the whole camera to line up correctly that I am missing in the posts? The problem with looking through old posts is that the software is constantly changing so something that worked last week may be pointless or useless now… 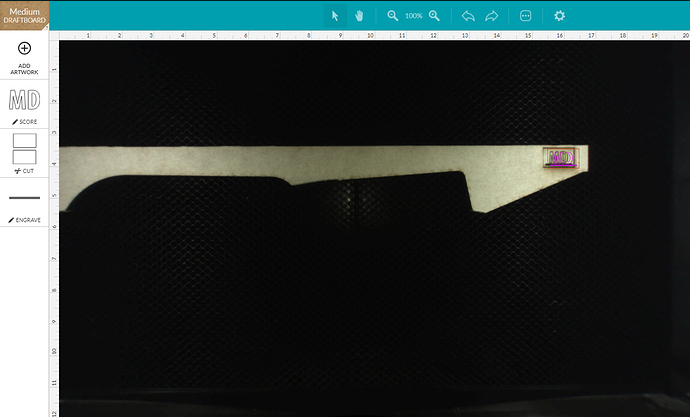 Yes, my alignment has been off by an equivalent amount under the new release.

(Seen it happen before when they roll out a change…everything gets wonky for a bit. They’ll fix it.)

I was like WTFFFFFFFFFF. I had JUST made dog tags a few days before and I had it perfected and then I do a large batch, flip them and then the backs did not line up and my whole acrylic sheet was ruined… my expensive tortise shell acrylic from Inventables.

This is no bueno and why on earth would they not insure that wouldn’t happen when something is rolled out.

I’m pretty sure it’s not a deliberate thing - but bugs are likely every time they roll something out…it’s an unfortunate fact of trying to change something this complex.

Sux about the acrylic though.

I will just be sure to do a trial every single time for a while. Lesson learned. lol

Yep. I do a lot of testing at the moment myself.

It notifies them that there is an alignment issue if they haven’t been notified by anyone yet. (Someone has to be the first.)

They’ll close it when they’ve seen it.

It’s a good reminder to everyone to test often since the backend is undergoing constant updates.

Such an important cautionary tale.

What works one day can change in a flash. (techy pun)

Lesson learned is that if it’s mission critical (you’ve got expensive material in there), a test run is needed every_single_time you run.

I can’t stress enough the need for GF to alert us to any changes in behavior, posted within the GFUI, prior to running a job that uses any settings that have been affected by a change.

NO! This has to be heard.

Edit: GF should reimburse you for your wasted material.

Out of curiosity, were the backs and fronts in a single file where you ignored one side and then flipped the material and changes the ignores?

Or even 2 separate files setup with the same locations for graphics?

As long as you don’t try to eyeball everything repeatability had been good, even across files.

The thing biting me it’s autosave…

It was one file that I just scooted off the backs to the side (which BTW I was SO grateful to see that there was an out of bounds we could use like Illustrator!) and then I put the pieces back in after I flipped them over and they cut about .25" off from where I put them. The first cut was off too, but I didn’t think about it… so I guess that was my bad.

I’ve been planning some two-sided work, and my thought is to put alignment holes/marks off to the side/corners, similar to how newspapers and cereal boxes have for color alignment…

Has anyone else done this or similar? I’d hate to rely on the camera even if both sides were being printed back-to-back…

If you’re planning to cut the material as well as engrave it on both sides, it’s super simple.

Thank you, Jules. Much more accurate than trying to use the camera to re-align with marks/holes…

I’m sorry that happened, @rubbersoul79. Could you please let me know if you’re still experiencing this issue?

bugs are likely every time they roll something out

And that’s why exhaustive testing should take place prior to rolling something out.

True, but even with exhaustive testing, bugs always have a chance of making
it through.

bugs always have a chance of making

Of course. I’m not talking about things “having a chance.” I’m saying it’s NOT okay that “bugs are likely every time they roll something out.” That simply shouldn’t be likely with proper testing. In fact, it should very much be un likely.

I’m a network engineer. Before I roll something out that will affect a large population, I test with every scenario I can think of… “People here use this.” “People there use that.” “These folks use this hardware.” etc. And all of that testing happens in an isolated space first, then with a small test group in an actual production environment. After extensive testing by that test group, then it can be rolled out to production. The chances of a bug at that point is very slim.

And, to be clear… I’m not saying that Glowforge doesn’t test properly. I have no idea what their rollout procedure looks like.

I’m not disagreeing with you at all. It’s just the “chances of a bug [being] very slim” does not mean no chance. I get a little frustrated when folks expect software or hardware to be 100% bug free; it’s just not realistic.