I have been trying to figure out new designs that won’t break into pieces when bent the 360 degrees needed for this shape.

This herring bone is the first to work in a while. 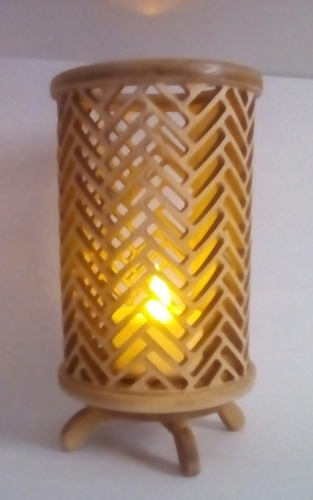 I have also reworked the lamp and legs part so the light does not slide so much but the lights are many different diameters. 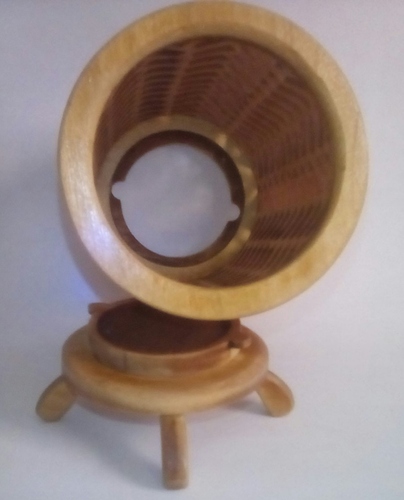 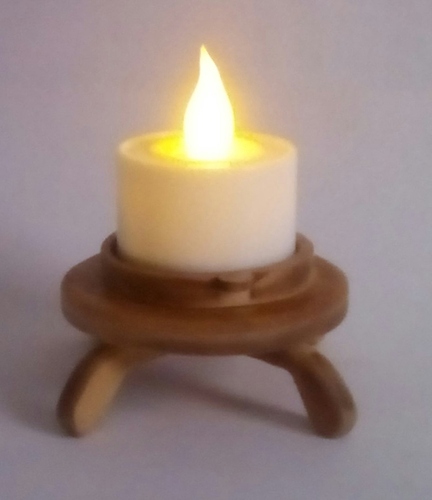 This design is lovely!

This is really slick.

What woods are you using here?

What woods are you using here?

The screen is 8" wide basswood and poplar for the rest. But there is 12"wide oak waiting in the wings.

Beautiful! I haven’t tried a tea light holder yet, which is odd, since that was ‘way up high on my list of potential projects while I waited for my GF. This gives me new incentive to get busy and make that happen!

This gives me new incentive to get busy and make that happen!

I had a lot of expectations about bending wood that did not happen, but then again I was also expecting 180 degrees to be the max possible.

This is so elegantly simple. Nice pattern. One thing is to get the cutouts the right size with respect to the surface area and other dimensions in the design. You really knocked it out! So to speak. Such good designs.

The screens that have worked best so far are all 1/8. I have tried 3/32 and 1/16 but they are much more fragile, but then I ran out of that early so improved design and technique may lead to better results. I have some 10^x 1/16 in fancier wood (oak, mahogany, & walnut) but I am not ready to take those on yet.

Have you tried dampening with warm water for your initial bends? I got that as advice from some parametric hinge tutorials I read before I did a book cover project and it seemed to help.

(My greatest issue faced was even using highest grade laser-oriented Baltic Birch, I still encountered places on the 3,2mm ply where laser cut wouldn’t fully penetrate—I assume from either an interior ply adhesive or knot-like density. And those resulted in some weak spots in my hinges.)

I’n wondering if you could get a large bore curling iron and with the damp wood do a steam bend.

Steam might be a good idea if I had a means to do steam properly. the big advantage being that the hot wood would dry quickly, instead I am using an alcohol base, but again getting everything even is hard, and wood that would come around to the bending, will break if it is done too quickly. So even after it is very soaked I bend it still soaked in solution over a day, and it may stay in solution another day or more bending more each time i get to it so in the final bend it is not such a big change. And still I get a lot of cracks I have to repair or even have it break up altogether.

if you could get a large bore curling iron

Have you tried your process from different directions of grain to see if one way or the other worked better for you? I found in my tests that the parametric hinges seemed to bend easier when the hinge is parallel to the wood grain, but is a little stronger when the grain goes perpendicular to the hinge. But that’s only my non-scientific finding.

But that’s only my non-scientific finding.

I have done that and even bent plywood that seems the best for living hinges. This stuff in contrast is as stiff after bending as before and just as fragile / stiff when dry as before bending. Once the top and bottom are glued in place it is as strong as it will ever be. Just how strong that is depends on the pattern and thickness, and I hope material.

I have only bent the one piece of plywood and that broke due to a bad place in the material.

I have just now finished another in the series that had sort of worked before and the screen came out well but many other problems.

Someone said that sometimes it is not worth the extra time a thing might take, which if fine in hindsight, but most of these pieces would not happen without the patience to see it as far as it can get.