@johnbrooker, this is for you. In my mom’s stuff from Japan, an antique hand-made silk fan. It’s SO fragile, the silk is starting to fall apart. 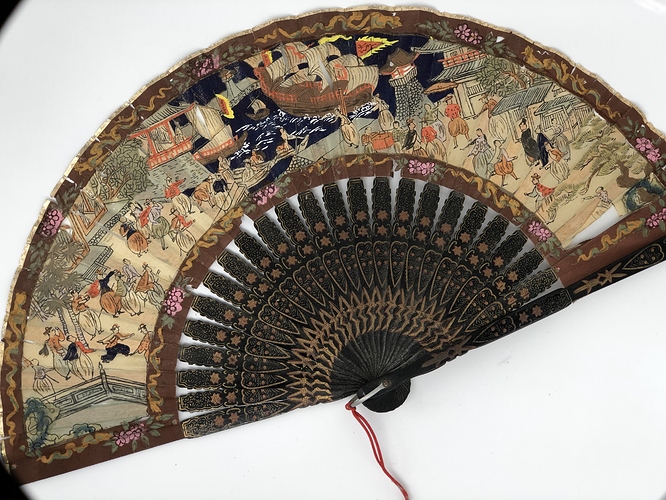 Wow ! This is so different.
I’m sending you a pm.
John

So, everyone, @johnbrooker has generously offered to guide me through the process of building a frame to protect and display this beautiful fan. Yay! I’m thinking it might be interesting for others to know about the process too, so we’re going to do it here in the forum to allow others to observe.

While I’ve yet to research this, I suspect this might be of Japanese origin, though the style is of a type known as a ‘Mandarin’ or ‘Thousand faces’ fan, made in China in the 19th century, for export to the European market.
With any antique fan, you need to take a decision as to whether to keep it folded up in a drawer, only to be brought out to show, or if to frame it for permanent display. Strong light is not good for any painted object, nor in this case, the silk that the leaf is made from. (The fans mentioned above were more commonly laminated paper leaves.)
Once a fan has been left open for more than two weeks or so, the leaf will ‘set’, and great care will need to be taken to re-fold it.
So, off we go.
My preference for frame design is to keep it as simple as possible, not to attract attention away from the fan, and to be in keeping with the culture of the fan, in terms of form and color.
I also greatly dislike fans being mounted in rectangular frames, so this project will be to follow the shape of the fan.
So I need

If it helps, it was purchased in Japan, at least 60 years ago while my grandparents were there as missionaries.

You could of course make a handy protractor on your

if you can’t find one

Looking forward to watching this thread-really cool item and very interesting! Doesn’t hurt that I got back from my second trip to Japan just a bit ago.

An alternative to measuring the angle is to measure the distance across, corner to corner. It will allow me to draw it out then.

Right, there will be a short recess while I create an outline of the fan - out.
John

Something adrift there !
It ought to be about 950mm looking at the photo !

This is a fabulous chance for a remote collaboration to be done ‘live’, so to speak. Though a fan and a frame for it are not my cup of tea, the entire concept of this is fascinating. Thanks to you both!

Ack. I’m going to start over. The engineering ruler I was using has funky numbering – all the previous measurements are double what they should have been! I’ll re-measure and update the measurement post.

… or an overhead pic alongside two conveniently placed rulers, like you would use to sell stuff on eBay…

Okay, @johnbrooker, I fixed the measurements. The corner to corner is correct – the others were wrong.

Here’s what threw me!

I think the “50” up in the corner was a clue that I would have understood, back in 1979 when I was actively using this ruler.

Best I can do with a printed protractor – the open angle looks to be about 176 degrees. (The engineering ruler does work well for drawing lines on paper, fortunately!)

If I’ve managed to get this right, this should give us an outline of the whole fan, close enough to set out the frame construction.![Fan1|20x12]
Slight pause while I remember how to upload an .svg !!

As you have a basic, and I’m now used to designing with a pro, I’ll use an approach that builds the fan from a number of pieces around the periphery, rather than the single pieces that the pro enables me to do.
However, the approach is the same, i.e. drawing a series of concentric lines around the fan ‘template’, to layout the different parts - backing board, walls and front. As I’ll illustrate in due course, by selecting different lines, or pairs of lines, the frame can be built up, layer by layer.

Do you have access to a bandsaw, or any way of accurately cutting a semicircular backing board, in one piece ?
(I’m using 3mm hardboard from Lowes for my work.)

My brother @timjedwards has a pro – I’m sure he could be persuaded to cut the larger pieces for me, so go ahead and design it that way.