I’m waiting for my glowforge to be delivered and am working on prepping my first project for it using Adobe Illustrator. I used a parametric box creator to generate a base model. I wanted one of the finger joint edges to be a straight edge, so I added a rectangle to cover the joints and merged the shapes. This worked but left anchor points on the path where the finger joints used to be. Here’s what it looks like with the path selected. 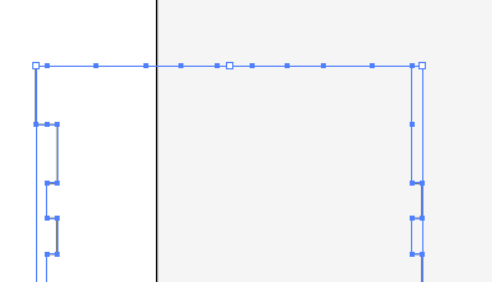 So my question is this: are the extra anchor points problematic or can I leave them in? Will they impact how the laser head moves as it cuts the file? I know having separate paths results in some differences, but this shows as a single path in the layers window, just with extraneous anchors.

A few extra nodes won’t matter. If you’ve got thousands of them (which can happen with some curved CAD files that get imported) it can get stuck rendering.

How is that for non-committal?

It really depends on the design. It can add a little bit of extra processing but if you don’t have an absolute ton of them, it’s not that big of a deal.

Thanks yall! I figured I could either experiment and potentially find problems myself, or I could ask you awesome folks and get a quick easy answer :-). This place is great.

You could always use the direct selection tool to select the extras and do a “delete anchor point” operation. If it’s a file you will use a lot it might be worth cleaning it up a little.

Yeah, cleaning up that kind of thing is pretty easy on something like a box where you have lots of straight edges. I usually try to clean up all of mine.

Cleaning up the kind of mess you get from a CAD export or an auto trace can be a lot more work. (But also more likely to be necessary.)

Yes, just yes.
Extra points can cause issues for any computer controlled cutting device. Get in the habit of sending the cleanest, simplest files to your devices to avoid myriad headaches. (Have spent hundreds of hours troubleshooting bad files for CNC, vinyl cutter and laser. I don’t recommend for the sake of your sanity.)

Three possible cleanup methods in Illustrator:
A) manually remove extra points with Delete Anchor Point Tool (grouped in with the Pen tools, looks like Pen with a minus sign)
B) select your object, then in the menus Object>Path>Simplify and play with the sliders keeping an eye on the result to make sure you like what it’s doing.
C) Use the Smooth tool (grouped in with Pencil) to selectively simplify (select your object first or it won’t do anything), click drag over complex lines and watch extra points disappear. This is the method I use most.

Great tips! I’ve been doing option A and while true, it’s not difficult, its a redundant manual task I’d like to remove. That’s the programmer in me

I believe there is a simplify operation in illustrator as well? My CAD programs have it so I assume illustrator does, would be another quick way to remove them

As mentioned, you can use Simplify. Might take a little tweaking of the settings to get your desired result. Here’s a little movie to show you where it lives. You can also just use the remove anchor tool (press minus key to quick access it) and manually click on points to remove.

there are several AI plug ins and scripts out there for excessive point removal ranging from free to >$100. You could always roll your own, how’s your AppleScript/JavaScript/VB Script?

I write javascript at work. Technically typescript, but it’s a superset. Though I think I’ll just use the built in tools or already written plugins rather than reinventing the wheel

. Thanks for the tip