No literally… The surgeon who I do much of my research (not what I was showing at MFNY) is one of our colo-rectal surgeons (if you came to the booth you saw the colon segment). He saw the plaque I made and said “hey you should make me a desk sign”… So: 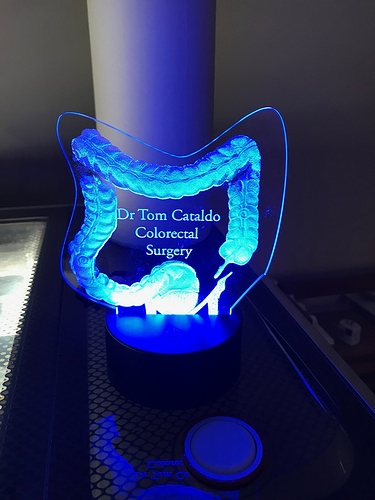 Oh, that came out great! Prettiest colon I’ve ever seen!

What an amazing sign! I’m sure he will be blown away by this!

Wow. Got a real 3D effect going there.

Cutting the acrylic the colon shape adds so much to your design. It is very professional looking like all of your projects.

Hate to say it, but I like your colon.

What can I say…

Seriously, though, it came out really well. Much like his patient’s digested food does not.

I’ll see myself out.

So Doctor, what do you think of the rectum as a whole?

Never thought I would say I liked a colon…but I like that one. You did a fine job!

Now that is awesome!

rectum as a whole?

Rectum?.. damned near killed Him! Ha!

I’ve been waiting for that for 4 hours.

This is brilliant henryhbk! Do you mind if I steal the concept and adapt it a bit? (Bet you never thought someone else would want to do this huh!)

I’d like to do something similar and to cut holes along part of it so I can put real sutures in it. Hubby would love it He recently hit the two year mark after going in for a semi-minor laparoscopic repair of an adhesion of his colon/bladder from diverticulitis. Almost lost the SOB on the table as it turned into a 8 hr surgery to save his life. His ureter was destroyed and had to be reattached and he lost a good chunk of his colon and other bits and pieces to infection. Who wouldn’t want a glowing reminder of that!

Can you make a half-sized one for me?

I do C# programming, so i only need a semi-Colon

Darn! I was 6 minutes too late with a semi-Colon joke!

She probably appreciates it.

Bowser and Blue, one of best and underappreciated Canadian comedy duos ever.

@henryhbk I think our buddy will appriciate. I’m sure it’s biographical.