my lid camera can’t see the entire bed. when i lay a full 20x12 sheet down, centered left to right and moved all the way to the front of the crumb tray, it can see the bottom right corner, but the top and left of the sheet are off camera and when i import a file that takes up that full 20x12 space, or even 19x11, for that matter. it won’t let me print because it thinks it is too big. i don’t know why i didn’t mention this sooner, but it is definitely becoming an issue. 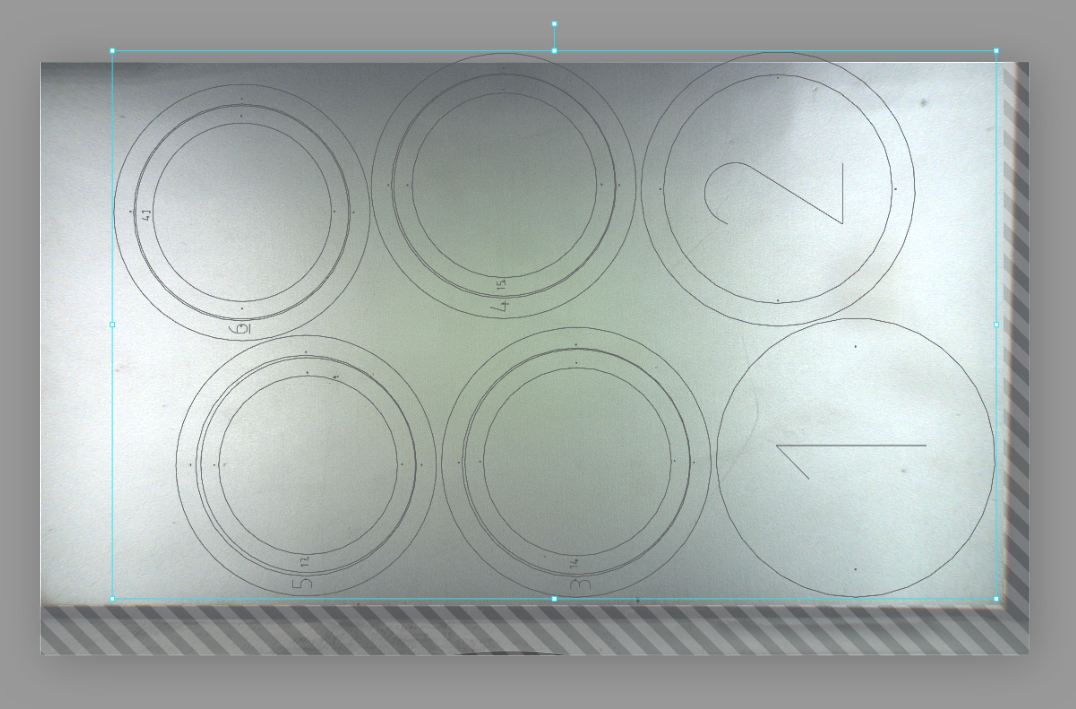 They are working to make the usable area larger.

To do: When the laser is moving at maximum speed, it needs room to slow down near the top, bottom, and both sides. We’ll be updating the software to compensate for that so it can give you more working space - up to 11.5" x 20.4" for slow movements like cuts; a little bit less for faster motions like engraves.

Even though the GFUI is not showing you the full bed, it is showing the full usable area of the bed. For examples of what the camera sees, take a look at this post:

How We Troubleshoot Problems and Support

How We Troubleshoot Using your Glowforge should be a delightful experience. You should be able to drag your design into place, add material, and click print for beautiful results every time. You should never hit a snag. But if you do, we’ll get you back to creating amazing things as quickly as possible. Some of you have asked to learn more about how we solve problems for customers. Here’s some of what we do to research and solve problems as quickly and efficiently as we can, as well as some sm…

So, for now we need to design within these limits.

As a suggestion to help work around this, try ignoring the top three pieces and cut the bottom ones. Then shift the material down and cut the top ones. Not optimal, I know, but should be able to get your design made without wasting material.

Yes you probably bought it to cut 20x12" like I did as it said it would 2 years ago. Currently less but now only promised to 11.5" in Y. No idea why because the crumb tray is bigger than that. The head can move further than that and the camera can see further that. @dan, why do we need to lose 0.5" in Y? A massive disadvantage when the material is 12" and I can’t see any physical reason for it. If I write my own software will the machine be able to cut 12" in Y?

There are a lot of issues known to those of us that read the forum. But it’s very important for those that are planning to accept a GF in the current state of completeness to carefully read the email asking whether you wish to accept or not. The current bed limitation is one of those issues. None of the limitations were important enough that I would delay acceptance, but others need to determine that for themselves.

From the current acceptance email:

If I write my own software will the machine be able to cut 12" in Y?

Yes but the 11.5" limit is nothing to do with acceleration because it only engraves horizontally. It only overshoots in X.

Looking at it, I’m thinking they might actually have trouble ever releasing the 11.5" front to back since a tiny bit of variation of camera position when closed would be enough to take a bit off of that. They can compensate for this, of course, if they have a way of precisely measuring the camera position relative to the rails, but…

Yes but there is more space to move backwards.

No I pushed it all the way to the back before measuring to the door. Looks like a hair over 11.5"

I went and measured it again a little more carefully. It looks like a little under 11.75" to the pro flap. If you took the pro flap out of there, maybe you make it to 11.875".

And by pro flap, I mean the rigid part that is holding the pro flap.

OK perhaps that is the physical limit. Other people have implied it was bigger.

You can’t see the head in the camera shot so that means there must be about half the head width towards the back.

Conjecture on my part, but it looks like they made the rails and belts so that they could achieve the 12", but perhaps the head ended up a bit wider than they thought or when they decided to line the case with metal, it shrunk the interior space more than they thought, or both. Because it looks like mechanical interference is the problem.

The head hangs out in front of the gantry by a fair amount, so if you’re willing to count the overhang space (Shapeoko does I believe), then you’ve got more space. But humorously you still have unused tray under the tube in the back and space in front of the tray in the front. (Also, you’d have to defeat some safety mechanisms.)

My response wasn’t to you. Just a reminder that folks should read the email before they accept. Not a criticism of the OP either. Simply that thoroughly reading the email rather than skipping to the “Accept” button will mean fewer surprises for those that will get the email tomorrow and beyond.

Yes but I was replying to your quote that says it needs space to decelerate vertically. How is that true? It only engraves horizontally. When cutting and scoring it stops at the corners of the artwork, it doesn’t overshoot.

If they can’t attenuate the power smoothly all the way down, they probably ought to decelerate paste the corners and do a little loop. Didn’t you propose something like that a long while back?

Yes I did but they don’t do that or attenuate the power. Having seen how they do grey scale engraving with dithered 3 bit PWM I don’t know why they don’t attenuate power. It seems quick and easy to do to me as are many other software deficiencies.

Thanks for the answer @johnse, that’s right.