Can I make iron on transfers?

Hi. I have a very old cricut which does not let me upload my own designs. I want to make a t-shirt for a friend.

Funny story… my buddy was playing ping pong at a friends house on a second floor that overlooks the first floor. He went for a long shot, slipped, and ended up bashing into the banister which gave way. He fell and broke his pelvis. He is otherwise OK but will have to spend the next two months in a wheelchair. He is in good spirits about it, so this is a great time to start making fun of him.

I designed this shirt for him. I just need to figure out how to make it. I would love to laser cut something that I can iron on to a shirt. Otherwise, I am willing to learn about screen printing. Any suggestions? 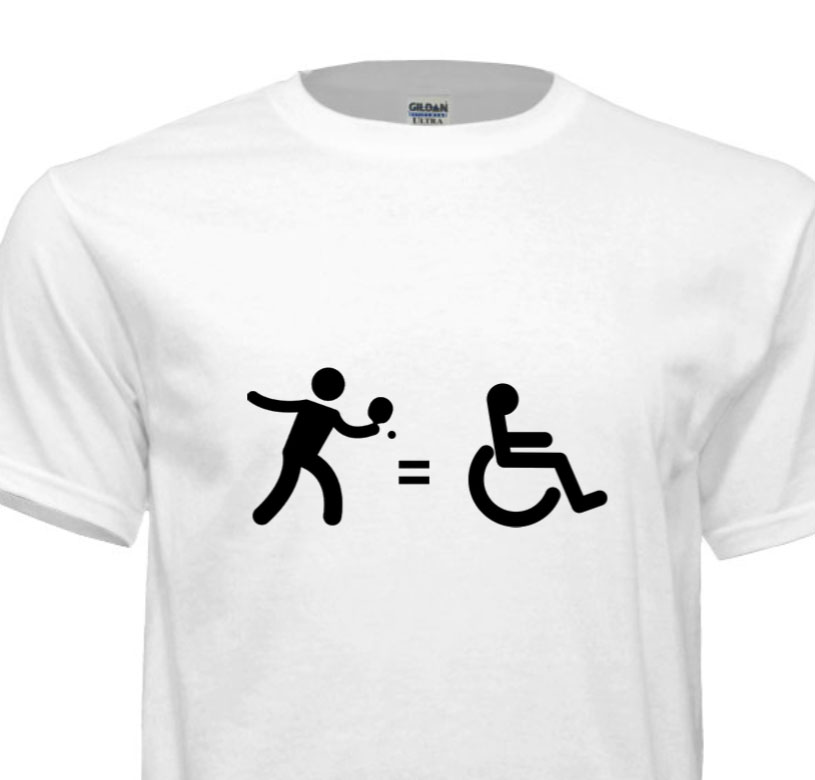 I’d cut a stencil and use it to apply paint. You can’t cut iron on vinyl with a laser cutter.

That is what I thought. Thanks

Have you thought about just using an iron-on transfer paper for this?

Not as sexy as using the laser, but for what it is…

Or the bleach route…

Etching denim (again) Everything Else

Maybe this avenue would work? It was posted earlier on the forum.

You can’t cut iron on vinyl with a laser cutter.

This may not be entirely true. Basically you don’t want to cut PVC, and “vinyl” often is a lazy shorthand for “polyvinyl chloride”… but siser says that’s not always true:

Heat Transfer Vinyl refers to a specific decoration method where a material is designed to be cut, weeded, and applied to various fabrics with heat. Make your own custom garments in minutes!

So apparently they make some polyurethane heat transfer film. It might work for you, but I’d be sure you know what you’re getting.

canadian link but, here you go

Yes, you can cut heat transfer vinyl that is urethane based on the laser. Trotec and Epilog show how on their websites.

Yep. Siser heat transfer works, which is what you’d want for a t-shirt anyway.

Johnson Plastics has this LazerFlex stuff:

I have some and, haven’t tried it yet.

I don’t know of any current HTV (Heat-Transfer Vinyl) that is actually made from vinyl; it’s all PU (polyurethane).

I just spoke with the customer success team over at Siser North America, the makers of Siser HTV. Their logo has the byline “Heat Transfer Vinyl”.

They (and many others offering HTV) do sell sticker/sign vinyl that IS PVC based. Just make sure that what you are buying is PU-based HTV and not sign vinyl. If the seller can’t give you that information, find another seller.

If anyone does develop settings for cutting Siser vinyl, please post. I have a pile of the stuff because I have a vinyl cutter, but have not yet tried it in the laser cutter.

I don’t know what kind of plotter you have, but I can’t imagine the laser being anywhere near as fast for most designs, especially if you were using the no-weeding/ablate all voids method.
Maybe for larger amounts of text, like scripture. (weeding multiple copies of long bible verses in gothic fonts is painful)

I don’t know about speed, but I’ve got a Silhouette and it does not handle tiny bits well. They clog up the blade. That’s one benefit to the laser.

This is at least a starting point:
https://www.epiloglaser.com/resources/sample-club/applique-cutting-laser.htm

It’s for a 50-watt laser, so obviously one should adjust accordingly.

As far as I know the Siser HTV can’t be ablated away for a no-weed final product. (LaserFlex is supposed to allow that but someone on this forum tried it with the GF and could not get it to work, which was a huge disappointment!)

So, kiss-cutting Siser HTV on the GF would just be like cutting with the plotter, and not a time savings… but it would let me use odd-sized scraps more easily. It would also be nice to use the laser on stuff like glitter HTV, which wears out the blades quickly.

it would let me use odd-sized scraps more easily.

that’s a good point. I have plenty of easyweed, I’ll try some tests.

Cool, I look forward to the results!

Can’t you kiss cut the outside of your letters, but straight up cut your voids? You;d jsut need to color-coordinate the shapes in question (voids one color, outer edges of letters another), which may or may not be prohibitively difficult. When you take the sheet out of the GF, all the little cutouts from letters would be left on the crumb tray. You’d then be able to “weed” by simply pulling up the uncut vinyl “stencil” as it were, the negative space. Some transfer paper, and you’re done?

There’s no reason this wouldn’t work on a vinyl cutter as well, in theory.

Can’t you kiss cut the outside of your letters, but straight up cut your voids?

Yes, but you would need to prepare the file so only the right voids were cut.

For example. the green void is safe to drop free, the pink void isn’t, because it drops the inner part of the art.