Here’s a fun project I put together for a friend’s birthday this week. It’s a candle holder, about 4 inches cubed, with a circular depression in the middle to hold a tea light or small votive candle. It’s cut from

Walnut Hardwood but I didn’t have enough on hand. But the plywood looks great too!) 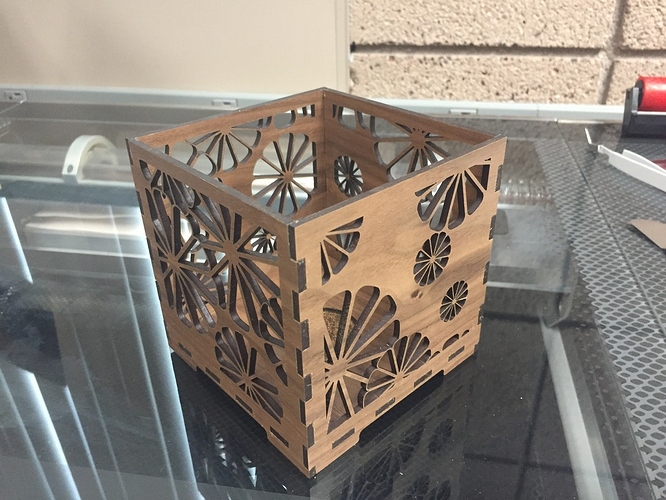 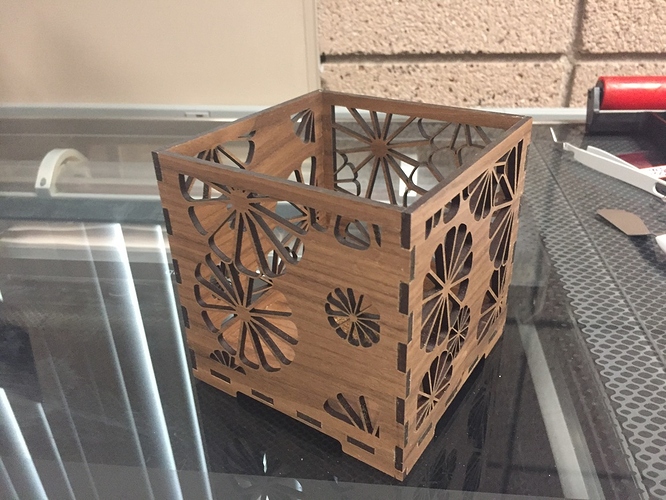 I made a parametric model in Fusion 360 for the basic shape, then added some vector clip art to the sides using Affinity Designer. 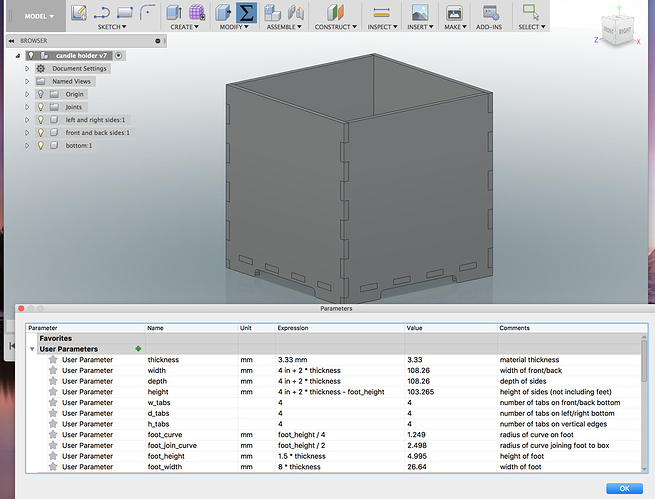 Lots of parameters I can adjust to modify the design in the future, so I shouldn’t ever have to design another one of these from scratch.

At some point when I’ve had a chance to refine it a bit more I’ll probably share it here.

The flowers were designed by Freepik: 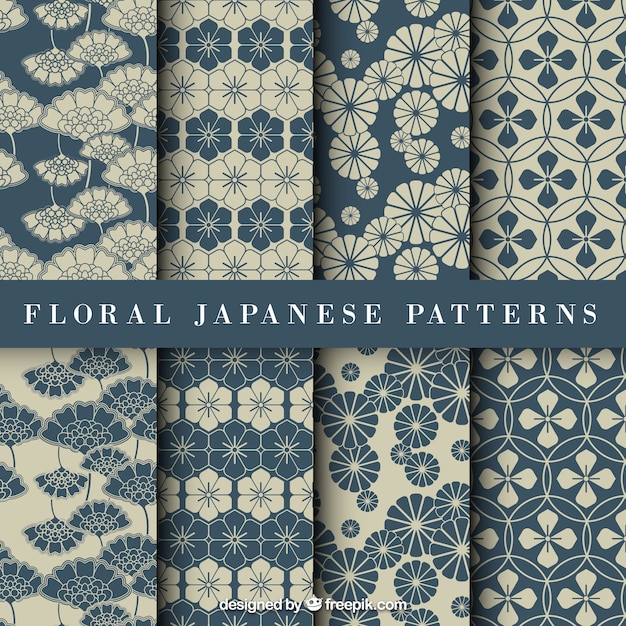 I took the third pattern, tiled it a few times to make a big expanse of flowers, removed the background, combined shapes and did some other cleanup, then took a different random square section of it for each side. I’m starting to get pretty quick at that sort of thing in Affinity Designer.

edit: PDF removed, as I’m not sure the license on the flowers would let me redistribute it. I’ll upload one with my own artwork in the future.

The default Proofgrade settings work great for the cuts and the Dark Graphic engrave setting for the circle provides a nice depression to hold the candle.

I overdid the kerf compensation (I didn’t actually measure what the kerf was on the walnut ply; I just used a number from something else) so it does end up being just slightly tight when fitting it together. Some very light sanding (with sanding twigs) fixed that easily. I used Elmer’s wood glue and held it together with rubber bands overnight to dry. There’s a few spots where I need to remove some excess glue (fingernails scrape it off easily enough) but otherwise I think it looks great.

And don’t forget this is a birthday present, so of course I had to make a birthday card. And once you have a laser, you want to use it for everything: 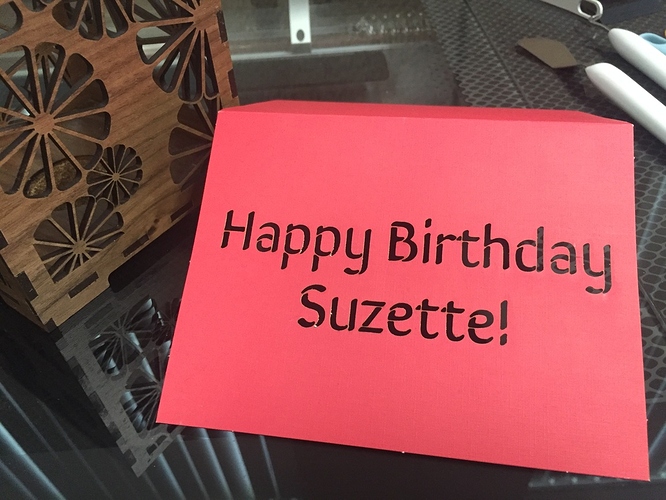 Finding an attractive stencil font to use on the card might have been the hardest part of this whole project. I ended up using Sirin Stencil.

In addition to cutting the front of the card as seen here, I also engraved a message on the inside, but that’s private.

Thank you for sharing. You join the group who so nonchalantly describe a series of illustrator/inkscape actions and make it sound so easy. Nicely done

Love both the candle holder and the envelope! Very kind of you to give links!

We lovers of Glowforge tools, graphics, and fonts can never get enough!

Excellent. Unleashed the power of your laser! Nothing as personal as a specially made gift.

Thank you for sharing. You join the group who so nonchalantly describe a series of illustrator/inkscape actions and make it sound so easy. Nicely done

I’m not sure I’m up to writing up how to make the tiled pattern, but I will show how to get square cutouts of it.

The result, ready to be copied and pasted into your project: 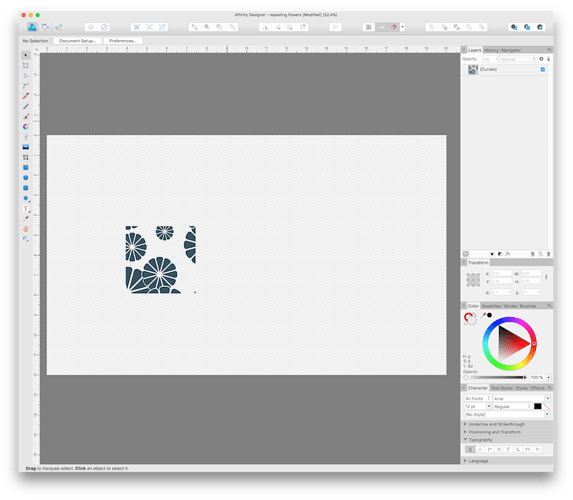 Then to get another square section just hit Undo, move the square, and repeat.

Oh how nice! I’m guessing Suzette will be thrilled!

You are making such beautiful things with my GF, Tim. Lots of great ideas for me to try.

How did you prevent cutting through the back of the envelope? A sacrificial insert in the center?

How did you prevent cutting through the back of the envelope? A sacrificial insert in the center?

I didn’t cut the envelope, just the card. I opened up the card and used magnets to keep it flat on the bed.

Ah, now I understand! My feeble eyes thought the fold at the top was an envelope flap, not the back of the card.

Aha. Yes, the perspective is odd in that photo. The card didn’t want to lie flat.

Beautiful work! I love the patterns and the stencil font was cool to see

This is so cute! Where can i find the link for this file? Love to try and make one.

This post was three years ago, and to my knowledge the file was not available. The OP, however, goes into great detail as to how the project was created and where the designs originated.