Centering an engrave or cut

As suggested by Dan, I am continuing the discussion from The Tested Crew Discusses the GlowForge Delay.

There has been much discussion regarding registration, precision, and coordinates in this thread: XY Home Position

My question for you is how will we find the exact center of an item.

The test: Beginning with a circular material, get the Glowforge to cut a hole dead center. Use that hole to put in an axle (dowel, pencil, whatever) and then spin up the “wheel” to see whether that hole really is centered.

Several iterations are ok, but I would love to know the best process to get to the exact center. I know the folks at Glowforge are pretty busy making the laser; but it seems there are questions about registering more precisely than human-eye visual alignment.

I would love to hear what @staff has to say, and I’d love to see a demo from @norman and the Tested crew, from @marmak3261, or from any other pre-release user.

I would gladly regard the results as where GlowForge is Now, rather than What to expect ultimately. Of course, I’d also love any official commentary on what to expect.

The test: Beginning with a circular material, get the Glowforge to cut a hole dead center. Use that hole to put in an axle (dowel, pencil, whatever) and then spin up the “wheel” to see whether that hole really is centered.

How big of a hole? You can precisely mark the center and use a compass to draw the circle. You can then tell the GF to cut it out…check results…adjust…cut…etc. - Rich

The hole should match up to the Axle.

I’m not near a Glowforge, but here is what I would do:

THESE… .these are the unnecessary steps we are trying to avoid. These are the steps I do not have to do on any of my other machines. We need some modular way to do this without having to cut something out of something every time.

We need some way of registering a virtual location in the glowforge softwre with an exact physical location without having to make a new one every time we need accuracy. I posted a drawing of a homing ruler/square in the XY thread that could be a fix for this situation. It can be magnetic and removable and only necessary when you need accurate cuts.

I would pay extra to have something like that.

EDIT: and as @jkopel pointed out, it can potentially be something we just cut out of acrylic or other rigid material using the GF itself. Didnt even think of that. genius

Thanks for the feedback! We’re thinking of a number of ways to improve in this area, so it’s especially helpful to hear about tasks that you and others are thinking about doing. This hasn’t been a point of feedback from our designers or beta customers AFAIK so understanding the use cases is particularly useful.

Currently on my machine (Not a Glowforge) I have the red dot pointer. I would draw a circle the size of the object in Corel, then place a smaller circle within it using the alignment. Use different color lines so I can make one for alignment and one for cut, like in @dan’s example above. Send it to the laser and use the red dot to line up the object in the bed with the object on my preview screen.
Hoping with the Glowforge you can use the camera to align the outside circle then it would cut the center. Is that the question… whether visually lining up the object shape on the screen with the camera is as accurate??

You can definitely do that. Right now, that will get you very close - within an mm if you use the center of the bed - and soon it will get better. I think the question was doing something that was accurate to a thousandth or so, which was what I provided.

I too would use the method you described on my old laser (or the one I just described).

I see where having the object in the middle would be more accurate since that’s where the camera would be…
This feature (camera alignment) is so much better than what’s available right now…lol
If you want absolute accuracy, cutting a jig would be the best practice…

So just having the laser cut the center circle and the outside one as well, it will be very accurate. - Rich

Yeah i do that all the time i make and give away tops to kids.

So just having the laser cut the center circle and the outside one as well, it will be very accurate. -

My current approach with my current laser cutter would be similar to Dan’s.

I would measure the diameter of circular material and use that to make a guide shape in my drawing software (Rhino, in this case). I would draw a square instead of a circle, but the shape really doesn’t matter. I would make the guide shape a color that will not be cut or engraved (white, for me). Then I’d draw a circle in red in the center of the guide shape. The red will tell the machine to cut the hole. 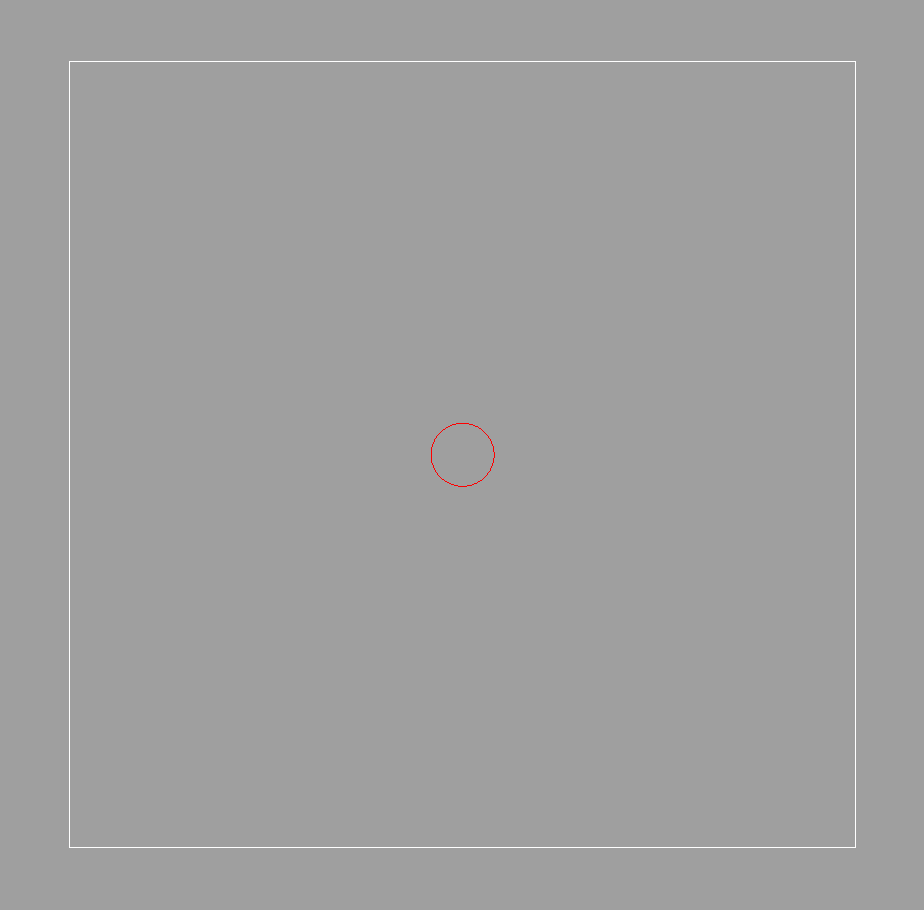 Then I’d put the circular material up against the top and left stops in my machine (similar to the top and left edges of the cardboard that Dan cut). In the user interface of my laser cutter I would align the top-left corner of the white square with the 0,0 point on the screen (it would snap to that point, or I could manually type “0” in the X and Y fields).

When I run the job the hole should be pretty close to the center of the circular material.

Instead of just talk I’m going to record a video showing myself do this. We’ll see how close it comes out…

It would be nice if there were just simple, removable “fences” (removable for the Pro pass-through feature) that when installed, they correlated to some known position with the GF (assuming there is a machine home position or something like that when it calibrates or does a homing routine). And then in the software, one can type in a location as where to put the center of a circle or corner of a rectangle. I know this isn’t as sexy as the draw feature functionality, but I think it’s just as useful.

Use case would be you have a metal disk and you want to engrave/mark/discolor (whatever word we decided on choosing to be most accurate) right at the center of the material. You can’t cut the disk out with the laser. How do you mark it accurately within 0.005" of the center?

For the initial question, I’d solve it by using a mill, a dial indicator to find my center, and drill my hole…not sure if it’s the wrong tool for the job. However, I’m sure there are other circumstances in which this would be required that I’m just not thinking about!

I know this isn’t as sexy as the draw feature functionality,

I’m going to record a video showing myself do this. We’ll see how close it comes out…

EDIT: and as @jkopel pointed out, it can potentially be something we just cut out of acrylic or other rigid material using the GF itself. Didnt even think of that. genius

Before you cut it, glue a vertical strip to the edge (maybe inset it a bit. Then cut out your ruler guide and the lip will help you get it back right where it was the first time by bumping up against the back of the bed.

aye! I think right now this will be the closest we can get to a solid 0,0 corner guide. good idea. I was thinking about tack welding a magnet somewhere on the chassis and then glueing one to whatever material I was using, let them seat together, then cut my corner guide.

Another use case would be wanting to engrave pre-cut circular cork/stone/glass coasters. If you want to laser 20 off with the same image, having a known reference corner that you can just place the coaster against would be very useful.

Once placed in the corner, it would be great to just be able to hit the forge button for the previously aligned image to be placed in the same alignment on the coaster, with repeatability. That way it would save having to realign the image every time; as even with using the camera it’s going to take time…

Having the reference corner would save making jigs and the issue of the jigs potentially moving.