Clock and jewelry for California 420 celebration

Hopefully this wont offend anyone, but here is a clock and some jewelry that I made for my nephew and his friends in California to celebrate 4/20. 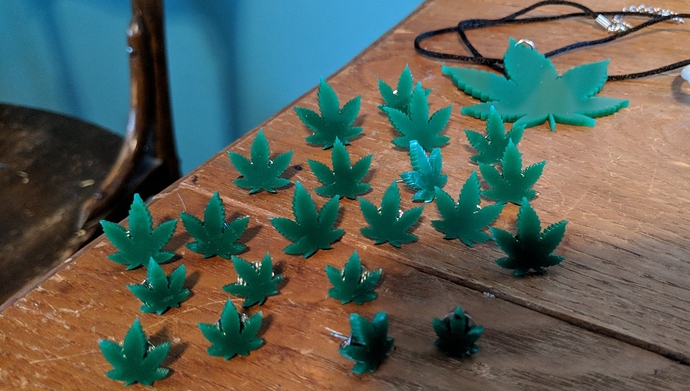 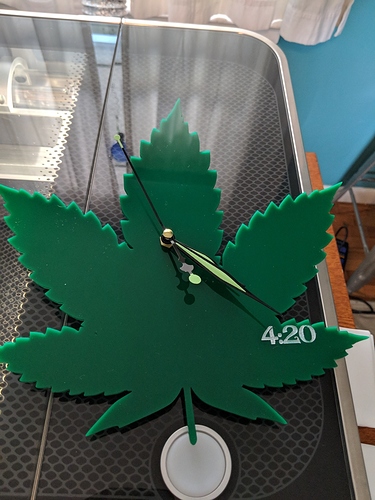 If you plan on visiting Canada ever starting this Canada Day (July 1st) you’ll be able to 420 all the time legally. Nation wide.

I dare you to not see our flag differently after that 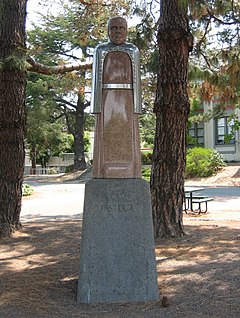 420, 4:20, or 4/20 (pronounced four-twenty) is slang in cannabis culture for the consumption of cannabis, especially smoking cannabis around the time 4:20 p.m. (or 16:20 in 24-hour notation) and smoking cannabis in celebration on the date April 20 (which is 4/20 in U.S. form). In 1971, five high school students – Steve Capper, Dave Reddix, Jeffrey Noel, Larry Schwartz, and Mark Gravich – in San Rafael, California, calling themselves the Waldos because "their chosen hang-out spot was a wall ou...

Ahhh! Thank you. Learned something new.

If you plan on visiting Canada ever starting this Canada Day (July 1st) you’ll be able to 420 all the time legally. Nation wide.

Or if that’s too far north, just stop here in WA state.

Might as well toss Colorado in the mix too.

Might as well toss Colorado in the mix too

And anywhere else additional taxes are needed.

I’m fascinated by the magical thinking that doesn’t believe there are public health consequences brewing. Heck I just saw a report that vaping actually introduces some nasty (primarily metals) substances into your lungs. So much for that safe alternative. Actual burning smoke which is bad in tabacco seems to be transmogrified in cannabis. Interesting science.

And anywhere else additional taxes are needed.

I see that as a big draw for the gubment to allow it. Funny thing is, while it is legal in Colorado, my city does not allow for the recreational sales of it. Medical is fine with all the proper paperwork and such, but it also has WAY lower taxes. If you want recreational here, you have to go at least 1 city over to get it.

I don’t partake, and I really don’t care either way, but there is no denying how much CBD has helped many people.

I see that as a big draw for the gubment to allow it. Funny thing is, while it is legal in Colorado, my city does not allow for the recreational sales of it. Medical is fine with all the proper paperwork and such, but it also has WAY lower taxes. If you want recreational here, you have to go at least 1 city over to get it.

That’s how it is in much of California, too. A lot of cities are dragging their feet on issuing licenses (or outright banning retail locations).

Respectfully please don’t spout refutable propaganda. If you choose to cite a ‘report’ then back it up with a source footnote. Your "science’ is easily snope.com refuted. IMHO this natural alternative to opioids is Gods Gift to humanity. I beg you to educate yourself on the benefits that real life people have obtained - they are easily found. I have seen its results first hand in the suffering of my loved ones, and I pray you never have to find out the way I have brother.

I tell my patients if they’re going to use, then please use routes other than inhaling. Bake it in brownies, rub it on your skin, but don’t fill your lungs up with smoke!

Funny thing is, while it is legal in Colorado, my city does not allow for the recreational sales of it.

A friend of mine just inherited a lot (2-acre residential lot) in Colorado from an uncle. He then received a letter from the local government that he can’t grow marijuana on it without some sort of permit. We chuckled.

Medical is fine with all the proper paperwork and such, but it also has WAY lower taxes. If you want r

What city are you in?
I ask because I moved to the Longmont area a couple years ago and from what I can tell they don’t allow it.

Your "science’ is easily snope.com refuted

You mean this one where the latest science (Jan 2018) is inconclusive because it’s not clear that vaping helps people quit tobacco smoking and outweighs the toxic metal impact of some e-cigs?

Do E-Cigarettes Help or Harm? Report Says Not Clear Yet

A new report wrestles with the potential benefits and harms of the vapor-emitting devices which have been sold in the U.S. for more than a decade.

I understand the emotions around legalization of pot and I also am aware of the negative sides as I don’t have an ox to gore in this and have seen those in over a decade of public health service. Just as many folks on both sides of the issue. Easy to treat one’s own experience as the defining story.

IMHO this natural alternative to opioids is Gods Gift to humanity.

I’m a psychiatric nurse practitioner. I’m neither for nor against its recreational use. I have been known to provide paperwork to patients with appropriate diagnoses so that they can obtain medical marijuana.

Medically, its unfortunate classification by the DEA as a schedule I controlled substance has made it very difficult to research. There’s some promising evidence for CBD in treating some disorders, but CBD is only one of thousands of compounds contained in cannabis, and we have absolutely no knowledge of what most of them do to the human body and brain. And some compelling evidence that some of them may do more harm than good.

I can tell you (based on a much larger sample size than your own) that yes, for some people cannabis is a godsend. For others, not so much. I’ve seen too many first psychotic breaks associated with cannabis use to feel at all comfortable with encouraging its use in adolescents / young adults. Most of those so affected, sadly, have never returned to anything close to normalcy. (Actually I can’t think of a single case where one of them has ever recovered fully.) Is the relationship correlational or causal? I can’t say, definitively. But it’s there, and IMO it’s not worth the risk in kids with their malleable brains and so much life ahead of them to throw away.

In the older adult population, I have some who find it really helpful for anxiety. I have others who say it helps their anxiety, but become paranoid or just outright psychotic when they use. And a lot who become MORE anxious when they use. I have a few who use it to successfully control cravings for other substances (alcohol, meth), and also some who fall back down the rabbit hole of other addictions if they let themselves go back to using marijuana. For every success story I’ve seen, I’ve seen at least 2-3 others that were failures, if not outright disasters.

In short, there’s a lot we don’t know about cannabis. It seems to have some promise for some things, but it’s not the panacea some people try to make it out to be. Like any other medication, it helps some people, doesn’t help some people, and makes some people a lot worse. If it helps you, that’s great. But that unfortunately doesn’t generalize to the population as a whole.

As one of my pharmacology profs used to say, “there’s no such thing as a safe drug.” There’s also no such thing as a miracle drug. If there were, believe me I’d be putting myself out of a job just as fast as I could write prescriptions!

And then I would retire and just play with my Glowforge all day every day!

P.S. An even BETTER natural alternative to opioids are endorphins. Ten times as potent as morphine! You get them by exercising.

P.P.S. “Natural” is a misguided concept. It has absolutely no meaning in this application. For example, cyanide is completely natural, but I strongly advise against ingesting it.

“Natural” herbal substances are chemical compounds, just like medications, just without manufacturing control and oversight, so there’s a lot more variance in purity and actual content / bioavailability of active ingredients. Plus, unlike prescription medications, you can market them without having to prove they actually work.