I made a holder for the coasters. Project’s drone except for a light coat of shellac. 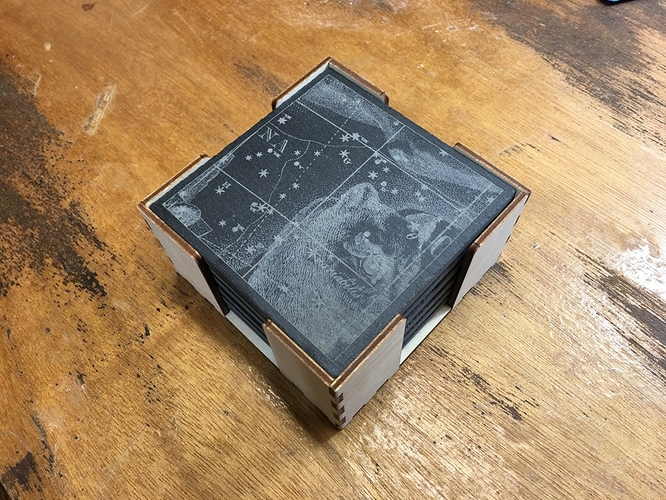 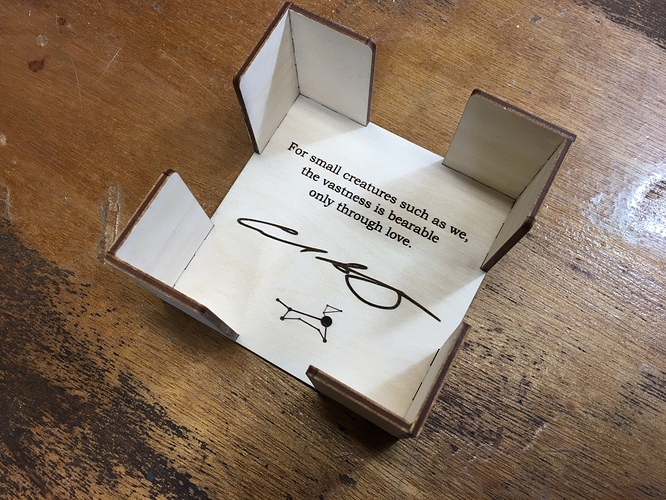 If I were to do it again, I’d give myself a bit more extra room in the box, the fit is snug. Not unusable but snug.

Tiled slate coaster set Made on a Glowforge

It took some work to get it right, alignment of irregularly shaped (and thickness!) slate pieces, but the end result is going to be well-received, to say the least. I think the phrase “She’s going to flip out” is more accurate. Next time, I’d take @kittski 's advice and wipe them with a light coat of oil prior to engraving to make the contrast a bit sharper, but I’m just thrilled. [image] Previous discussion of the project: Edit – Further (final) discussion of project:

What a nice, personalized finish to an outstanding project!

It might be worth noting that that quote is by Carl Sagan, and that’s an image of his signature.

The small star chart is another representation of Canis Major.

Looks great. Where did you source your slate, if you don’t mind my asking?

He gave a link in the above link to the original post.

I like how your signature is on there. I’ve not really seen many others do this, and I have been planning to do the same thing when my GF arrives.

Thanks. I visited and read the original post but overlooked it as an ad. Habit.

Not my signature, Carl Sagan’s.

ha ha…I couldn’t read it. I just assumed it was yours. Still a cool concept.