It took some work to get it right, alignment of irregularly shaped (and thickness!) slate pieces, but the end result is going to be well-received, to say the least. I think the phrase “She’s going to flip out” is more accurate.

Next time, I’d take @kittski 's advice and wipe them with a light coat of oil prior to engraving to make the contrast a bit sharper, but I’m just thrilled. 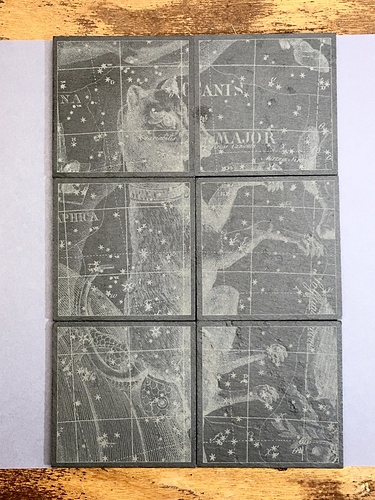 Previous discussion of the project:

Coaster set box/rack Made on a Glowforge

I made a holder for the coasters. Project’s drone except for a light coat of shellac. [image] [image] If I were to do it again, I’d give myself a bit more extra room in the box, the fit is snug. Not unusable but snug. See previously: https://community.glowforge.com/t/tiled-slate-coaster-set/16162

This is spectacular! I don’t think it could be any better. She’s going to love it.

Wow! That turned into a gorgeous gift!

It’s been great following your posts of this project. It turned out wonderful. If she doesn’t love it, I’ll be glad to take it off of your hands

Where did you get the tiles?

Some small online “e-commerce” site. The wave of the future, you see.

Ya know. Somebody was just telling me about them just the other day. Said you could buy stuff using your Computer of all things.

Thanks for the link, just bought two sets, prime one day, will have them tomorrow. I will be lasering them this weekend.

That came out great! Thanks for the link

You might want to pick up some butcher block oil, @kittski 's technique sounded promising…

Really outstanding! You will have to update us on how the gift was received.

I have gallons it for my woodturning stuff.